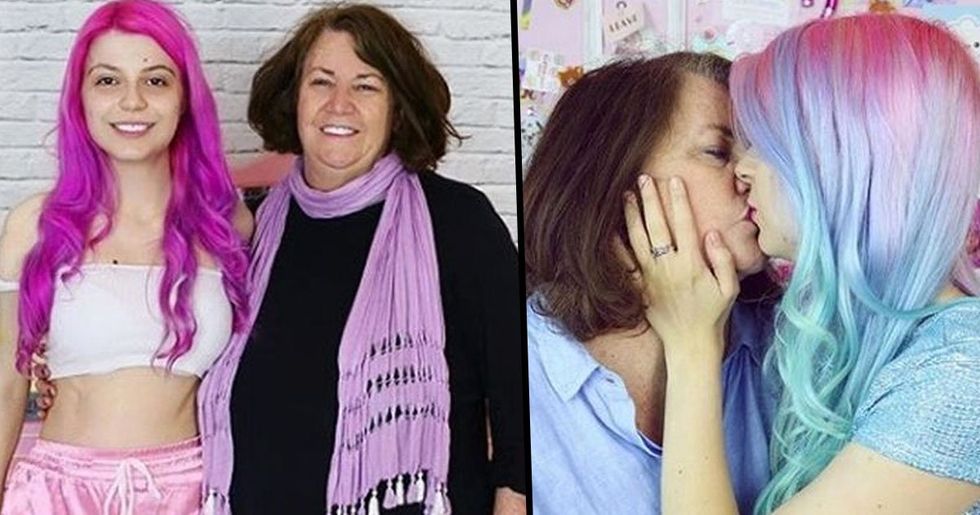 I believe that it is safe to say that we now live in a rainbow world, a world where LGBTQ+ relationships and issues are constantly being addressed, sorted and rewarded. A world where gay relationships no longer have to hide behind facades, such as friendship or roommates. Where same-sex couples can walk down the street without fear of being attacked or alienated by the population around them. In recent years we have even seen the gay community granted the right to marry, allowing them to celebrate their love in many more ways than they could only thirty years ago. But this doesn’t mean that gay relationships no longer fall under scrutiny, even in accepting parts of the world, and especially when the subject of age is also brought into the conversation.

And she’s found success on the video-sharing platform.

And has a devoted fan base.

These subscribers recognise Zelg for her brightly coloured anime hair.

Zelg often shares music videos of her own compositions on her channel.

And her bright pink vlogs.

Zelg also vlogs from her apartment, which just happens to be bright pink. Barbie eat your heart out.

Since joining YouTube, Zelg has not been quiet about her sexuality, which she often discusses in her videos.

Making her one of the most popular queer YouTubers.

Zelg is also in a committed relationship.

Another frequent element of Zelg’s vlogs is the inclusion of her girlfriend Eileen, who she now lives with.

They also own a cat.

The couple have also recently adopted a kitten called Brittany, who lives with them in the London flat.

But something else has happened.

However, there is another element to this tale.

Recently Zelg made a big decision.

On her channel, Zelg recently published a video of her proposing to Eileen.

I’m sorry, but this is beautiful.

The couple originally met on Tinder.

Zelg recently revealed in one of her videos that she and Eileen met on Tinder.

Zelg was not expecting to fall in love.

Zelg had been ready to enjoy her single life, but, in the process found her soulmate.

Showing that love waits around every corner.

We will never know who we will fall in love with, we just have to wait and hope that we find the perfect person.

However, this doesn’t mean that they haven’t faced criticism.

Sadly the couple have fallen under some recent scrutiny, the reason for this being the age gap between them.

In a recent video, the couple revealed their ages to Zelg’s YouTube audience.

And the truth was shocking (to some).

Since this revelation, the couple’s relationship has been greatly questioned.

But the couple had this to say.

When talking about the age gap, Eileen stated that: "Listen Julia is a lot younger than me, and I’m a lot older than her. She’s not captive, she’s my girlfriend, she’s my partner, she’s somebody I love. You don’t think I went over this for months in my mind?"

Seems that some people questioned other elements of the age gap.

From Eileen’s latter comments, it looks as if someone questioned what will happen once Eileen's age becomes a hinderance.

Eileen had this to say:

"I’m not going to take her life away, she will go on long after me and I want her to do that. And I love her so much."

And although they have their haters, the couple is also lovingly supported.

Although some may never truly understand how this relationship could work, there are many others who have praised the couple for their love and pride.

After all love is love.

When you fall in love, that’s it, you’re in love. And these two women really do love each other.

Zelg often posts pictures of herself and Eileen on Instagram.

As to document the progression of their relationship.

And now they have a wedding to plan.

Their wedding it set to take place next year, meaning they have plenty of time to perfect their vision.

I wonder what they’ll wear?

Seeing as Zelg is such a colourful and quirky character, I bet that wedding will be beautiful.

Just another celebration of a couple’s love.

I’m sure many of us can’t wait for the big day.

You have proven to the world that love can surpass age and gender.

Will Brittany the kitten carry the rings?