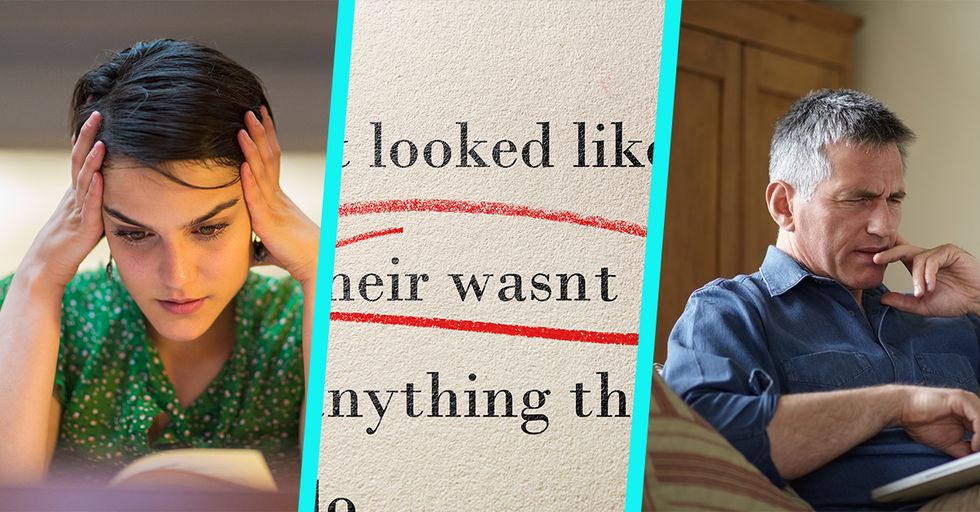 Have you ever run into a phase you’ve just realized you’ve been saying incorrectly for your entire life? Maybe you’ve been walking around saying “play it by year” instead of “play it by ear” forever since actually, playing it by year seems much more relaxing and less stressful than trying to play it by ear, without any music or guidelines on how to do it, but that’s just one person’s opinion. English is weird and we have a lot of phrases that don’t really make sense if you look at the words themselves, but we all know what they mean, so it’s no wonder that sometimes people bucher them even though they know exactly what they are trying to say. But if you’re worried about embarrassing yourself in conversation, check out these common phrases that many people say wrong.

“I could care less" doesn’t mean the same thing as “I couldn’t care less."

To express how little someone cares about something, they often say “I could care less", but when you really think about it, that means they do care! If they could care less than there is some amount of caring going on and room for that caring to decrease. The phrase actually is “I couldn’t care less" because if you can’t care any less, you truly do not care about the thing.

This is a difficult one, because both phrases make sense. “Hone" means to sharpen, so if you “hone in" on something it would mean to sharpen your skills on one thing. Makes sense, right? Even though a lot of people say “hone in", the phrase is actually “home in" as in a homing missile or homing pigeon. As in, picking one spot and going directly to it. So if you “home in" on a project, you are focusing directly on one thing.

Regardless of what you think, "irregardless" is not a word.

People say “irregardless" all the time, but why? They use it in the exact same way one would use the word “regardless," so what’s the need for the prefix? Well, there isn’t one! Actually, the prefix “ir" means “not" so when someone says the word irregardless they are using a double negative. “Regardless" means “without regard" so “irregardless" would mean “not without regard," or the opposite of regardless.

But the word irregardless is a good example of a colloquialism, or a word people use so often, it becomes part of common dialect.

Another good example is the word “literally," which means “exactly" but people often now use to mean the exact opposite of that! Even though we know your friend didn’t “literally" eat a sandwich as big as a boat, we get what she means when she says that. It can be a little annoying for grammar nerds, but hey, good luck trying to get “figuratively" to catch on.

Sadly, there is no statue of limitations somewhere.

As much as we might like to imagine there is a big statue somewhere that displays multiple limitations (I like to imagine it’s of me at an animal shelter holding five kittens and my husband telling me we cannot have five kittens), the phrase is actually “statute of limitations," the word “statue" referring to a law and not a large bronze structure pigeons like to poop on.

The phrase “dog-eat-dog world" means a world in which everyone is out to get each other, a much nicer world would be a “doggy-dog world" as some people mistakenly use the phrase.

But a doggy-dog world sound much better, like a world where dogs are just running around everywhere and you can pet them all and they are all so happy to see you!

And when was the last time you saw a dog eat another dog? I vote we change this one.

The people who didn’t win aren’t the “runner-ups" they are the “runners-up."

This is a fun one! It can be tricky to pluralize words in English especially because we have a few zingers like this where the "s" doesn’t go at the end of a phrase. Other words like this are “cul-de-sac" (plural is culs-de-sac), brother-in-law (plural brothers-in-law), and passerby (plural passersby).

Do you “jive with" someone or “jibe with" them?

This is one that makes more sense the incorrect way. If you “jive with" someone, you get along, you can successfully dance together, at least that’s how I’ve always thought of it. But the phrase is actually “jibe with" which refers to an out-of-date nautical term so if you didn’t know this one, it’s really not your fault.

You do not “nip something in the butt."

The correct phrase is “nip it in the bud" as in, take care of something before it even gets a chance to start, like the bud of a flower. But nip it in the butt is much funnier so let’s go with that.

If you’ve taken Geometry, you should know that the phrase is not “a complete 360".

I have a deep-seated resentment that it's not “deep-seeded."

The common phrase means something is firmly in place, like deep in their seat, not planted deeply in the ground as in “deep-seeded," although that makes sense, too.

It’s actually “case in point" as in something is a example in the point you’re trying to make. However, many people say “case and point" probably because it sounds like something official a lawyer would say after making a really good case in court.

You’ve got another think coming if you think the word should be “thing."

That’s right, the word is actually “think," which is the more grammatically incorrect choice. English! It makes no sense!

What the phrase is implying if that if you think one thing that is wrong, you’ve eventually going to be hit with the right idea, so “another think."

Whatever. This one’s dumb. We can change this one, too, right?

This one is kind of shocking. They both make sense and people commonly use both. However, “for all intents and purposes" is the correct phrase.

Tow the line sounds like it would be another  old fashioned nautical term turned phrase, but actually the phrase is “toe the line" which came from putting your toes on the starting line of a race. The expression means that you are conforming to the rules, so if your toes are on the starting line, you’re following the rules of the race.

You might insist that everyone is treating you as “an escape goat" but actually, you’re a “scapegoat."

The term is actually “scapegoat" but, if you have been saying “escape goat" you’re not totally wrong. The term comes from the words escape goat referring to when goats were sent into the desert in Biblical times to absolve people of sin.

Ok, but what is a barrow? It looks like half a barrel on wheels so I’d say this one is poorly named in the first place.

If anyone has ever said people like you are a “dime a dozen" they were not saying you were a “diamond dozen."

They were insulting you.

The correct phrase is "tongue-in-cheek." t's likely this comes from biting your tongue not to laugh, so your tongue is in your cheek.

Have you been saying you are "hanging on tender hooks?" Not only is that gross-sounding, it's wrong.

The correct phrase is "hanging on tenterhooks." Not sure what a tenterhook is? Yeah, no shame in that. It's an old fashion device that you would hang clothes on to keep them from shrinking. Phrases are... old.

The phrase is "pique one's interest" not "peak."

"Peak" kind of makes sense, so it's an understandable mistake. A peak is the highest point of a mountain, so to "peak one's interest" would mean the have high interest. But that's not the phrase, sorry.

If you cheat at cards, you aren't a "card shark."

The phrase is actually "card sharp," even though being a shark is much cooler.

I've never actually heard anyone make this mistake, but it's funny. There's no lame man who needs things explained to him simply. A layman is someone who is not a professional, so he doesn't have the knowledge he needs to understand what someone is talking about. (He could still be lame, though, we don't know.)