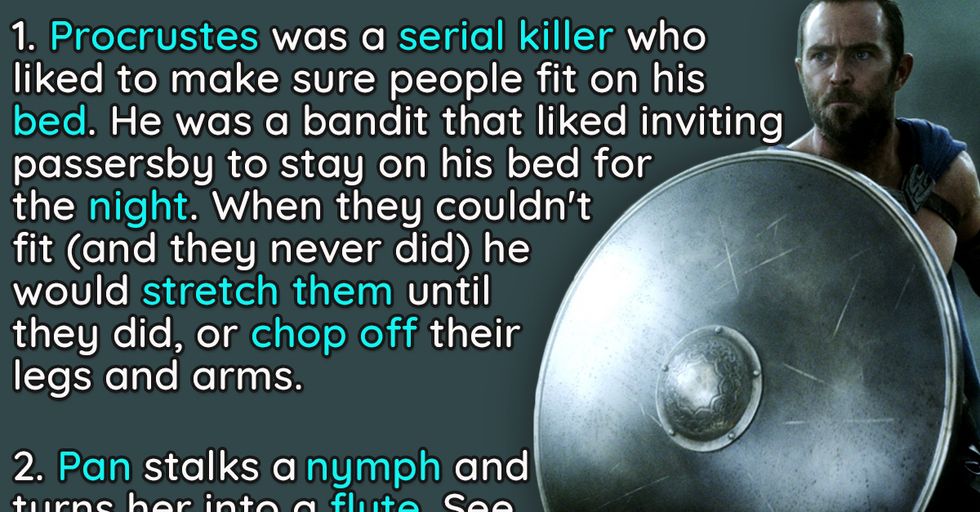 Greek myths are the worst.

No, really. Every last story is filled with rape, incest, bestiality, and people generally just acting like total douchebags. It's a wonder they're taught in schools, because honestly, the lessons they teach are generally never ones to follow.

Here are a few of the most questionable ones.

Zeus, the king of the gods was a rapist. Just how rapey is he? Well sit back and relax because we challenge you to find another figure in mythology as goddarned rapey as the allfather also known as Jupiter (to the Romans).
Take the story of Zeus and Europa, the woman after whom the continent of Europe is named. Europa was a Phoenician princess who was playing on the beach with her friends when Zeus saw her and fell in love with her. So what did he do? He raped her.
Well, to be more specific, he disguised himself as a pure white bull, and when naive Europa, petted him and climbed on his back, he carried her across the sea to the island of Crete, where he raped and impregnated her.
As if that's not bad enough, Zeus also raped numerous other women – although, people keep writing that he "seduced" them. Seriously, who wants to be seduced by a bull? Or a golden shower (no, stop your dirty thoughts rights now) a for-real golden shower, which is what he appeared as when he raped Princess Danaë., mother of Perseus – you know, the guy who killed Medusa.
Then, of course, there was that time he raped Princess Leda by appearing to her as a swan and then raping her. The woman went on to lay eggs – eggs! – but one of the eggs hatched into Helen of Troy, the most beautiful woman in the world... so... upside?

The birth of the gods (i.e., cannibalism, incest and castrations)

The Greek gods were messy – like, super messy. They were basically the Kardashians of their day. For instance, there was all the incesting. See, in the beginning there was Chaos, and Chaos give birth to Gaia, the Earth, who then gave birth to Uranus, the primordial sky god.
This is all good and well, except Gaia and Uranus – mother and son – soon got together and started rabidly incesting. Like so much so that they quickly gave birth to the Titans, the Hekatonkheires, which were 100-armed giants, as well as the cyclops.
Only problem was, Uranus thought his younger children – the Hekatonkheires and the cyclops – looked super weird, so he imprisoned them deep inside Gaia, which caused her great pain... So she asked her children to castrate him.
Only one stepped up to the plate, the Titan Cronus (who you may remember as Father Time). He castrated his father and cast his genitals in the sea (which caused Aphrodite to be born) and then he became ruler of the Titans and married his own sister Rhea and together, they had their own children – the Greek gods. You can guess what happened next, right?
If you guessed that Cronus then ate his own children, you would be correct! See Uranus and Rhea prophesied that one of Cronus's own children would overthrow him (because what goes around comes around) so he wasn't taking any chances. He ate all his children until Rhea got fed up and fed him a stone instead of Zeus. The rest, as they say, is history.

See, on one hand, Athena was totally great. She was the goddess of wisdom and war – she even created olive trees when she and Poseidon fought over patronage of Athens. (He gave the city a salt water spring, and she gave it olives, so the Athenians chose the more practical gift.) On the other hand, Athena was scary as all get-out. But you have to understand her backstory.
See, Zeus was creeping around, as he always did, but this time he made a mistake and crept with the goddess of wisdom, Metis. Only problem was, Metis had been prophesied to have a child much smarter than him, so he swallowed Metis whole.
Some time later, Zeus came down with a pounding headache, so he had his son Hephaestus split his head open with an axe. Out popped Athena, fully formed and ready to conquer. The only thing was, she was super unpredictable.
When her perpetual rival raped her priestess Medusa on her temple floor, you'd think she'd go to bat for her girl, right? Wrong, because Athena turned both Medusa and her two sisters into the gorgons, and then she eventually helped Perseus kill them.
Then there was Arachne, a weaving student of hers who boasted that she was the greatest weaver ever. So Athena challenged her to a contest. Arachne won, but she did so by weaving scenes of Zeus' numerous affairs. Athena was so pissed, she slapped Arachne with her spindle, killing her. Afterwards, she felt bad, so she turned her into a spider, but the point is, Athena – definitely not the most accommodating of the gods.

There were lots of a**holes in ancient times

Ancient Greece was, apparently, filled with a**holes and douchebags, dudes who did horrible things that you couldn't even dream anyone would be so horrible as to do.

Tantalus feeds the gods his son

See there's awful people, and then there's Tantalus. Dude had it all, he was a demigod son of Zeus, and was often invited to Olympus for fancy god shindigs. But did he appreciate his good luck? Nope.
Tantalus would steal ambrosia from the gods and give it to his frat boy friends. Then, when the gods found out, he prepared them a feast... made from the remains of his son, who he'd killed.
As punishment, the gods cursed him to the depth of hades, where he had to stand in a pool whose waters he could never drink, while a fruit tree hung above him that would move out of the way whenever he reached for it. There's a reason why the word tantalize means to tempt without fulfillment.

You ever hear the term "procrustean bed?" Basically, it means "a plan or scheme to produce uniformity or conformity by arbitrary or violent methods." It comes from this one guy named Procrustes who was a bandit that liked inviting passersby to stay on his bed for the night. When they couldn't fit (and they never did) he would stretch them until they did, or chop off their legs and arms. Either method, of course, killed his visitors.

Hera was super cruel to kids

If you ever watched the TV show Hercules, you'd remember how she sent pretty much every monster known to existence his way, but it all started when he was a baby and she sent snakes to kill him. He ended up using them like rattles.
Then, of course, there was the time she kicked Hephaestus off a mountain after she gave birth to him because she thought he was too ugly. Very motherly, that Hera.

Seriously, if dude were in modern times, he would have multiple restraining orders against him. See, there Persephone was, the youthful and virginal goddess of spring, all innocent and whatnot.
Did Hades let the girl live? Did he let her breathe - let her do her thing? Nope. He basically just abducted her then and there, and took her to the underworld. To add insult to injury, he knew Persephone's mother, Demeter, was gunning to get his daughter back, so he tricked Persephone into eating pomegranate seeds. Since she'd eaten the fruit of the dead, she was stuck staying in the underworld half the year, which is why there's now winter. Hades – major douche.

Pan stalks a nymph and turns her into a flute

Here's another stalker that would just not let a girl breathe. See there was this one wood-nymph named Syrinx, who Pan was all into, but she knew his reputation and ran away. When he followed, she had her sisters turned her into reeds. They made a great sound when the wind whistled over them, so Pan cut them down and made them into his pan flute. Even as a plant, Syrinx couldn't escape this stalking douche.