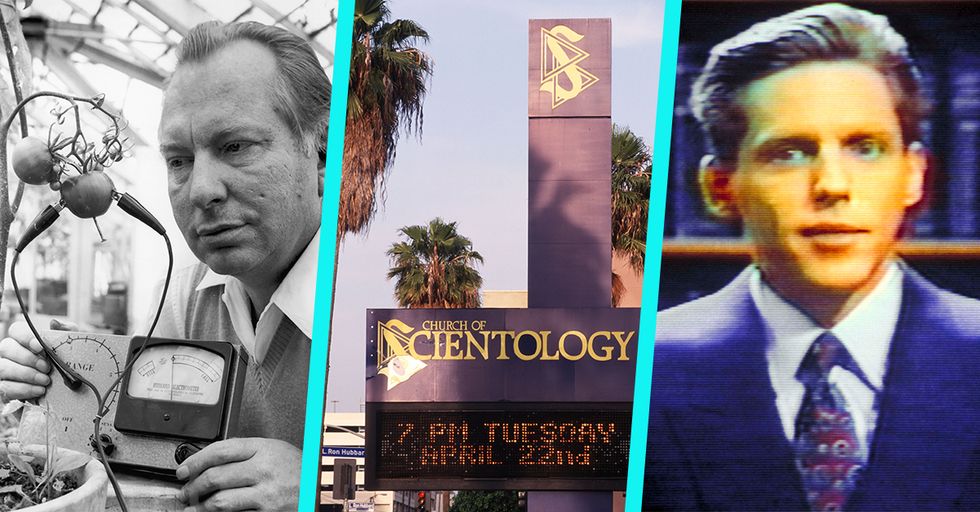 25 Secrets The Church of Scientology Doesn't Want You To Know

A church, a self help organization, a money grabbing scheme - a cult. Scientology has been a subject of fascination for many of us who wonder just what the hell is going on inside those auditing rooms, and why Tom Cruise can't stop jumping on couches about it.

Here are 25 facts about Scientology that may surprise you.

L. Ron Hubbard was a science fiction writer, not a theologian.

Despite having no religious training (or even beliefs), LRH became the founder of Scientology, which claims a million followers worldwide and enjoys tax-exempt status of being classified a “religion." But he started out writing sci-fi paperbacks about spies and aliens for only a penny per word.

And about those million followers…

It’s really more like 500,000 – if that. According to multiple sources, Scientology likes to inflate their statistics a bit to give their faltering organization “street cred." But their minions are leaving in droves, and recruitment is down. Way down.

Leah Remini might have something to do with that.

Leah is a former Scientologist, celebrity, outspoken advocate of ex-cult members, and producer/host of the Emmy Award winning A&E docu-series, Scientology And The Aftermath. Leah pulls no punches as she pokes holes in Scientology’s lies, its false claims about “clearing the planet," and its many cover-ups of abuse. In short, she is a total badass.

As a former Scientology PR heavyweight, Rinder knows all of the tricks his old bosses play – and he isn’t afraid to call them out. Whether it’s creepy white vans trailing Rinder and Remini as they drive to their next interview or an overnight website popping up to slander them in the public eye, Rinder is all, Yeah, that’s what these assholes do. We see you, Scientologists!

Kidnappers from 1980s After School Specials aren’t the only ones who use them! Because, you guys, Scientologists are driving these things ALL over Clearwater, FL, imagining they’re somehow “flying under the radar." Except that as soon as you spot one, you’re like – Hey! Aren’t those the Scientologists who were trying to hand me a pamphlet on the beach earlier? Yup. They are.

Eight-Sided Crosses are also a thing.

It’s a cross - with eight sides! So, whassup with that? Apparently, this symbol represents the “eight sides of life" for Scientologists, which include 1) Self, 2) Creativity, 3) Groups, 4) Humankind, 5) All life forms, 6) Physical universe, 7) Spirituality, and 8) Tom Cruise. KIDDING! The last one is actually God. So, someone slightly less important in Scientology than Tom Cruise. Yeah, I said it. Come at me! <gang signs>

There is no end to Scientology’s “Bridge To Total Freedom."

Leah Remini wrote, “When you reach the top of The Bridge (OTP 8) you will be told that God is a lie for LRH (L. Ron Hubbard, Scientology's founder), and there are more levels ahead that will cost you hundreds of thousands of dollars. There is no end to Scientology." Thus, it’s like a never ending game of Monopoly in which you pay and pay…and pay.

“Going Clear" is a phrase borrowed from computers.

L. Ron Hubbard liked the idea of wiping data off of a computer system, so he adapted the terminology to the human mind. Seeing the mind as a flawed computer in need of a good scrubbing, LRH then instituted the myriad of steps, books, auditing, courses, etc...that were needed to “clear" the bad data out. But these steps will cost you.

“Going Clear" may, in fact, bankrupt you.

A Scientologist who commits to moving up the “bridge" according to Scientology’s orders will likely spend every last penny to their name. You know – your life savings, your kids’ college tuition, your 401K, and your mortgage. And probably a kidney or two.

But good news! “Operating Thetans" can bend spoons with their minds!

SAY WHAT? Well, Scientology claims that once people have “gone clear," they become “Operating Thetans" (OTs) who can control the physical world with their minds. So, no more walking across the room for that midnight snack after all? Nachos, come forth!

L. Ron Hubbard started the “Sea Org" because he was running from the law.

In response to the U.S. government giving LRH some serious side-eye over his new “church," the cult leader took a fleet of ships out to sea hoping to evade the law. While floating around out there, he began spinning tales of his past lives – even taking his fleet sailing around the world to find hidden treasure that he’d buried in one of them. Which begs the question: Was this dude a pirate?

The Sea Org’s billion-year contract assumes you will be reincarnated.

As a below-minimum wage worker. Despite signing a billion years’ worth of lifetimes away when they join the Sea Org, members get paid roughly $50 per week, are forced to do menial labor, forbidden from having children (and are sometimes children themselves), and often report extreme cases of squalor living conditions and abuse on board Scientology’s ships.

The Sea Org is allegedly one of the most abusive “religious" organizations on the planet.

L. Ron Hubbard lied a lot about who he was.

Lafayette Ron Hubbard (yes, the L stands for something after all!) spun wild tales about past lives, but also lied a lot about his actual life. He told his followers that he’d been a military hero, and even healed himself with his mind when injured in the field of battle. But no records have ever been found of LRH’s service, nor his alleged injuries.

He also married a ton of chicks.

Like most cult leaders, LRH was a wife hoarder. He preached against promiscuity in Scientology principles, but at one time was actually married to his first two wives at the same time – although they didn’t know it!

Although Scientology demands its followers live a clean, drug-free lifestyle, LRH was allegedly a big fan of marijuana and amphetamines. And his nicotine habit paired with drinking a bottle of scotch daily certainly didn’t make him the poster child for clean livin’.

LRH ruled by intimidation and fear, as most cult leaders eventually do. If followers committed minor infractions, they would be slapped with the label of “liability" and forced to wear rags while performing back-breaking manual labor.

Some Sea Org members were even thrown overboard as punishment.

The foundation for most of Scientology’s belief structure, Dianetics was LRH’s guide to “getting rid of the reactive mind." The book was never marketed as Scientology propaganda and in fact found an enormous mainstream audience in the late 21st century who merely sought out the text for self help.

The Church of Scientology is currently being investigated by the FBI.

The FBI opened a case in December, 2009, to investigate human trafficking concerns in the Sea Org and at Scientology’s headquarters “Gold Base." Although the organization rarely comments on the status of this ongoing investigation, the case is still open and active.

Despite their claims to the contrary, Scientology has established multiple compounds where disobedient members are sent for “rehabilitation." But people who have escaped such camps report that there isn’t much rehab going on at these establishments. The base known as “Rehabilitation Project Force" is reportedly a camp where prisoners are barely given enough food, forced to do hard labor, and mentally abused.

Raising children in Scientology is scary, even for celebrities.

Until Nicole Kidman and Katie Holmes write their Tell Alls, we’ll just have to piece together the nightmare they went through. According to most reports, both mothers feared for their children, who were targeted at early ages to become staunch Scientologists. While Katie escaped with her daughter Suri before things got out of hand, Nicole’s children with Tom Cruise remain loyal to the organization, seeing their mother as an “Suppressive Person."

Suppressive People are shunned. For life.

In one of Scientology’s harshest policies, families and friends are ordered to “disconnect" from anyone deemed a Suppressive Person (SP) by the church. Naturally, anyone who leaves the cult – or even questions its insane practices – is declared an SP. This official policy keeps followers in line, threatening them with the loss of their loved ones if they turn their back on the church.

Despite the policy of disconnection, more Scientologists are leaving the church than ever before.

After the groundbreaking HBO documentary Going Clear was aired in 2015, Leah Remini and Mike Rinder began their A&E series building off of the truths it unearthed. Remini said of Going Clear, “I think they did an amazing job and they cleared the path for people like me to speak about it." They also cleared the path for hundreds of Scientologists to leave the church, speak publicly about it, and inspire others to do the same.

Tom Cruise could singlehandedly bring Scientology down if he wanted to.

Scientology’s current leader, David Miscavige, is Tom Cruise’s modern day Rasputin. Advisor, friend, court whisperer, and master manipulator – Miscavige has essentially made Tom Cruise’s career his life’s work. Articles have surfaced over the years about Miscavige’s total obsession with keeping Cruise happy AT ALL COSTS, lest the A-list celebrity ever decide to walk away from Scientology. But given the millions of hours of auditing tapes the organization has on Cruise’s innermost secrets, something tells me he won’t be walking away anytime soon. (Nicole! Katie! You are our only hope!)