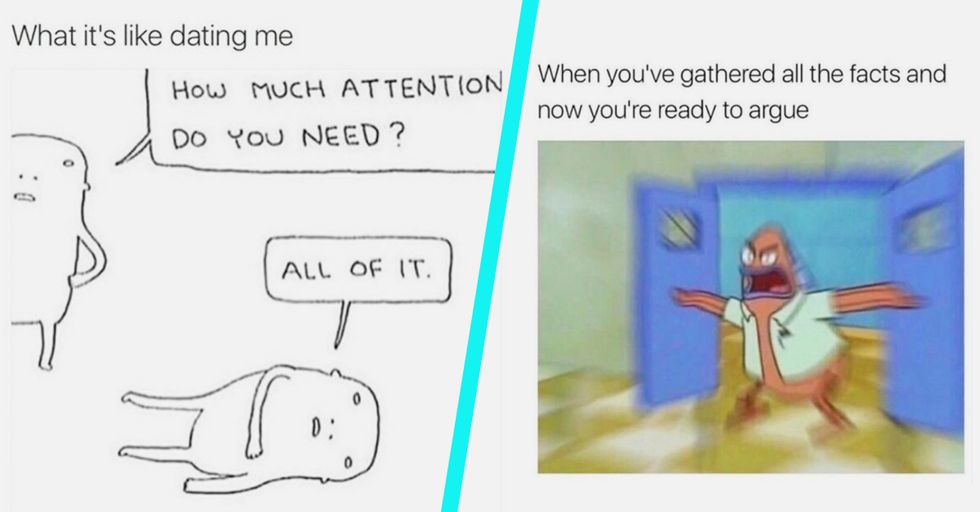 Certain aspects of a relationship are universally relatable. Luckily the Internet is chock full of humorous evidence, in the form of jokes, memes, and social media posts. Peruse them, laugh, share them with your significant other; anyone in a relationship will be able to understand these funny relationship memes!

Here's how you know you've settled comfortably into your relationship:

Sharing is caring! Relationships are just as much about knowing each other's boundaries as they are about doing things together (especially when it comes to cake).

Though conflict will arise, staying connected through the disagreement is important.
Despite the fact that, sometimes, it's hard not to stew over the conflict for a night.
And, of course, there may be bouts of romantic competition (all in good fun, of course).
In a wholesome relationship, both individuals want to learn everything as they get to know each other.
After enough time in a relationship, you both realistically know how long a disagreement is going to last.

Sometimes it takes a particular something to catch your S/O's attention.

Hey, food should ALWAYS be a priority.
As a couple, you’re completely adjusted to each other’s quirks…just not at 6am.

Fighting and flirting can walk a fine line.

In between disagreements, it's impossible to resist throwing in a compliment or two.
After being together long enough, you know the drill: accumulate your arguments, then engage.
It's always nice to know (and communicate) EXACTLY what your needs are in any relationship.

Cute nicknames definitely become a thing as the relationship progresses...

And the more familiar you become with your significant other, the more 'endearing' your nicknames become.

Why go backwards when you've already gone to the trouble of figuring out which cute nickname belongs to which person?

Nbd, just have a question that I need you to answer right now.

Eventually, it becomes easy to pinpoint which mannerisms you pick up from your significant other.
Sometimes you just have to figure out exactly how much your significant other cares. May the truest of love triumph over bowl cuts any day!
After all, it's important to share the things you love with the person you love.
Another important aspect of any relationship: figuring out what constitutes an 'emergency.'

Direct lines of communication are key.

Text when you say you will, dang it.

One (or both) of you may have learned to wait for all of the facts to come in before the rage begins.

Or maybe you've just learned to channel it as a pair. Remember: the couple that rages together, stays together.

When you're enjoying the cuddling only for it to abruptly end:

For the stubborn one(s) in the relationship, getting over your pride can take a good while.

Birds of a feather...

Every couple has their own dynamic and definition of 'fun.'

Whatever the personality type, having a significant other whose personality compliments yours is a beautiful thing.