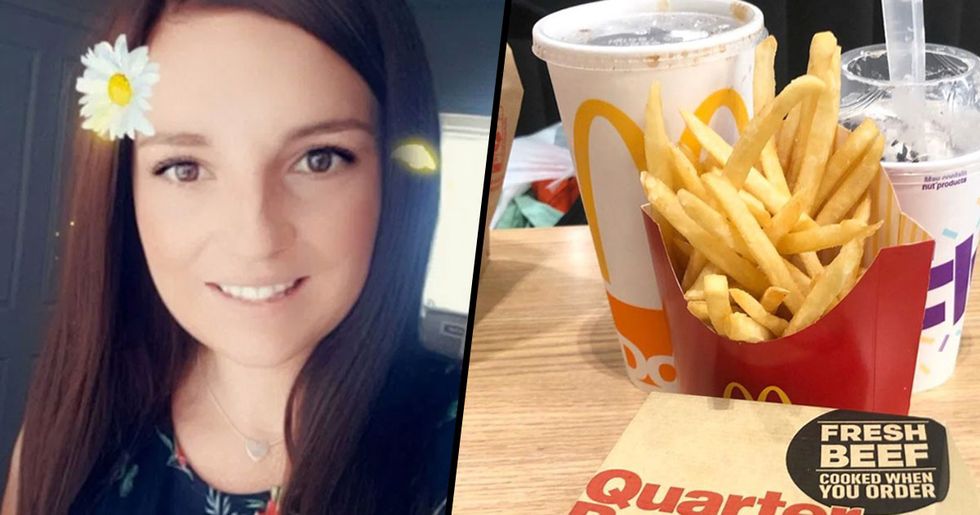 It's super important to ensure that we are eating plenty of fresh fruit and vegetables on a daily basis.

Our diets don't necessarily have to consist of just fruit and vegetables, but eating at least a couple of portions a day can boost our health and wellbeing massively.

But there are many individuals out there who simply detest the tastes, smells, and textures of healthy food and simply cannot bring themselves to eat even one tiny piece of fruit per day.

One woman from the U.K hasn't eaten any fruit or vegetables at all in the last twenty-two-years, and, amazingly, she's still alive.

Keep scrolling to learn about this bizarre lifestyle...

It doesn't take a genius to realize that fruit and vegetables are very important for our health.

These food groups contribute a host of beneficial nutrients, vitamins, and other components that are vital towards keeping our bodies nourished and healthy.

Although fruit and vegetables can be replaced with supplements...

No dietary supplement can serve as a substitute for all of the compounds found in fruit and vegetables, nor can they mimic the potential nutritional interactions found in these foods that may contribute to their healthful effects.

So when a person doesn't intake any fruit or veg at all...

The consequences can be pretty dangerous.

Fruit and vegetables provide the majority of our vital vitamins and minerals...

And, without these vitamins and minerals, functions such as skeletal development, vision, energy, the immune system, and cardiovascular health can be severely affected.

Avoiding fruit and veg is also bad for digestion...

They contain a type of indigestible carbohydrate called fiber which strongly contributes to intestinal health. Without fiber, a person can suffer from severe constipation and hemorrhoids which isn't pleasant at all.

Now, these are only a handful of health problems that come from not eating enough fruit and veg.

The list of health issues is endless, yet there is one woman from the U.K. who hasn't touched a single piece of fruit or veg in the last twenty-two years.

Her severe lack of nutrition comes from a phobia...

The woman is called Jade Youngman and she is from Norwich in the U.K. She is twenty-five-years-old and she claims that she hasn't eaten a single piece or portion of fruit and veg in the last twenty-two-years due to a "phobia of healthy food."

She has attempted to battle her phobia...

Jade, who works as a recruitment consultant, has undergone cognitive-behavioral therapy (CBT) and hypnotherapy to try and fix her avoidant restrictive food intake disorder (ARFID), but nothing has yet succeeded.

She physically can't bring herself to eat anything that's fruit or vegetables...

Speaking in an interview with LadBible, Jade said: "The way I describe how I feel is that if someone puts a plate of fruit or vegetables in front of me, it's the equivalent of putting a plate of dog poo down and saying, 'eat that.'"

Her complex has gotten so severe that she is physically sick at the sight of any form of healthy food.

This isn't a case of the young woman simply being fussy with food...

"It's like a physical reaction. If I put it to my mouth with my left hand, my right hand will pull my left hand away before it gets there," she explained.
"I know that it won't kill me if I eat it and I know that it will probably taste nice, but I can't get it in my mouth."

Apparently, she would happily eat anything until the age of 3...

She suddenly began to refuse foods as a toddler, but it is still unknown by herself and her family as to what triggered it. Doctors initially thought that she was just a toddler who was a fussy eater and they predicted that she would just grow out of it like a lot of young children, but twenty-two-years later... nothing.

"My mum said she can't think of anything that triggered it," she recalled. "There were no incidents of choking or anything like that."

It's the textures of fruit and vegetables that she can't deal with...

"The texture is a defining thing for me. It's not so much flavor. For example, I like the flavoring of fajita seasoning, but I could never eat peppers or chili because of the texture," she explained.

"My tastebuds are quite strong and I end up putting a lot of salt on my food, but it's overcoming that texture that I can't manage. I can't get the food into my mouth. Even if I think I might like the flavor, my head won't allow me to eat it."

It has to be said that her diet is incredibly poor...

"I've always just eaten chicken nuggets, pizza, plain pasta with cheese and fries - processed food, basically," she explained when asked about her actual diet.
"I don't eat breakfast and for lunch, I will have a slice of pizza from bakeries with just cheese on it. Then for tea it will be chicken nuggets, chips or pasta. These are what I call 'safe foods'. I will never eat anything new or that I've not tried before."

ARFID is an umbrella term for conditions in which sufferers have an extremely restricted diet due to the avoidance of certain foods. The most common reason is extreme sensitivity to aspects such as taste, smell, texture, or appearance.

Jade discussed how difficult it is to live with the condition...

She deals with a high number of people who claim that she's "making it up" and that she's simply just being over-dramatic. "People do not believe you," she said. "They just put stuff in front of you and say, 'Why don't you just try it? You will like it.' But I know it will make me sick."

She has a genuine concern for her health...

Jade is worried that she will go blind after reading about a teenager who lost his vision and most of his hearing after living off a diet of nothing but fries, sausages, and fries. "I have not lost my sight but his background is very similar to mine, so I do really worry about it," she said.
"People have used him as an example, telling me I need to change. But I can't just change the way I eat, no matter how much I want to."

Jade is desperate for help...

"I know it is impacting on my health. I am constantly tired - I can sleep for England. I find life really hard on a day-to-day basis and end up relying on caffeine, which I know is also not good for me," she went on to say. "I feel helpless, like I can't do anything about it. It makes me really unhappy. I would do anything for someone to fix me. I just want to find someone that will help me." To learn more about the teenager who lost his vision and hearing due to his diet, keep scrolling...