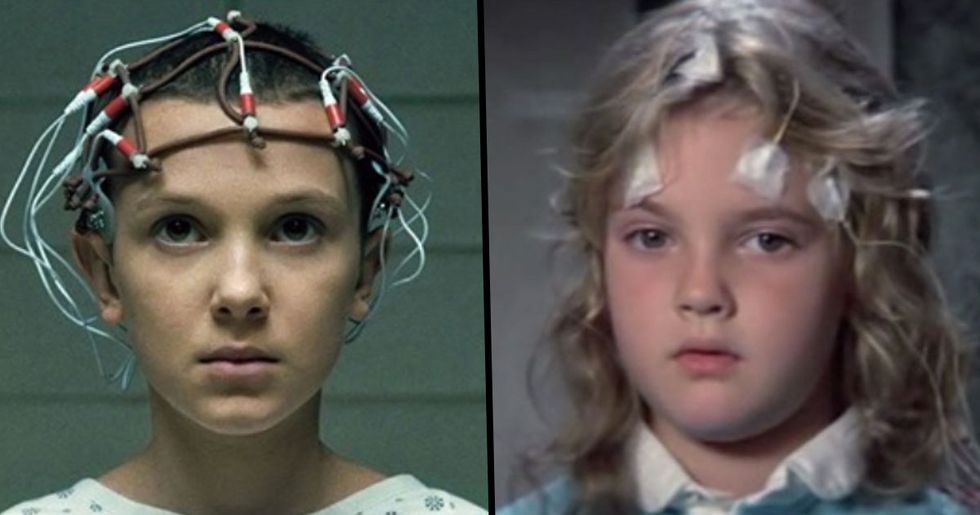 27 Insane Movies All 'Stranger Things' Fans Have to Watch

Since the first season of Stranger Things hit our screens all the way back in 2016, we've been hooked. Season 3 has recently been released and it seems to be all anyone's talking about. And if you aren't, why not?

If you've already managed to binge watch the entire season, then don't fret. I've got a little something for you while you wait for the next season to be released. Here's a list of the essential movies that you have to watch if you're a dedicated fan of Stranger Things. Keep a tally of how many you've already seen!

I'm sure that you've heard of this classic, right? The world of horror wouldn't exist as it does without The Exorcist.

Will’s possession painted quite a realistic picture of a scene reminiscent of The Exorcist.

So give it a watch if you want to see some horrifying scenes similar to the one in Stranger Things.

Steven Spielberg's first ever blockbuster hit took the world of film by storm. The movie tells the story of how a local sheriff teams up with a marine biologist and an old seafarer to hunt down a great white shark.

And, apparently, "The Demogorgon" was based on the giant shark in Jaws.

With all those "teeth," I can see the resemblance...

A group of people in San Fransisco find that the whole of the human race is being replaced by clones that are devoid of emotion.

The Duffer Brothers, who created the Stranger Things series, said that this film was an important inspiration.

So give it a watch and see if you can detect any connections between the two.

This Oscar-winning film tells the story of Roy Neary, an electric lineman, whose life turns upside down after an accidental encounter with a UFO.

The Stranger Things scene in which Will sees the "Mind Flayer" replicated this shot.

The "Mind Flayer" is a massively powerful being that wreaks havoc as the main antagonist of the series. Check out the film to see how the scenes compare.

Based on the Stephen King novel, The Shining, is about a father who is forced into violence by a sinister force. His son is able to see horrifying things in the past and the future, which affects current events.

The father in The Shining provided inspiration for, bad boy, Billy Hargrove.

Billy was doing fine until the "Mind Flayer" used him as a host and possessed his body. See the similarities? If you haven't seen it already, The Shining is well worth the watch.

A classic watch for all you Stranger Things fans out there. This particular movie focuses on Luke's Jedi training with Yoda and, of course, Darth Vader is still on his quest to capture him.

In season 2, Kali Prasad helped Eleven to learn how to control her powers and this scene is almost identical to the one that you'll see in Star Wars.

This one's an emotional one, guys, so prepare the tissues. A friendly "alien" accidentally lands on planet Earth and a child finds the courage to help it to get back home against all odds.

This film was also directed by Steven Spielberg...

I mean, if you've not already watched this one, where have you been? E.T. also has a sci-fi element to it that makes it a great watch if you're a Stranger Things fanatic.

Be warned. This film contains some pretty gruesome scenes. Well, gruesome for 1982. It takes us on an adventure in Antarctica, where a crew discovers that a whole camp has been killed. Whoever or whatever has murdered them is nowhere to be seen. Or is it?

The Duffer Brothers constantly refer to John Carpenter, who directed The Thing.

They let fans know that he is an inspiration, plus, apparently, one of the brothers has a poster of this particular film on the wall of his bedroom...

Imagine if your home was haunted by, not one, not two, but a whole bunch of ghosts. That's basically what this film is about.

Steven Spielberg co-wrote the screenplay for the film which influenced the visuals in Stranger Things.

The aesthetics in the Netflix series are amazing and really make it worth the watch.

Pretty self-explanatory. A couple participate in an experiment which results in them gaining abilities such as pyrokinesis.

Drew Barrymore, who plays the "firestarter," Charlie, has similar qualities to Eleven.

So if you like Eleven's character, you'll love Charlie.

You've probably referred to naughty children as "Gremlins," right? Or is that just me? Well, regardless, this is where it comes from! A young boy breaks 3 important rules and ends up unleashing a bunch of horrid little monsters on the town.

Dustin’s pet, "Dart," on Stranger Things 2 was inspired by "Gizmo."

The "little monster" theme runs through both of these!

Indiana Jones is set in India, where a village of people ask him to find a stone that's supposed to save their village. However, after he agrees to help them, he finds that a secret cult is plotting a disturbing plan...

All of the Indiana Jones movies were crucial in influencing Stranger Things.

So if you want to see some good ol' action, I highly suggest you watch this classic.

The title pretty much sums up the film. A bunch of guys go ghost-hunting, basically.

The guys in Stranger Things dressed as the Ghostbusters for Halloween.

That's pretty much it, but the film is worth watching! It's iconic!

A bunch of kids band together in a secret mission. Sound familiar?

Sean Astin starred in The Goonies and in Stranger Things 2.

Fresh out of college, this group struggle with "adult" life.

I bet you're wondering: "What's this got to do with Stranger Things?"

When this group of young boys find out about the death of a young boy near their homes, they go on a journey to find the body.

This film is heavily based on friendship and discovery, which forms the foundation of Stranger Things.

So, if you want to watch a good ol' wholesome movie, give Stand By Me a watch.

The version that you've all probably watched is the 2017 remake, right? So, now it's time to give the original It a go! Your fear of clowns is about to be taken to the next level... A bunch of kids rally together to stop a horrid clown from hunting children.

Throughout Stranger Things, the gang fight various monsters. Those scenes were greatly influenced by It.

When industrial sabotage occurs at a wildlife park, dinosaurs are released and wreak havoc in the area.

Remember the fights with the Demogorgon in Stranger Things?

Those were heavily based on the terrifying scenes from this particular film.

Marty McFly, a high school student, is accidentally sent thirty years into the past by his friend who is a scientist.

This film is actually featured in season 3!

Stranger Things is filled with Back to the Future references! For example, Max is riding the same brand skateboard as Marty McFly.

A group of military officers and scientists decide to stay in an underground bunker as the world above is overrun by zombies. A classic plotline.

This movie is one of our personal favorites!

So, if you enjoyed Stranger Things, you'll definitely enjoy this!

A boy finds a mysterious book that takes him into a whole new world of adventures.

Dustin and Suzie sing the title song from this fantasy film in season 3.

The scene will give you full-on '80s nostalgia!

Arnold Schwarzenegger plays an assassin known as the Terminator who travels from 2029 to 1984 to kill Sarah Connor.

This movie is actually iconic, so I had to get it in there...

Admittedly, there are no robots in Stranger Things, but both flicks follow an epic quest to save the world from alien entities.

An officer tries to save his wife and a bunch of other people who have been taken hostage by German terrorists in LA.

There are plenty of action scenes in Stranger Things.

Which resemble scenes in Die Hard, especially the ones involving the air ducts.

This one is also about a group of friends who are just enjoying life together. Definitely a feel-good film with friendship at its heart.

And, as you know, the gang in Stranger Things are the ultimate group of besties.

So give it a watch, I'm sure you'll enjoy this teen-classic!

According to IMDb, this movie is situated at "the dawn of World War III. In mid-western America, a group of teenagers band together to defend their town, and their country, from invading Soviet forces."

A classic film that provided great inspiration for the action scenes in Stranger Things.

At the end of season 2, when Eleven is closing the gate with her powers, you get a true feeling of intensity as well as drama. Will she manage to close it? Spoiler alert: She does!

After landing their spaceship down on the moon, the crew realize that someone has been attacked by a mysterious being, and it only gets worse for them as the movie goes on...

This sci-fi/horror classic is a must-watch for Stranger Things fans.

I promise, it's a different movie! According to IMDb, this film is set fifty-seven years later. "Ellen Ripley is rescued by a deep salvage team during her hypersleep. The moon from the original movie has been colonized, but contact is lost. This time, colonial marines have impressive firepower, but will that be enough?"

Paul Reiser was in this sequel to Alien and Stranger Things 2.

And if you made it to the bottom of this list, congratulations!

I hope you have fun watching these movie classics!