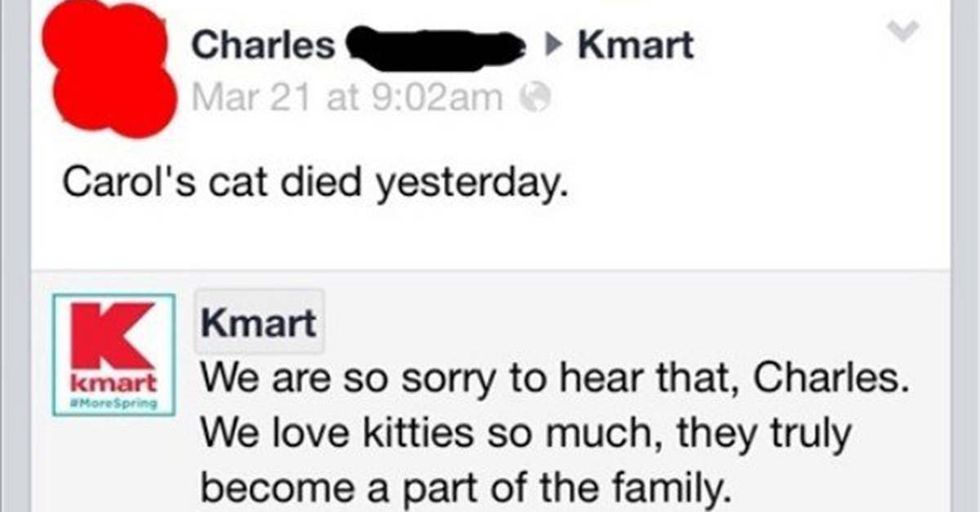 First off, the fact that the older generation has been able to keep up with constantly changing technology is impressive all by itself.

But, as we know dealing with people who are new to Facebook or email or texting, the way they interact can be a little hard to adjust to. Often it will be a simple little observation like their posts are too polite. Or too direct. Or they'll address a company like a person. It takes some getting used to for all of us, so when we enjoy a laugh at these slightly-off Facebook posts, we're not doing it to be mean. We're doing it because the posts are REALLY funny.

Robb sorted it out. But thank for the response, Walmart.

"Don't you dare condescend to me, Walmart."

Chip's willing to walk everyone through the joke, which is adorable.

You can tell this is a proud grandparent.

You're out of second chances, Green Giant.

"Now tell me something about your life..."

I think someone's still fumbling through the menu function on IHOP's site.

You can tell this is a person who was raised right.

I think Vincent might be the grim reaper of pets.

Their Facebook ordering system seems to be screwed up...

What was it Woody Allen said about people not wanting to join any club that would have themselves as a member?

The only rating higher would be...zero stars.

"I'll wait until you confirm it's done."

"Jean, could we have a word outside? Privately?"

Those are the only two possible outcomes. Work at Walmart or DIE.

Amanda's got your back.

Red Lobster was an orphan. Not cool, Dennis.

Damn, Daniel! Back at it again!

I bet Tyson's wife was the one who liked that comment. She's the worst.

You weren't there when she needed you most, Dollar Tree. You have to live with this, not me.

They're gonna be so stoked when they learn YouTube is free.

That might be the sweetest thing I've ever seen.

She's better off having missed out on dabbing, I promise.