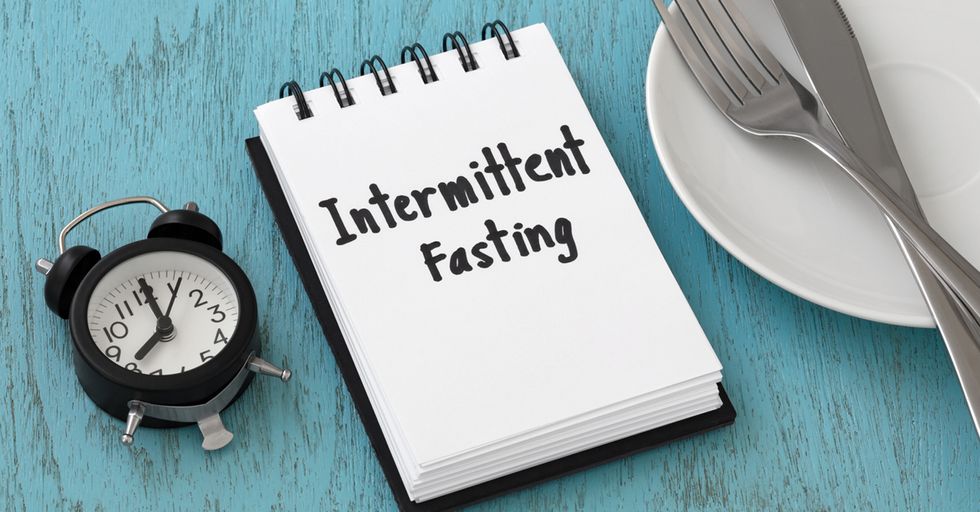 Homo sapiens. Hairless (more-or-less) apes. Big-brained bipeds. Call us what you will, but we humans are motivated by few things more than the four omnipotent “f-words”: fighting, fleeing, fornicating, and feeding.

Today, we're going to focus on feeding, or in this case, the lack thereof. The diet industry grossed nearly $70 billion in 2017, bombarding consumers with a bevy of promises that for the vast majority, go unfulfilled. Yet, nearly everyone who utters that well-worn phrase “I’m on a diet” has a practical religious devotion to their weight-loss commandments, to their plan. The end result? A dizzying number of Pinterest boards, podcast downloads, book purchases, and supplement subscriptions.

But recent research suggests that we may have been overcomplicating the issue all along. Alas, a fifth “f-word” has been thrown into the equation: fasting. It may sound like a diabolical and depraved delusion, but the evidence here is compelling. Let’s explore what fasting may have to offer, for our waistlines and beyond.

To fast is to abstain from eating or drinking for a designated period of time. Historically it has been used for religious observance, but its recent renaissance is due to its potential as a powerful health intervention.

What Happens to Your Body During a Fast?

Fasting for at least 12 hours triggers autophagy, a term meaning “self-eating" in Latin.  This biological process permits the cell to regularly perform a “deep clean" of itself, recycling and clearing any damaged proteins, viruses, and bacteria.

Why Autophagy is so Important

Typically our cells are busy processing fuel for energy, meaning the body is in an anabolic state. However, autophagy encourages a catabolic state, preventing undue cellular buildup and damage.

Autophagy is creating such a buzz that in 2016, the Nobel Prize for science was awarded to Dr. Yoshinori Ohsumi for unraveling its cellular mechanisms in humans. Ohsumi identified at least 15 genes linked to autophagy that if mutated, could lead to a cell’s premature death. Since his seminal work, the field has exploded, seeing a ten-fold increase in the number of papers published.

The Benefits of Fasting

Now that we know what makes fasting so beneficial, let’s examine its potential as a health intervention for a wide range of conditions.

Several studies demonstrate that subjects who were put on a fasting protocol experienced significant reductions in their blood sugar levels. This may come as no surprise, as eating food generally equates to higher blood sugar. But its impact is stunning.

When you eat, your pancreas releases your body’s main energy storage hormone, insulin. This allows our cells to use and make energy and without insulin, we die. Yet, it is possible to have too much of a good thing! Long term overeating can cause insulin resistance, permitting glucose to build up in the bloodstream and damage cells. Fasting drops glucose levels and in effect, resensitizes the body to insulin.

Chronic inflammation can kick-start a host of unsavory effects and is thought to be the seed of many conditions, such as autoimmune disease and even certain types of cancer. Although further study is required, the anti-inflammatory effect of fasting is likely is related to autophagy.

Most of the research on this front is focused on animal studies because to truly determine the effects of fasting on the human brain, we would have to kill the study subject and perform an autopsy… Something tells me enrollment wouldn’t be high. Yet, evidence in rat studies shows improvements in both brain function and structure.

Those diagnosed with a neurodegenerative disease such as Parkinson’s or Alzheimer’s will often die from the condition, as research directed at curing them has mired. As a result, defense is the best offense and fasting may prove powerfully beneficial to this strategy.

Research on fasting and tumor growth has largely been restricted to animal and test tube studies, but the results have been impressive! One study found that fasting stymied tumor growth in rats, whereas another found the effects of starving tumor cells to be as effective as chemotherapy. Perhaps then, fasting may change the future landscape of care for cancer patients!

Perhaps unsurprisingly, rat studies have shown a major decrease in the aging process of those who were put on a fasting regimen compared to those who were spared the scientists’ sadism. The best part of using a fasting diet to prevent aging? It’s far cheaper than that botox you were considering.

And Of Course, Weight Loss!

Unsurprisingly, abstaining from calories for an extended period of time may contribute to weight loss (as long as you don’t binge during your time off!). An important line to draw between fasting diets and overall calorie restriction is the long term effects the two methods have on metabolism. Whereas reducing daily caloric intake to achieve weight loss may result in lowering your metabolism, fasting has the potential to actually improve it by temporarily boosting levels of norepinephrine, a neurotransmitter involved in the body’s sympathetic response.

Have I Peaked Your Interest?

Fasting is no doubt a trying experience but if you’ve read this far, I’d venture to guess you're willing to give it a go! Let’s take a look at how you can tailor this health strategy to fit your lifestyle.

Choosing the Type of Fast For You

“Fasting" is a catch-all term, but depending on its context can have very different definitions. Moreover, each type of fast portends different benefits so it’s important to know what your objective is when fasting.

The least intensive form of fasting is time-restricted feeding, which requires an individual to eat all of their day’s calories in an 8 to 12-hour window. Although it takes a bit of planning, many find sticking to this protocol to be very feasible, making it a potentially good place to begin if you’re intrigued by the trend.

This type of fast requires a bit more willpower, asking individuals to intake anywhere from 0 to 25 percent of their daily caloric intake for 24 to 36 hours. That said, this type of fast also provides additional advantages, such as revved up autophagy and greater potential for weight loss.

How to Enter an Intermittent Fast

The last meal you eat before your fast is an important factor for your long term success. Avoid binging or eating large meals, as this tends to fluctuate glucose levels and stretch your stomach, making it that much more difficult to fast. Instead, prepare yourself a smaller meal that is rich in healthy fats and proteins.

How to Break an Intermittent Fast

Properly breaking a fast is also important. The stomach shrinks considerably during a fast so shoveling in a lot of food can cause serious gastrointestinal discomfort. Additionally, because glucose levels tend to drop dramatically during a fast, suddenly raising them can sabotage any long term health benefits. Ease into your regular eating habits again with a small, low carbohydrate meal.

How Often Should I do an Intermittent Fast?

Some practitioners recommend a 5:2 intermittent fast, where 5 days a week are spent eating normally and 2 non-consecutive days are spent fasting. Others ramp it up a notch and complete alternate day fasting, or a 4:3 protocol. Either way, it's critical you don't binge eat on your non-restricted days.

Though nearly everyone can practice a time-restricted feeding schedule, an intermittent fast is not a “one size fits all" approach. Lifestyle factors like stress, exercise, and even whether you’re male or female impacts your ability to see its benefits.

Your overall stress levels matter when fasting because fasting is in itself, a form of stress. This is not a bad thing, because acute stress (like a one day fast) actually makes your body stronger. However, if you couple that acute stress with a chronically stressful lifestyle, this may tip the scales into unfavorable territory. If you identify with this challenge, consider practicing time-restricted eating instead. There’s no shame in listening to your body.

Most people don’t exercise often enough to prevent them from successfully doing an intermittent fast. That said, if you have a physically demanding job or if you’re training for a marathon, it may not be wise to deprive yourself of calories for an entire day. Why? Again, it comes down to stress. Exercise is yet another form of stress and if you’re continually active, straining your body further by fasting may cause it to go into overdrive!

Unfortunately, intermittent fasting can put women in the classic weight loss catch-22 – although we are socially expected to maintain a super slim physique, our evolution wants us to be slightly on the softer side. The topic is underexplored, but it’s possible that a woman’s hormones are more subject to fluctuation than a man’s when fasting. Again, it may be wise to abstain from whole day fasts in this case or to modify the classic 5:2 protocol to a 6:1.

By now, you see that there are many caveats to skipping calories for an entire day or more. Although every individual is unique, a few more populations that may want to avoid this approach are those with a history of eating disorders, those who are prone to hypoglycemia, women who are pregnant or trying to conceive, and people who are either underweight or malnourished.

The water fast is exactly as advertised: 24 to 72 hours of consuming only water. Some daring individuals extend this window into 5 days, but this should not be attempted without medical supervision.

Benefits of a Water Fast

The benefits of a water fast parallel those seen on less intensive protocols, just the added time spent on the fast has the potential to maximize its effects. It’s important that you enter and exit the fast properly however, to avoid negative reactions like stomach distension or worse, refeeding syndrome.

Consider entering and breaking a water fast similarly to an intermittent fast, though due to its added extremity, exercising more caution is a good idea. Extended water fast (24+ hours) should also not be practiced on a weekly basis! Speak to a medical professional on how to safely incorporate this strategy.

A time-restricted eating schedule appears to be beneficial for most everyone (shocker, we’re not grazing animals!). Practicing an intermittent fast or a more intensive water fast may raise this bar, though there are factors unique to every individual that should be considered.