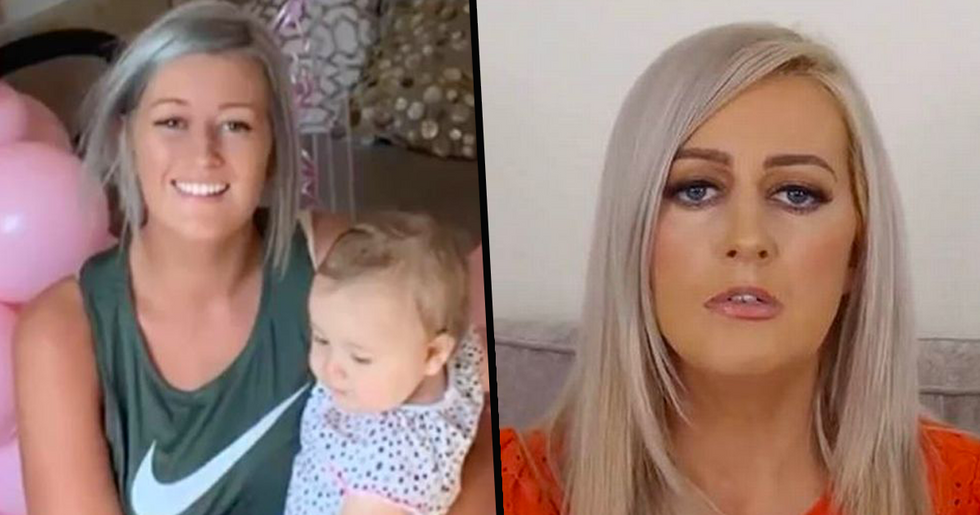 One thing you never expect to have to do is say goodbye to your children, knowing you'll never get to see them grow up.

But when you've been diagnosed with a terminal illness, it's just one of many struggles you have to face.

Saying goodbye to your children is never easy.

But when that goodbye means forever, it really is unbearable.

A young mum diagnosed with motor neurone disease has had to say goodbye to her two children after moving into a hospice to live out her "final chapter."

But some people do defy doctors' prognosis and live with it for many years.

The symptoms always get worse over time.

There is no cure for motor neurone disease and no treatment will significantly alter its course.

Once you've been diagnosed, the medication is purely there to give you a better quality of life until the end.

The single mum vowed to fight the condition from the beginning for her two little girls, Georgia, 9, and Kacey, 1.

She defied doctors by graduating from university and being here to celebrate Kacey’s first birthday.

Her decision to move onto the "final chapter" of her life didn’t come easy, but Jennifer said she is keen to shield her children from "as much heartache as possible".

Jennifer has now said goodbye to her little ones and has moved into a Marie Curie Hospice in Glasgow to live out the rest of her days in as much comfort as possible.

She made it clear that "Life is quality over quantity now."

"I’ve organized everything - memory boxes, wedding presents, 18th and 21st birthday presents, gifts for my first grandchildren and even sorted my funeral arrangements to protect my family. I want to keep them away from as much heartache as possible."

Her symptoms have left her unable to speak, swallow water, or eat food without choking.

All she wants now, is to protect the memory her children will have of her.

On top of this, the pandemic has left her feeling exhausted and alone.

Jennifer said: "I miss being able to phone my friends and have a conversation, I can’t put my hair in a bobble."

She was seven months pregnant when she began experiencing slurred speech but she put it down to the stress of being pregnant.

After she gave birth to Kacey, Jennifer visited a doctor who told her the slurred speech was down to hormones following pregnancy and asked her to return in eight weeks.

On March 26, 2019, doctors told Jennifer she had motor neurone disease and was given just 9 months to live.

She said: "I’m trying to spread awareness about my story so that other children won’t be left without a mum because of this horrible disease. There needs to be more education on MND."

She feels there isn't enough awareness about the disease.

"I hope there will be more time and money put into research so we can move forward to one day find a cure. There is so much information about cancer yet people don’t know much about MND or that there is no cure. Being diagnosed teaches you to be strong and cherish every day with the people who truly love you."

Jennifer announced in an open letter to her friends and followers that she had decided to begin her "final chapter" at the hospice.

She said: “After a long 24 months of fighting MND I have today began my final chapter in Marie Curie."

She gave an emotional speech...

She wants her girls to remember their mom for who she was and not the disease.

“Thank you to everyone I’ve met throughout my journey, to the people who stood by me through everything not just this disease but everything in my personal life and for everyone who never doubted me. The kindness and love my family, me and my girls have been shown, shows that there is still good in this world. My families' and friends hearts are breaking, mine is shattered leaving behind my two little girls, but I know what I’ve left behind for them will show how much I loved them and they’ll carry that in their hearts forever."

Understandably, she can't always put on a brave face.

“MND is the cruelest disease and everyone has an acceptance of what quality of life is for them. Mine has been taken from me. I don’t know where I am going but I know there will be people waiting for me. I’d be lying if I said I wasn’t at all scared because I’m human and at 29 it is scary."

Jennifer's goal from the start has been to get the most out of her time with her children.

“I said from the day I was diagnosed I’ll know when I’m ready and that time has come. Me and my girls have made more memories in a year than some will make in a life time. For that I am blessed"

She has raised a considerable amount for the charity over the last few years and wants people to help as much or as little as they can.

“Motor neurone disease is so underfunded and if I could ask anyone to pick a charity to give people diagnosed a chance, at least a glimmer of hope, then please donate to MND Scotland. "Say a wee prayer for my girls, my dad, mum, and the rest of my family and friends and send them the strength to get through this. "I’m not doing goodbyes. I’ll see you in a while."

Her words have touched thousands that showed their support since her journey began.

If you're in need of something a little more uplifting, keep scrolling to find out what one 10-year-old made so she could safely hug her grandparents during the pandemic...