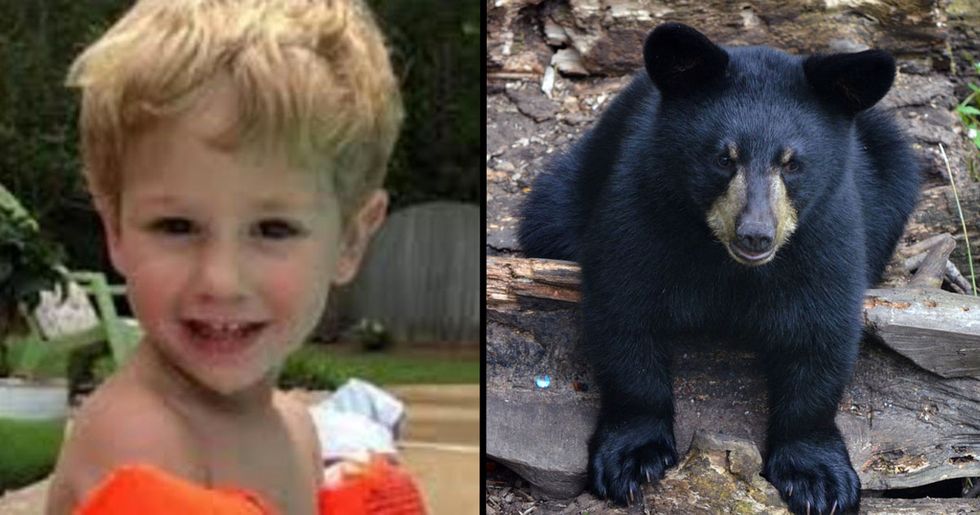 Our world is full of miracles – things that us nor anyone else can explain, and yet they exist. Often these miracles can pertain to the natural world and to the animal life that exists upon our small, yet beautiful planet. For example, we have all heard the story of the man raised by wolves, but over the decades since we have heard of humans being saved by whales, being rescued by household cats and even being raised by ostriches. All interesting and mind-blowing interactions that have left some zoologists stumped at how a human can form such a bond with a wild animal. Well recently the same magical occurrence took place when a 3-year-old boy went missing in a forest and was inadvertently looked after by a bear.

His name is Casey Hathaway.

Only last week, Casey Hathaway, went missing in the woods of North Carolina.

The 3-year-old disappeared into the feral landscape without a trace.

Of course his family began their search immediately.

And got all the help they could.

The family also enlisted the help of the local police to find their missing loved one.

Even with the help of the police, Casey was not discovered until two days later.

But he was unharmed.

Craven County Sheriff Chip Hughes, spoke out about the incident.

Giving us all kinds of information.

When talking about the search, Sheriff Hughes stated that they found Casey about 40-50 yards into the forest.

His crying had helped.

Hughes even stated that it was reports of hearing a child crying that prompted them to search that specific area.

They found him in good health.

Although Casey had been subjected to the forest and its elements for two days, he was found in good condition.

He had been kept warm.

He was found a little lethargic but warm, according to what the Sheriff had to say.

Of course his rescuers wondered how he faired so well.

A 3-year-old on his own in the forest doesn’t exactly make him Bear Grylls.

But a bear was involved.

According to Sheriff Hughes, Casey spoke about his time in the forest.

And he said something amazing.

According to Casey, he was found and cared for by a bear living in the forest.

Yes, there are. Well, there’s once species living there.

And it’s called the Black Bear.

And it remains to be the only species known to live in that particular region of North America.

And there’s more to learn about them.

According to the North Carolina Wildlife Resources Commission, black bears live on a diet of berries, nuts and small animals.

And there’s one more thing.

Black bears actually aren’t known to attack humans, with reports on such instances being decidedly lower than other species of bear.

So maybe Casey was telling the truth.

It’s not my place to question the word of a 3-year-old, except it totally is. But even if it was real or not, the news has sent people bear crazy.

With many people sending teddy bears to Casey.

Upon hearing that Casey was found safe and sound, many followers of his story have started sending him and his family teddy bears.

A symbol of the animal who protected him.

What a wonderful gesture.

But what made the bear do this?

This is obviously another miracle in our world. And some have seen it that way.

Breanna Hathaway, Casey’s aunt, wrote about her response to the bear story on her Facebook page.

And she had something to say.

According to This is Insider News, Breanna Hathway wrote the following statement on the social media platform: “He said he hung out with a bear for two days. God sent him a friend to keep him safe. God is good God. Miracles do happen."

Is it a miracle? Who knows?

I cannot confirm this instance as a God-given miracle. But it surely is an amazing and mind-altering story.

But again, who knows how real the bear was.

Casey was alone and scared after all. And I'm sure many of us would like to make friends with a bear. The yellow, animated kind.

That little Casey Hathaway is a true survivor.

As his family stated only the other day, “Casey is in hospital, eating Cheetos, nuggets, and watching ‘PAW Patrol.’"

Which he completely deserves.

For being such a brave little boy.

I'm sure we can all rest knowing he is safe.

And that he may not have been entirely alone out there in the wild.

Maybe this bear will be found or heard of soon.

Just to see if he actually exists.