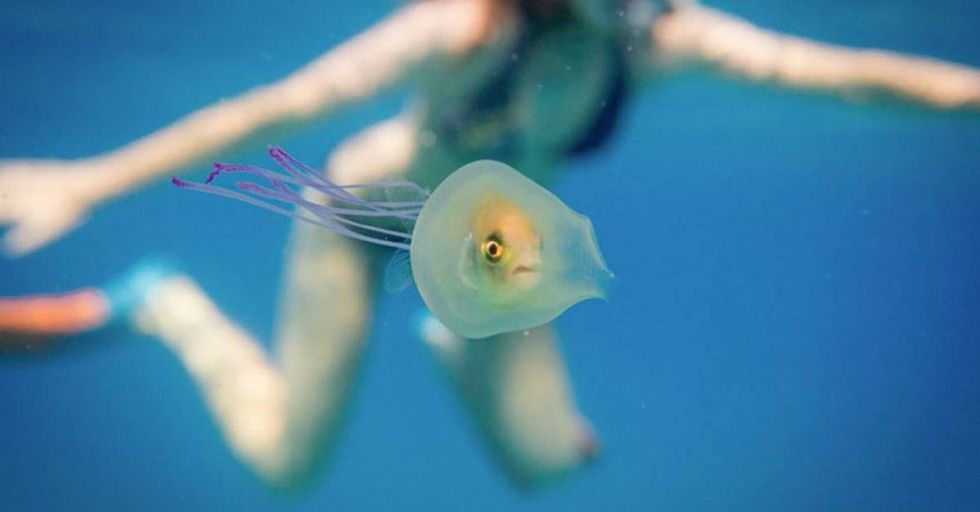 30 Awe-Inspiring Photos You Won't Believe Are Not Photoshopped

These incredible photos aren't Photoshopped, which means the world is actually insane because these pictures are crazy, awe-inspiring, jaw-dropping, eye-widening, and in all other ways hyphenating.

You might want to put a pillow on the floor because your jaw is about to drop.

A Tale of Two Cities

Man, New York is the best. Those t-shirts are right. I do heart NY!

This may look like a starry night sky, but it's actually a puddle with flecks of gravel in it. How cool is that?

This hotel in the Netherlands looks like it's straight out of a Wes Anderson movie. More like The Grand Amsterdam Hotel!

Welcome to the hit new game show, Bird or Broken Glass! If you guessed bird, you'd be wrong. It's a chip in a windshield.

The spirit of the great peacock watches over and protects you. Or it's just a white bird that pounces on you and scares you.

The Tree Is Lava

This is the most Lord of the Rings-y, Game of Thrones-y picture that's ever been taken. I feel like I should kneel in the presence of this clearly magical tree.

Timing is everything. That's why I wear a watch.

This is simultaneously so disgusting and so satisfying. How does a building get that dirty? And where does the dirt go when they wash it off?

It took me legit 30 seconds to realize what was happening in this photo, but once you see it, it makes total sense. Go ahead, stare.

Again, it's like Wes Anderson designed this whimsical world in which boats float through the sky. It's amazing what effect a change in perspective can have on perception.

This brilliant yellow tree is 1,400 years old! Man, I hope I'm that vibrant when I'm over a thousand. Something tells me I totally will be.

Talk about a drop in the bucket! This is a perfect drop of dark green paint in a bucket of light green paint and if you look at it for too long your brain will explode.

A row of neatly lined up wind turbines or one crazyyyyyy wind turbine? Fiiiiine, it's the first one.

One Of These Things

This would be great as the image for one of those motivational posters about how you should be different and stand out. Yeah, someone should make that.

This is either an innocent train station at night or the poster for the Danish horror movie, Dødstog.* *Danish for Train of Death** **according to Google translate

This photo is much grimmer if you see the planes in the rain drops as crosses in the eyes of dead frogs. Definitely don't picture that, it'll ruin the photo for you.

Lava is so cool. I mean hot. It's really hot.

The resemblance is uncanny. The Force is definitely with this snowflake.

Speaking of halfsies, this worked out perfectly. And by that I mean this person ended up with two adorable dogs, which can only be the result of some great life decisions.

I want to be friends with sand bear. But I also feel like sand bear would barrel into me and I'd get a lot of tiny rocks in my eyes.

No, it's not a secret space pirate ship floating through the air. It's the top of a tower obscured by clouds.

If this isn't a still from the latest Stephen King television adaptation, then I don't know what it is. That's what it looks like, right?

This looks like a lava waterfall, which would be awesome in its own right, but it's not. It's actually a ray of sunlight poking through a crack in the rock.

This is what happens when there's a flood, it snows and freezes, and then the water washes away. Spooky, haunting, and super cool.

It's a fish. In a jellyfish. A FISH. INSIDE A JELLYFISH. That is all.