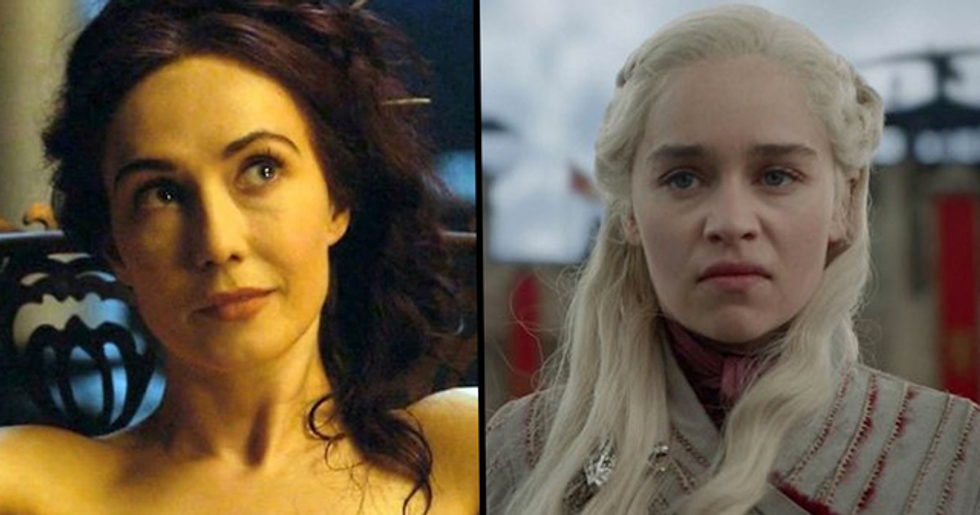 30 of the Biggest Fails on 'Game of Thrones'

The final series of the most epic show that our TV screens have ever seen has just come to an end. Game of Thrones has averaged over 44 million viewers per episode and it has without a doubt been one of the most visually stunning shows ever made. And it should be; each episode cost at least $15 million each!

Yet despite the enormous budget, this final series was the culmination of a decade of questions for viewers, and it was always going to be impossible to please everyone. As a result, the final series has come under immense scrutiny. From leaving modern-day props on set to suggesting that Danaerys just forgot about the iron fleet, there have been a number of fails in this final season.

Luckily for you, we have culminated the best fails and memes all into one article. You're welcome.

People have been pretty scathing about the final season.

These memes all began when David Benioff and DB Weiss said that "Dany kind of forgot about the iron fleet." For the viewers, that opened the doors to all sorts of mischievous memes.

What happened to Daenerys when she heard the bells?

It's most likely that Dany realized that she had won, but didn't feel the happiness that a lifetime of struggle was supposed to be worth. This was the culmination of all her efforts, but it wasn't enough. Either that or she just really hated those bells because of what they signified to Cersei…

Jamie had a change of heart.

Jamie had one of the most interesting plot arcs in the series. It seemed like he really was a nice guy, and had done everything for the right reasons. But, ultimately, his incestuous love for his sister was too strong to deny.

Does Sansa know her position?

Sansa was keen to keep the North separate to the rest of the kingdoms, which seems like a great option for her. The only problem is that Bran is also the heir to Winterfell. We're guessing they're going to sort that one out between themselves.

Euron Greyjoy, appearing at the shore at the exact moment that Jamie Lannister was there was a little too convenient. But what was more laughable was that Euron both forgot that he was the only person to have killed a dragon, and also hadn't killed Jamie. Maybe that's sort of the point though. He was deluded and clueless from start to finish.

The horse made for a poignant, but confusing, scene.

Arya approached this horse much in the same way that she had approached Nymeria. But unlike her old wolf, the horse let her approach. Was this because her vendetta was over, or was it just that the writers forgot what was going on? We'll discuss this scene again later in the article. Now, let's take a look at some of the genuine on-screen errors that were unarguably not supposed to happen.

Did you spot the hand?

You would think that a man whose character has only one hand would remember to wear the golden hand for all his scenes. Yet, somehow, he was filmed with a regular hand for much of his last, incredibly emotional, scene. And that's not the only error.

Anyone for a coffee?

The survivors celebrated their victory over the dead and Daenerys started to get a sneaky suspicion that she wasn't going to be loved as she had hoped; there was a lot going on in this scene. Characters were flirting and drinking left, right and center, so it's no wonder that someone forgot to remove a coffee cup… but c'mon guys.

How about a bottle of water?

From the behind-the-scenes pics that we have seen, it looks like it was very hot while the GoT cast were filming this scene. Arya was spotted in sunglasses and Bran and Sansa both got their legs out from under their cloaks. But surely there's no need to keep a water bottle on set with you... Now let's take a look at some of the best memes that sum up some of the most confusing moments in the final season of GoT.

Some moments in episode three were hard to see.

That's an understatement... Watching episode three involved a lot of squinting at the screen to try to work out if the lights had all gone out, if the characters had blue eyes, who it was that was still fighting, and what the hell was going on with the dragons. It was always going to be a dark episode, but, apparently, the issues were worsened by the sheer volume of people trying to watch the same thing at the same time.

The final series had a lot of tying up to do.

It was always going to be difficult to tie up all the loose ends in the final series of GoT. The whole point was that they needed to resolve what was going on with the different plot lines.

There was no need for this.

Some things are just too cliché. And there was no need for Sam to say that the book was called A Song of Ice and Fire. We could have all guessed, rather than gagged. Cringe.

Has anyone kept their HBO subscription?

HBO is a phenomenal TV network. They have had some of the greatest TV shows ever. Beyond GoT, they've also been behind The Sopranos, The Wire, Veep, Sex & the City, True Detective, Boardwalk Empire, Band of Brothers and Big Little Lies. Yet access to all of these shows, including lots of their current shows, hasn't been enough to persuade people to keep their $7 subscription now that GoT is over.

Sam did his best.

As Sam Tarley tried to suggest that democracy could be a good way to determine the new leader of Westeros, the leaders sat back and laughed at the idea. This meme is the perfect depiction of where Sam obviously imagined he was.

Some of the lines didn't quite add up.

With Bran at the head of the kingdom, one of the perks is that he can actually see everything that's going on. It makes you wonder why he would ever need a Master of Whisperers.

Does it matter that Jon was a Targaryen?

If it weren't for Jon being a Targaryen, he would have been able to stay with Daenerys and wouldn’t have been a threat to her crown, so it was pretty important. At the same time, it had been building up as if it would be a much bigger reveal.

Greyworm didn't have a strong grip on authority.

Almost nothing seemed to go Greyworm's way. He didn't get much justice for Jon or Tyrion, even though they were the two to bring about his Queen's demise.

What was the true significance of the horse?

Did the horse represent life and the lord of light to show that she wasn't there to die? Did it demonstrate that although she couldn’t save the child carrying a horse, she could save this horse? Was it showing her that she was allowed to leave and her job here was done? Who knows?

GoT is all about the hidden symbolism.

As Daenerys emerged from her victory, she was wearing black instead of white for the first time. Her hair was almost entirely braided, to depict all the battles that she had won. And then it showed her with dragon wings. Did anyone miss that she had plunged into madness and there was no saving her?

As Drogon burned down the throne, he made it impossible for anyone except his mother to sit on the throne. Was he also making a point about how the throne represented the evil that had consumed Dany, or did he just misunderstand what happened to her?

Where did Jon get banished to?

As Jon was exiled to the Night's Watch, a lot of people watched on with confusion. If the Night King had been defeated, and the wildlings had been accepted into Westeros, what exactly was the point of the Night's Watch? Does this mean that the White Walkers weren't all defeated?

Varys had lost his touch a little by the end.

Throughout the series, Varys had been incredibly secretive. He did what was necessary to both serve the people and survive. But he seemed to forget that somewhat by the end. His final whispering to Jon wasn't very secretive at all.

There was one moment that was unforgivably sloppy.

Who else shuddered when they saw this? It was very sweet that Brienne filled in the book for Jamie, but what was the point if she was then going to close it before it dried, leaving it all to smudge? Or was it the ultimate act of passive aggression?

Can you imagine what Yara must have been thinking when Sansa spoke?

If anyone was going to agree with Bran being the king of the seven kingdoms, you would think it would be his sister. But no, she was unwilling to bend the knee to anyone, even her little brother. Meanwhile Yara had just pledged allegiance. Lol.

Jon must have just wanted to go back up to the watch.

The only person who was really angry about Jon's actions was Greyworm. Everyone else thought that he was the best leader;  he did what was just and necessary, he spoke for the people and was the rightful heir. He must have really meant it when he said that he didn't want it.

Can Bran really see everything?

Bran might know everything that has been, is, and will be, but if no one has ever been west of Westeros, he won't know what lies there. On the other hand, someone must have been. Maybe Arya should just ask Bran and stay with Gendry.

Stories are the most important weapon.

As a shackled Tyrion spoke out to the leaders of Westeros, he posed the question. Who has a better story than Bran? Sure, he's had quite an interesting adventure up in the North, but that's nothing compared to the majority of the characters! Maybe Tyrion should have been a bit clearer about just how much Bran can see.

The Stark children began to show signs of PTSD.

Sansa had been through a hell of a lot by the end, but that still didn't cause as much trauma as being pushed out of a tower, or training to be an assassin. She must have really been wondering about what was going on with her siblings by the end.

Jamie was the ultimate kingslayer.

When Jamie was on a roll, he was really on a roll. He could see that the Starks were going to get in the way of the Lannisters and tried to kill them off, starting with the most important. Either that, or he was just worried about what the world would do when they discovered his incest.

The Starks won the Game of Thrones.

Only two out of six children died, which compared to most other families in Westeros, was a miracle. On top of that, they're in charge of pretty much everywhere. Who can be upset when this is the ultimate outcome? It's the one we had all been rooting for since the beginning and is the best tying up of ends that we could possibly have hoped for. Are you struggling to find something to watch now that our beloved Game of Thrones has finished? We've ranked the best shows on Netflix and you'll be spoiled for choice! Keep reading to find your next watch. Ready? Let's go!