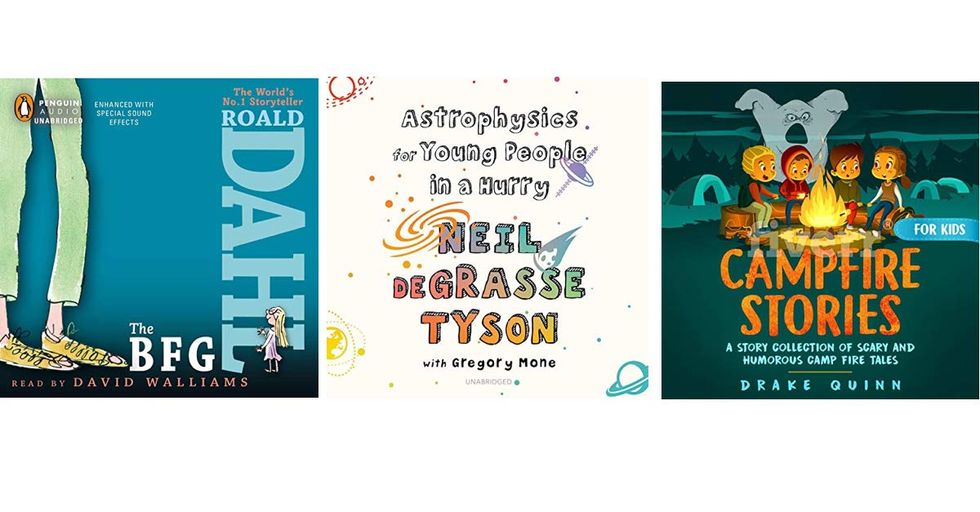 As I shelter at home with three kids, I'm pulling every trick out of my tool chest to keep them happy and busy. In addition to schoolwork, screens, and walks (so many walks...), we're listening to audiobooks. They're an excellent resource for reluctant readers, and even kids who already love to read enjoy listening during art projects, quiet play, or resting.

For little ones, there are 365 stories featuring their favorite Disney characters, as well as campfire stories for kids who like spooky tales. I'll share my tips for encouraging reluctant readers as well as let you in on the unputdownable series recommended by my bookworm teenager.

Now is a great time to try an Audible 30-day trial and share some awesome audiobooks with your kids!

We hope you find these handy products as awesome as we do. Just an FYI: we participate in affiliate programs, and may receive a share of sales from links on this page.

E.B. White's beloved classic, Charlotte's Web, is brought to life in this 2019 audiobook narrated by Meryl Streep and a full cast of 22 voice actors. The New York Times writes, "Her narration is sometimes warm and cozy, like a grandmother reading us to sleep, and other times as dry and witty as was the author himself."
Buy Now

Little ones will eat up these bite-sized stories featuring beloved Disney characters like Winnie the Pooh, Woody and the Toy Story gang, and Frozen's Anna and Elsa. Each story lasts just two or three minutes, so they're easy to follow, and also help develop listening skills.
Buy Now

Got a Star Wars fan in your house? The second season of the popular new show The Mandalorian will feature the character Ahsoka, but your own little Padawan can learn about her first in this audiobook, Star Wars: Ahsoka by E.K. Johnston.
Buy Now

In this fast-paced novel for ages 8-12, five kids become real-life spies and end up saving the world. City Spies by James Ponti is perfect for kids who enjoyed Stuart Gibbs' Spy School; in fact, Gibbs calls City Spies "a must-read for anyone who loves adventure, intrigue, mystery, and humor."
Buy Now

Jeff Kinney's wildly popular Diary of a Wimpy Kid is not only hilarious, it's also my top recommendation for reluctant readers. Get both the print and audiobook, then have your child read along and enjoy the illustrations while listening to the narration. If your kiddo likes it, there are 15 more books in the series!
Buy Now

Kids Who Love Books, Libraries, and Puzzles Will Love the Bestselling Escape From Mr. Lemoncello's Library

My daughter and I listened to the audiobook of Escape From Mr. Lemoncello's Library together a couple years ago, and we both enjoyed it thoroughly. She loved the humor and fast pace, and I enjoyed all the literary references and clever puzzles woven into the story.
Buy Now

Turn on the audiobook of Harry Potter and the Sorcerer's Stone, and you may be rewarded with hours of uninterrupted time while your kids are entranced by the flawless narration of Jim Dale. Even kids who've already read Harry Potter enjoy the unique experience of listening to it again while playing or resting.
Buy Now

This audiobook is perfect for kids intrigued by science and how the universe works. Celebrity scientist Neil DeGrasse Tyson brings his unique brand of humor and brilliance to this bestselling book, which has been adapted for young listeners to include extra explanations of the trickiest concepts.
Buy Now

Older Kids Will Be Inspired By Hatchet, a Dramatic Survival Story

The Newberry Award-winning novel Hatchet by Gary Paulsen is an exciting story about a 13-year-old boy who struggles for survival on his own in the Canadian wilderness. One five-star reviewer says, "The audio version is captivating...my son was mesmerized."
Buy Now

Why Not Use This Time to Learn French?

With an entirely new approach to learning a foreign language, Paul Noble's audiobook Learn French is a fun and fascinating way to introduce French to kids. It's designed for audio only, with no book, no complicated grammatical explanations, no rote memorization, no writing--no stress!
Buy Now

Look, this is not great literature. But this box set of Minecraft Stories will keep your Minecraft-loving kids entertained while you work from home or make dinner. This audiobook set includes 14 short novels, totaling over 11 hours of narration.
Buy Now

Help Kids Unwind With The Soothing Bedtime Story, The Rabbit Who Wants to Fall Asleep

Internally repetitive and--frankly--boring, this audiobook version of The Rabbit Who Wants to Fall Asleep features two readings of the bedtime story, one by a male narrator and one by a female reader. Your child can listen to the story being read twice, or choose a favorite voice. Parents swear by this sleep-inducing story!
Buy Now

My oldest daughter, a voracious reader and expert book recommender, says this series is the most unputdownable she's ever read. Keeper of the Lost Cities by Shannon Messenger is imaginative, fast-paced, and full of action--perfect for kids ages 10 and up. (I know plenty of adults who love it, too!)
Buy Now

Before or after seeing the film, kids can deepen their understanding of this inspiring true story by listening to the young readers' edition of Hidden Figures. Amazon reviewers call it, "a most remarkable story" and "great for elementary and middle school readers."
Buy Now

Monsterstreet: The Boy Who Cried Werewolf Is Funny and Just a Little Bit Scary

Recommended for ages 8-12, Monsterstreet: The Boy Who Cried Werewolf by J.H. Reynolds is a not-too-long, not-too-scary novel that kids will thoroughly enjoy. ALA Booklist writes: “Reynolds kicks off a series to be based on classic horror story scenarios... most of the short chapters end with a sudden shock or cliff-hanger... Readers hoping for close encounters with werewolves will be well served."
Buy Now

Rediscover the Magic of Peter Pan With This New, Fully Cast Audio Recording

Get an Entertaining Twist on History With Rivals: Frenemies Who Changed the World

Hamilton and Burr. Queen Mary and Queen Elizabeth. Adidas and Puma (yes, the shoe brands). What do these pairs have in common? They were all rivals whose animosity led to historic achievements! This audiobook includes four 30-minute chapters that are as entertaining as they are educational.
Buy Now

Adventure, Treasure Hunts, and Mystery Abound in Smack Dab in the Middle of Maybe

Perfect for tweens, Smack Dab in the Middle of Maybe by Jo Watson Hackl is funny, exciting, and sweet all at once. Publishers Weekly writes, “This piercing, often humorous adventure demonstrates how facing the truth can bring freedom and hope."
Buy Now

Kids who love a spine-tingling story won't be able to press pause on Spirit Hunters by Ellen Oh! Ghosts, a haunted house, and a brave protagonist combine for an exciting mystery that Amazon reviewers call, "amazing" and "frightfully fun."
Buy Now

Teens Will Enjoy the Fun Escapism of The Selection

Recommended for ages 13 and up, The Selection by Kiera Cass is a frothy fantasy that looks like tiaras and ballgowns on the outside, but has an inner core of political scheming and female empowerment.
Buy Now

Laugh at Roald Dahl's Hilarious and Delightful Audiobook, The BFG

My youngest daughter is a huge Roald Dahl fan. Although she adores his more famous books like Charlie and the Chocolate Factory, when I asked her for just one for this list, she recommended The BFG without hesitation. It's imaginative, funny, and entertaining for all ages!
Buy Now

The Boxcar Children Is a Wholesome Classic About Family, Food, and Resilience

I loved this book when I was young, and all three of my kids enjoyed it as early readers. The Boxcar Children by Gertrude Chandler Warner is a classic for a reason; the tale of four siblings who take care of each other on a life-changing adventure resonates with kids in today's uncertain times.
Buy Now

Shiver and Giggle at This Collection of Campfire Stories

From a silly story about farts to a spine-tingling tale set in a graveyard, this collection of 18 Campfire Stories is sure to entertain bored kids! One five-star reviewer says, "Great book...Our five granddaughters are from 4 to 10 years old, and they were just scared enough to enjoy the experience."
Buy Now

Set in a post-apocalyptic underground city, The City of Ember by Jeanne DuPrau is an inventive novel featuring smart kids who struggle to save their society. It's received lots of awards, including being named one of the New York Public Library's 100 titles for reading and sharing.
Buy Now

If your kids loved Harry Potter but want something new, try the gorgeous fantasy The Golden Compass by Philip Pullman. It's been adapted into a film and HBO series, but honestly, you're better off sticking with the original novel. (It's so good, parents may enjoy it just as much as kids!)
Buy Now

Mermaid Fans Will Adore The Tail of Emily Windsnap

Aimed at elementary school readers, The Tail of Emily Windsnap by Liz Kessler is a fresh take on mermaids, featuring a smart 12-year-old protagonist who is surprised to learn her true identity.
Buy Now

The Magic Tree House series by Mary Pope Osborne is an enduring favorite with early readers. Now, kids can listen to the first eight books in this audiobook collection narrated by the author. Although they're aimed at 1st-4th graders, even preschoolers can enjoy these exciting stories!
Buy Now

Listen to 10 Riveting Hours of The Lightning Thief

Buy yourself 10 hours of time to concentrate on work or finally relax! Even if your kids have already read the Percy Jackson series, they'll get swept up in the audiobook of The Lightning Thief, masterfully narrated by Jesse Bernstein.
Buy Now

If your kids haven't experienced Wonder by R.J. Palacio yet, do them a favor and play this audiobook. The story gets kids' attention from the very first lines: I won't describe what I look like. Whatever you're thinking, it's probably worse. From there, the novel explores themes of family, friendship, acceptance, and resilience.
Buy Now