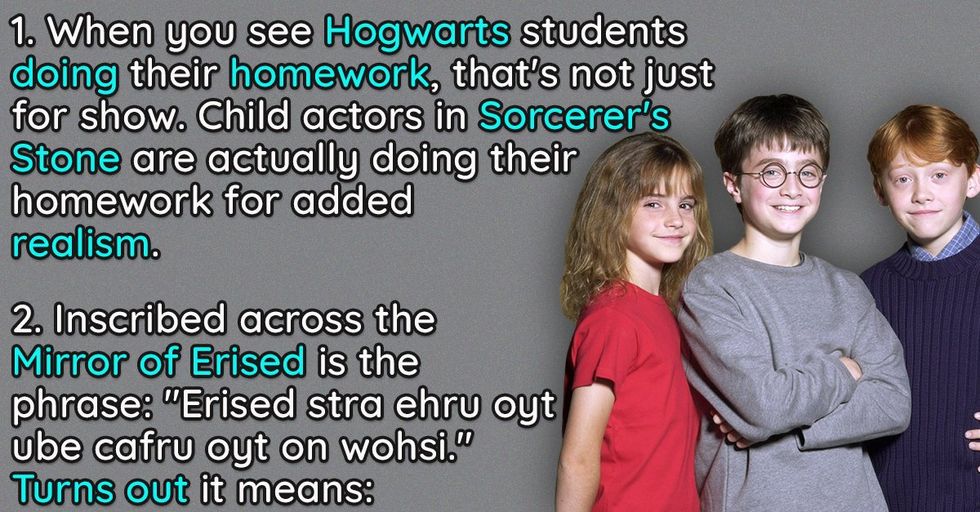 The Harry Potter film franchise may have wrapped up back in 2011, but plenty of Easter eggs and little-known facts remain to be discovered. J.K. Rowling's massively popular book series and its accompanying films are a gold mine of fun facts that you may have missed during your initial viewing. Thanks to the cast, crew, and behind-the-scenes insight available from the Warner Bros. studio tour, we've gathered a cache of enchanting and hilarious  Harry Potter trivia.

Here are 30 facts that showcase the magic of the Harry Potter universe:

Hogwarts' official motto is "Draco dormiens nunquam titillandus." Translated to English, the (very sensible) motto means "never tickle a sleeping dragon."
Remember the Mirror of Erised from Harry Potter and the Sorcerer's Stone? Inscribed across it is the phrase: "Erised stra ehru oyt ube cafru oyt on wohsi." Turns out, the words and sentence are simply backwards; translated, the mirror reads: "I show not your face, but your heart's desire."

These child stars had no choice but to keep up with schoolwork.

Even as a youngster, Dan Radcliffe was ready to provide a helping hand.

Sir Richard Harris (the actor who played Dumbledore in the first two films) sometimes had trouble remembering his lines. Daniel Radcliffe (Harry Potter) would ask Harris to help him by running their lines together, just to give Richard more practice (aww!)

Rupert Grint's audition was quite unique.

Rupert Grint, the actor who portrays Ron Weasley, made up a rap for his audition. He recounts it for fans in the video above, and it goes a little something like: "My name is Rupert Grint, I hope you like this and don't think I stink..."

The Chamber of Secrets contains a very subtle crossover...

In Dumbledore's study, a portrait of Gandalf the Grey (that other immensely powerful, long-bearded wizard you may know of, from Lord of the Rings) hangs on the wall.
According to J.K. Rowling, Moaning Myrtle was a member of Ravenclaw House.

The arachnophobia is real.

During Chamber of Secrets, Harry and Ron "follow the spiders" into the Forbidden Forest much to Ron's chagrin. Ron's frightened look, and his pure terror throughout that scene, was not acting. Rupert Grint is legitimately as terrified of spiders as his character.
Eddie Redmayne, who now stars as Newt Scamander in the Fantastic Beasts and Where to Find Them series, auditioned for the role of Tom Riddle in Chamber of Secrets.
The books that form Dumbledore's library are cleverly disguised. For the most part, those books are actually phone directories covered with leather and a layer of dust.

Apparently, a few adult stars in The Prisoner of Azkaban (#3) were regular pranksters.

During the filming of a scene in which all of Hogwarts' students are sleeping with sleeping bags in the Great Hall, director Alfonso Cuarón, Michael Gambon (Dumbledore), and Alan Rickman (Snape) hid a remote-control-operated Whoopee Cushion in Daniel Radcliffe's sleeping bag. Daniel had requested to be next to a girl he had a crush on at the time, and tried very hard to stay in character through everyone else's laughter.

Prisoner of Azkaban also has a glaring plot hole.

The opening sequence of the movie sees Harry using magic while outside of school; this is supposed to be forbidden. In movie number 5, Order of the Phoenix, Harry is summoned for a disciplinary hearing for this very offense, yet here he's perfectly fine. Cool sequence, but not consistent.

The meaning behind that famous Patronus spell:

The spell used to ward off demeanors, Expecto Patronum, translates from the Latin to "I await a guardian."

Can you see the family resemblance?

J.K. Rowling's two Grandfathers, Stanley and Ernie, have characters named after them in the Prisoner of Azkaban. These names are used for the conductor and driver of the Knight Bus, respectively, in the film.

The actors grew really good at getting into character.

Director Alfonso Cuarón had Daniel Radcliffe, Rupert Grint, and Emma Watson (Hermione) each write an essay about their characters from a first-person point of view. Emma Watson wrote a full 16-page essay, going above and beyond just as her character is wont to do. Daniel Radcliffe came up with a one-page summary, and Rupert Grint didn't turn anything in. His reasoning? "I'm Ron," he said. "Ron wouldn't do it."

When Harry opens up the Marauder's Map, which tracks the movement of everybody within the Hogwarts grounds, the name 'Newt Scamander' is included. That was supposed to be a reference to a famous author in the HP universe, but since the development of Newt's character in Fantastic Beasts, the name may now be Scamander actually visiting his old friend Dumbledore.

One Goblet of Fire scene had a secret fail.

One take of that iconic moment when Hermione descends the stairs, all dressed up for the Yule ball, saw Emma Watson trip and fall down the stairs!

Mike Newell, director of the Goblet of Fire, didn't know that Alan Rickman wore black contact lenses as Snape. He was taken completely by surprise when, as they were talking, Rickman suddenly popped one of his contacts out!

A full-size dragon was constructed for Goblet of Fire, built partially from the remains of the basilisk prop from Chamber of Secrets.

And, of course, all animals were well-cared for on set.

If you look closely, Harry Potter and the Goblet of Fire's closing credits contains an important disclaimer: "No dragons were harmed in the making of this movie."

J.K. Rowling believes in being thorough.

J.K. Rowling created an extensive family tree for Sirius Black. The Black family tree tapestry in Order of the Phoenix contains over seventy individual names, with details of relations between each person, and with specifications as to whose names were burned off of the tapestry.

Evanna Lynch (Luna Lovegood) was especially dedicated to her character.

Luna Lovegood's radish earrings in the movie are actually made by Evanna Lynch, the actress who plays her.
While Order of the Phoenix was being filmed, Alan Rickman banned Rupert Grint and Matthew Lewis (Neville Longbottom) from getting in his new BMW. During the filming of the previous movie, they had spilled a milkshake inside of his car.

The movies provide a source of scar-discourse.

The HP books never specify where exactly Harry's famous scar is placed on his forehead, those many people assume it's front and center. In the movies, however, Harry's scar is consistently off-center.

Proof that Maggie Smith is a BOSS.

Dame Maggie Smith completed filming on the Half Blood Prince (#6) whilst undergoing her radio-therapy treatment for breast cancer.
In Deathly Hallows, Part 1, several of Harry's friends and protectors take Polyjuice Potion to transform themselves briefly into Harry. The scene was intense for Daniel Radcliffe, who had to complete over ninety takes for one single shot.
Over ten thousand coins were made for Deathly Hallows scene inside the Lestrange's Gringotts vault.
Harry's lightning bolt scar was applied by the make-up team over fifty-eight hundred times by the time the franchise ended. Daniel Radcliffe himself had the scar applied to his forehead about two thousand times, while the rest were applied to his stunt doubles.

According to Tom Felton (Draco Malfoy), Voldemort's stiff, strange hugging of Draco was not in the script. Ralph Fiennes, who plays Voldemort, improvised the move. Malfoy's paralyzed reaction is Tom genuinely not sure what to do about it.

All in all, prop crafting and attention to detail in this franchise was pretty spectacular.

Over five hundred wands were created for the film. Many of these were broken during their use, Daniel Radcliffe being the primary culprit. He broke about eighty wands over the course of the series, reportedly because he'd use them as drumsticks!