30 Most BIZARRE Insults President Trump Has Ever Tweeted | 22 Words 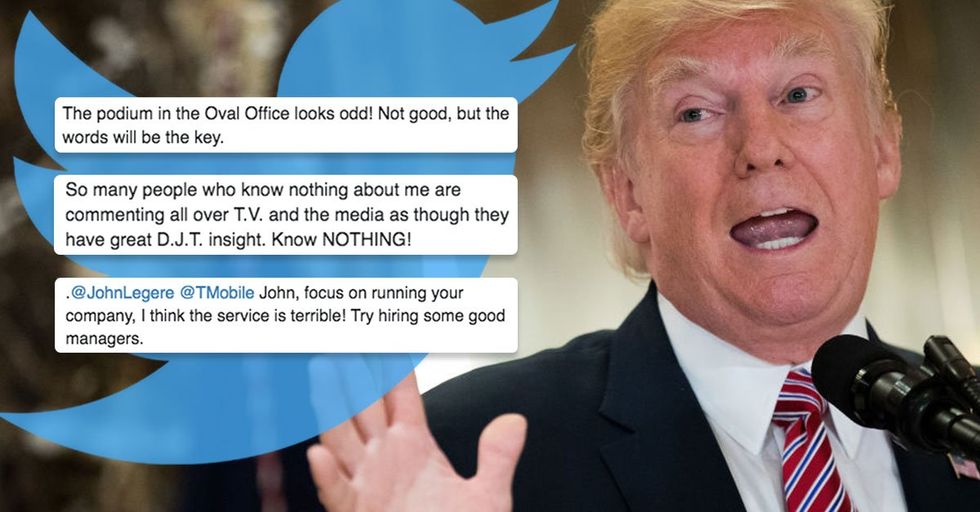 30 Most BIZARRE Insults President Trump Has Ever Tweeted

Our President sure likes to pick fights.

He's tweeted out a variety of different insults over the course of, well, his lifetime and The New York Times recently compiled them all into this handy dandy directory.

They've logged 359 (and counting) different targets. We've scrolled through and chosen thirty of the most ridiculous wars he's ever waged with words.

So what if most of them spent their entire careers serving the American public? Our President doesn't care about silly commitments like that!

First you spend 114 years delivering the American public their favorite pastime and then this!? MLB, how dare you?

I mean, it's not our favorite song ever either, but still. No need to shame the poor song on Twitter. What did the song ever do to you, huh?

Who cares if they elected you into office? They can still be so wrong!

I too found the debates to be quite dumb. But I'm guessing we didn't find them dumb for the same reasons.

Man, he really doesn't like these people. Can you say frenemies?!

In case you missed it, out President is not a huge Amazon fan recently. It's honestly too bad. There are so many great shows on Prime these days. He's really missing out.

The United Nations is a club for people to get together, talk, and have a good time? That sounds so fun. I'm in!

Wow, poop jokes? We thought you were better than that. Just kidding. Seems totally fitting.

I mean, we couldn't very well leave Obama and Hillary off this list entirely. They're like his favorite targets ever.

Just a whole bunch of states. Which ones, exactly? You decide!

Actually, I'm pretty sure there was a much bigger witch hunt that happened a long time ago. You can learn all about it in Salem, Massachusetts. Go during Halloween. You'll love it. Probably for the wrong reasons, but you win some you lose some!

We got so wrapped up before with those Republican, we almost forgot about the Democrats! Silly us.

His own Attorney General

Thought climbing onto that payroll made you safe, Jeff Sessions? Think again!

The State of New Jersey

Not just the shore. The whole, dang thing!

Beloved American tradition? Or our President's personal punching bag? You guessed it!

So what if she earned so many Oscar nominations that she broke her own record? Our President doesn't care about minor accomplishments like that.

I love Snoop. I have no witty remarks. I'm just peeved.

I mean, I agree with you here, DJT. But did you need to shmear this POV all over Twitter?

Who cares if he founded a company back in the 1990s acquired by Yahoo! for 5.7 billion dollars? So what if he's mentored countless entrepreneurs-in-the-making via Shark Tank? He can fight in Twitter feuds just like anyone else!

Really? You're going after the head of the Avengers? Yikes.

The Cast of Hamilton

HAMILTON IS NOT OVERRATED. ...shouted musical theatre nerds all across the country.

Are they? That seems like a whole lot of scheming.

What do you guys think John did next? In my mind, he soothed himself with a nice, cold Frosty. Don't know why. That's just the first image that came to mind.

And last but not least...U.S. Legal System!

With all the time our President's spent (wasted?) crafting these insulting tweets, doesn't it seem like he could have honed a entirely different, worthwhile hobby instead? A hobby like...golf! Oh wait....