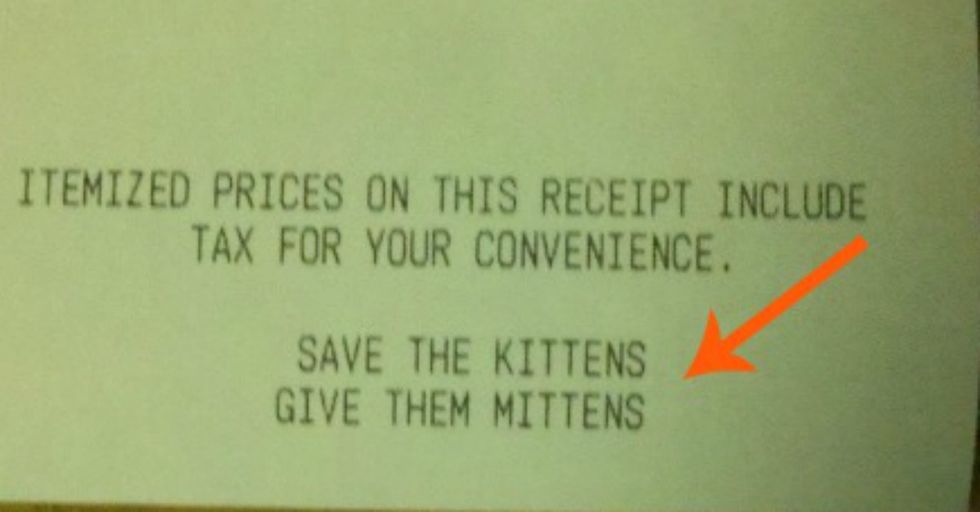 30 of the Best Things Ever Found On a Receipt

Smart shoppers and diners know they should check their receipts to make sure that nothing went wrong with their transaction.

But what you don’t expect to find — whether you’re the purchaser, the seller, or the server — is something that will make you either laugh, shake your head, or demand an explanation more than a refund.

You've been warned. But if they're decent ninjas, you won't even be able to see them.

Do a Little Dance

So do they do a little dance when they deliver your food or is that just an unfortunate abbreviation? Either way, it costs you $7.

Read Between the Lines

Wow, they're really branching out with candy flavors. Do you have to show ID for that?

Considering this is a receipt for Swingers — which I assume isn't a playground for children — I'm thinking "ass" might just come up a little more than in other places.

What can we say? Michael Scott would be proud of them for sticking that in there. (That's what she said.)

It's not every day you get rewarded with a discount for having good kids, not to mention the fact they're inviting you to taste win. Win-win!

You have to admit that you would probably want to go back a few more times just to see what other jokes they would leave. Without yo mama, of course.

It turns out that Trade Secret's real secret is that they have a little racy business going on on the side. That leaves me wondering if "nail smoother" is now code for something else...

And you know you're not going to bring the donut back, so why is paper and ink involved? Probably to entertain you while you eat your delicious donut.

Does that come with a side of Nerds? Or maybe a couple of Airheads?

How about a preventative measure, you know, just in case she's a little bit difficult. Just because we have to deal with her doesn't mean you have to!

I'll have your cheapest ass beer, and keep them coming!

She found a snake on the floor in California Pizza Kitchen so she took it and tossed it outside. When she walked back in, everyone applauded.

Just in case there's any confusion as to how to make a smoothie, they give you specific directions. So helpful!

They can be easy. Sometimes they make perfect sense. But not this one here.

For the low price of $3.99, you too can bring home your very own wife! Sorry, no returns or exchanges. What's done is done.

Now that's a creative tip for a hard-working hotel housekeeper. Honest Abe, getting a little bit freaky there in the sheets. Who knew?

via: Banned In Hollywood

Apparently that's now a quantifiable measurement for lunchmeat. Good news for you. Bad news for the turkey.

Out of This World

Just think... If those customers hadn't been jerks, this server might never had received such a masterpiece. Faith restored!

He's not just Tom. Tom is as MAN, and don't you forget it.

To be clear, they bought bike supplies and tennis balls. What else were you thinking?

The bummer is that your tip is rolled up like drug paraphernalia, but at least you could get a good chuckle from it.

Yes, will you please toss my salad? See above: That's what she said.

When you let customers draw on the paper tablecloths, you're going to get some creative tips. The beer probably helps, too.

Think of the kittens! So many poor felines wandering around without proper paw protection!