30 People Who Just Flat out Lied on Social Media, and Then Paid the Price | 22 Words 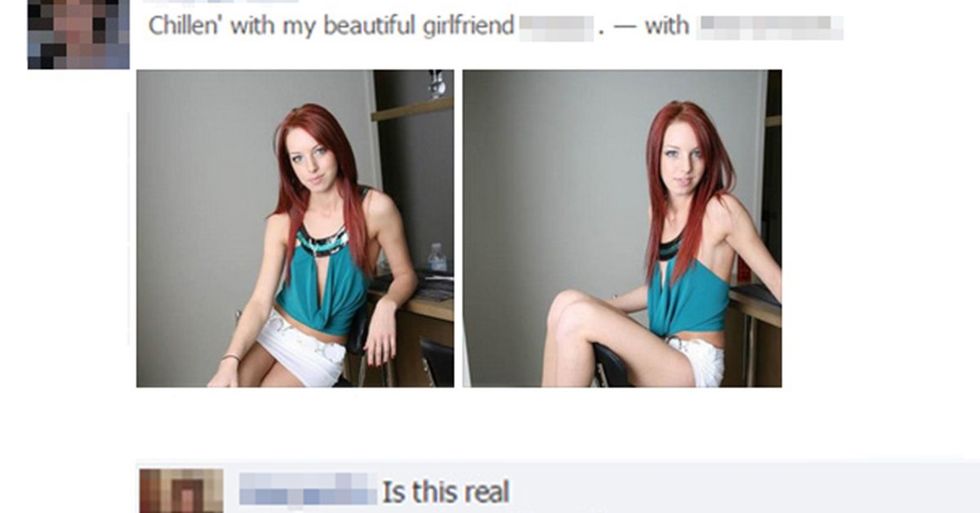 30 People Who Just Flat out Lied on Social Media, and Then Paid the Price

The thing about the Internet is that if you're going to post something for the whole world wide web to read, you'd better make sure you're not just pulling things out of thin air.

In other words, people have Google and will call you out on that crap. And, as you can see from these people, it can be pretty ruthless, but also highly entertaining...

First of all, points for the use of "okie dokie." Second, at least they admitted they're wrong, not that they really had any choice. That said, it's clear they're a little misguided in their original statement, right? I mean, "judge not," etc...

But he will tell you not to put words in his mouth. That guy looks like he knows exactly how to get in shape. So I'm inclined to believe him when he says what is or isn't the right way to get the job done. Tri, tri again...

What's more terrifying? They're both pretty unpleasant prospects, but I would probably rather ingest the pink goo rather than have to dive headfirst into the realm of teletubbies. If you have kids, you probably feel the same way. The thought of mechanically separated chicken or the Teletubbies?

Maybe she's going to take a nap at the club? Or maybe she's trying to be a little sneaky, but with limited success. Don't lie, folks, especially in the age of social media. Just trying to help her out here, but yeah, totally busted.

What a coincidence! So did a really famous person. Did you think you're getting away with something like this? Because it's not going to happen. People have the internet now. You're totally famous!

But...but...what happened to your belly button?!? And your stomach looks so smooth and not-red. What kind of sit-ups are you doing here? Photoshop must have eaten your belly button. You poor soul.

She might have gotten away with it if it wasn't for that pesky "via mobile" situation. People really have no problem running their mouths with no idea what those on the other side can see. If this is how you speak to the outside world, be careful what you say.

Did I say Paris? I meant Paris, Australia. Tiny little city. You've probably never heard of it. Unfortunately, neither has everyone else, which means they all think you're a liar.

There's this little thing called "Google." Have you heard of it, dude? Reverse image lookups will be the bane of a liar's existence.

She looks really great for a time traveler! I guess even those born way back in '77 have different body images. Did they not change until 1991 or something? Must be a generational thing.

What? You mean I have to actually leave a tip on the one for the server? Ha, umm...just kidding. Added an extra zero there by mistake. I guess maybe this person isn't as virtuous as they seem.

What was the thinking here? "Dude, take a picture of me acting like the sun is in my eyes!" The shadows say otherwise. Don't fight astronomy, buddy. You'll lose every time.

Well, vegan minus chicken and beef...and maybe eggs and some dairy. Other than that, totally vegan. I guess there's such a thing as a "flawed vegan," huh?

You know...Dave! Goofy Dave! He's also a model, so there's that. Chances are, she doesn't know him. So how is she going to break the news that the engagement's off?

It's good to have confidence, but maybe keep that to yourself...or don't post your status from your phone. Unless your phone IS a library computer. In which case...weird. Don't lie, folks.

Dang! Mom savagely rang her UP! Uh, don't call your parents poor. On Facebook or anywhere else, please. It's really bad form, and your parents will almost certainly yell at you.

What do you mean? Is it too late now to say, "Sorry?" Yes, yes it is. Your name says it all, and it's hard to posit that you're a casual fan with that screen name.

The Wonder of Nature

That's so crazy that it could happen exactly the same way over that mountain as it did in the picture. What are the odds? Well, they're pretty darn good if you're trying to crib an Internet picture as your own for the purposes of bragging online.

Rick/Nick. Close enough. I wonder if the last name will clear any of this stuff up. If not, well, we all figure this guy just stole it, so we'll go from there.

Club Couch. He's pimping it at home on his couch. Maybe "the club" is just a cute nickname someone has for trying to get people to think they're more active than they are. In which case...kudos.

You know it's bad when the actual airline calls you out on your crap. Then again, you don't know. Maybe he did charter the flight... Ouch, nothing like being called out by a major corporation online. That's a dicey proposition.

Oh! Great! In that case, nothing to see here! Did they really think they were going to get away with trying to pass of the pic, frame and all, as their own work? Someone give them points for being bold, at least.

I don't know what's more disturbing — the lie about the score or the fact the test says, "an below avarage." I'm going with Door No. 2. Speaking of which, I'm guessing these people probably run into doors regularly trying to navigate daily life.

Oops! I accidentally posted ANOTHER picture of myself to various social media accounts with a complete caption. "Silly me, I'm just an Instagram natural who can't help but post." Maybe she should try getting a job on the platform to put those talents to use.

Eyeliner doesn't count. That response begs the question, "What does count when you're trying to put this stuff together for an online photo?" But spelling does, my friend.

You don't know. Maybe they have the same hairdresser who has a dry sense of humor? Or maybe the person posting this just watches late night TV like millions of other folks. That's the more likely situation. In fact, it's a certainty.

Well, this is awkward. But on the plus side, no one is dead! Well, that poster's sense of self-esteem might be. Is this the worst way to brag about date night? I'm thinking yes and so is everyone else.

Yes, my girlfriend who is a model and only has one outfit that she wears whenever I take pictures of her to share and YES SHE IS A REAL GIRL. Using a dead person as a fake girlfriend is a special type of morbid approach to lying.

Ha, what? No, no way. Nothing but morphine pulsing through these veins. Regardless of what is coursing through, I would imagine that the morphine would be some welcome relief at this point. That's true for everyone who lied on this list, actually.