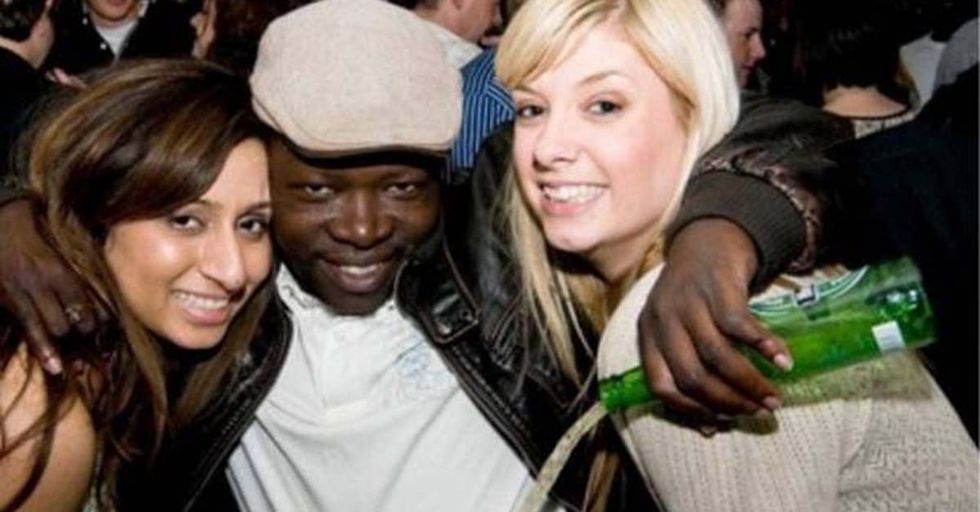 There's no harm in getting together with some friends (or even some strangers) for a few drinks. But when "a few" turns into "many," things can get real sloppy real quick.

We've probably all been on the giving and receiving end of these hilarious party fouls, so now we can enjoy them from far away knowing that all that flying beer isn't going to hit us. Check out what happens when people party too hard for their own good.

Sometimes, you're just so excited to make a new friend, you forget how motor skills work.

Uh, it gets messy if you don't put the hose in your mouth, man.

You had one job, buddy.

He'll realize it when he notices his lips are dry.

Sometimes you cheers with too much enthusiasm...

That guy DEFINITELY knew what he was doing.

Her face makes me think there was a cockroach in there or something.

I'm guessing they're in some sort of wind tunnel.

The real crime here is the way that guy's dancing.

If I had to see that guy's moves, I'd probably throw liquid in my eyes, too.

Something tells me he's not going to notice. Or care.

Too much milk, fellas. Let me call you a cab.

Things are about to get...unpleasant.

I love the oblivious look on people's face when they have no idea they're about to get soaked.

He's not as smooth as he thinks he is.

Congratulations. You played yourself.

Well, the good news is: it's a ping pong ball. How bad could it be?

She appears to have accepted her fate. She's a sea person now.

Whoa. She really misjudged this one!

Again, a soft cheers is fine. Don't try to prove anything by bashing mugs together.

The guy spilling the drink is the only one who realizes what's about to go down.

Ok. This one looks pretty intentional as well.

Sometimes, when parties get really crazy, people throw mashed potatoes at one another.

How much beer is in this picture?

It appears she held the wine glass upright as long as she could.

Was there a CGI budget for this photo?

The girl on the right's face is priceless.