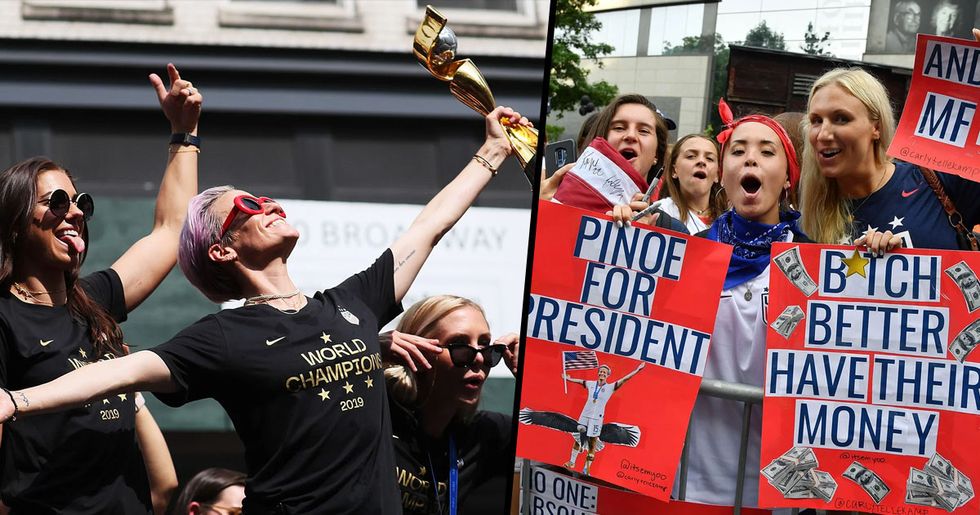 [Imagined overheard conversations at the U.S. Women's Soccer Team Parade down the Canyon of Heroes]:

A: Hey dad, what's going on over there?

B: Oh nothing, dear, it's just some women celebrating.

A: Hey dad, why does it look like a protest?

B: Because they can't just be happy that they won.

C: Don't listen to him, honey, it's hard for your dad to understand that sometimes sport has to get political.

C: Because, for women, if they don't mobilize politically, they get thrown under the bus.

A: But these women are on top of a bus?

Word on the street is that no one's interested in lady soccer...

Maybe that's what some people are saying, but you know what speaks louder than words?

At 9.15 am on Wednesday, Broadway was engulfed by tens of thousands of fans waiting to welcome back the winning team.

They were coming home from their 2-0 victory against the Netherlands.

The USWNT basked in their glory and made (the majority of us) feel so proud.

There's no other team that I'd sooner see holding the flag.

The USWNT got a bit of stick for dropping a U.S. flag during the tournament, obviously, they had other things on their mind (like winning), but surely, now, as they honored the flag during their victory parade, we can lay all of that to rest.

How many times have the USWNT become world champions again?

"You play like a girl" can no longer be a playground taunt, it only makes sense as a compliment.

After the controversy over wages, the primary argument as to why female players don't get paid a fraction of what the men do is that they don't draw in an audience. The crowds in NYC made it clear that, if the team were given more matches, if the team's matches were broadcast, they would be watching.

The poster game was on strong form at the parade. There were more than one expressing a call for Rapinoe to step up as a presidential candidate.

There were indeed some "Trump 2020" banners flying around.

Whatever your political stance, The USWNT brought pride to the entire country.

There's nothing quite like soccer to bring together a divided nation.

This win also flew the flag for another kind of pride...

Whatever flag you think best represents who you are, the USWNT celebrates all.

"I'm loving the enthusiasm, it's not even noon yet."

Alex Morgan thanked fans for their support outside City Hall, adding "thank you for your chants, your posters, and your signs, keep them going."

Rapinoe, who scored the goal that put the 2 in the 2-0 victory took to the mic.

Rapinoe sums up the USWNT in three words:

"This team is so resilient, so tough, just so badass."

"There's nothing that can phase this group."

Rapinoe celebrates the diversity of the USWNT: "We've got pink hair, purple hair, we have tattoos and dreadlocks, we got white girls and black girls, and everything in between, straight girls and gay girls! I couldn't be more proud to be a co-captain of this team."

"There's no place I'd rather be, even in the presidential race."

Rapinoe let the crowds know that political leadership is not her game, joking during her speech, stating: "I'm busy, I'm sorry."

The USWNT had one overarching message for the people of America.

Rapinoe stated, "We have to be better..."

"It's time to come together."

Rapinoe calls for a truce on the contention surrounding the sport and the team. She says: "There’s been so much contention in these last years. I’ve been a victim of that. I’ve been a perpetrator of that. With the fight with the federation, (I’m) sorry for some of the things I said, not all of the things. But it’s time to come together. This conversation is at the next step."

"We have to collaborate. It takes everybody."

"This is my charge to everybody, Do what you can. Do what you have to do. Step outside of yourself. Be more. Be better. Be bigger than you’ve ever been before."

If this team is any representation of what you can be when you do that, we're in.

"We took so much on our shoulders to be here today, to celebrate with you today. And we did it with a smile. So do the same for us. Please, I ask you."

Is Rapinoe calling for a truce with Trump?

From her speech at the victory rally, the USWNT co-captain seems to be truly calling for a "One Nation, One Team" future.

This was a day for celebration

A day to celebrate, inspire, and let voices be heard.

Chants for equal pay rose from the crowds throughout the parade.

"They showed us that playing like a girl means to be unbeatable."

First Lady of NYC, Chirlane McCray, commended the team on their "skill and flawless teamwork."

Who runs the world?

According to Megan Rapinoe... "every single person."

Crowds gathered in the streets, on the rooftops...

They gathered in doorways, on window ledges, stairwells. NYC was certainly watching.

This wasn't just a victory for the USWNT...

It was a victory for America.

Without USWNT coach, Jill Ellis, who knows where the team would be? Ellis has given her life to the team and to the sport. Witnessing Ellis receiving her key to the city is a moment that we should all celebrate. Who's going to be booking tickets to NYC for the 2023 victory parade?