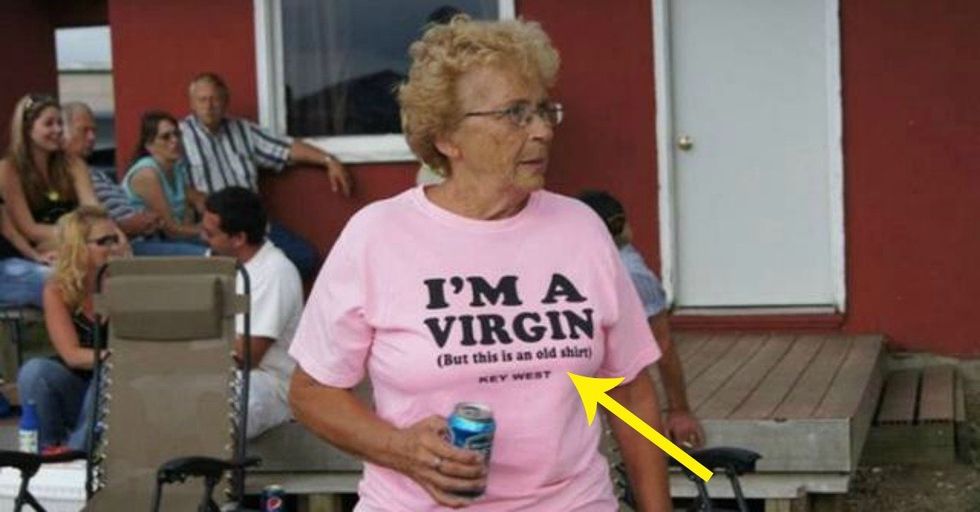 I have nothing but respect for my elders. Most of them grew up in a time before superstores and all those things we take for granted, like technology, phones, transportation, and extra guac on our burritos.

In other words, they've been around the block a few times, but they're still trucking on and most of the time without a verbal filter.

And as these older people prove, you're only as old — or as awesome — as you feel.

Your jeans look a little bit worn. Let grandma spot you a Benjamin for a couple new pairs.

In fact, even if he's not lost, make sure he's hanging with Jan. She looks like she could be quite fun!

Where There's a Will

There's a grandma willing to make a joke about it. Good thing she didn't also ask for green bananas.

What? I see nothing wrong with this, other than the sleeves are a little bit short.

And have no time for that pretentious hipster bull crap. After all, they were hip before being hip was even a thing.

Well, that takes care of that problem. You young kids are so good with technology!

When your 90-year-old grandma makes you a vest to wear at parties, you wear the vest. And quite frankly, he's rocking it.

She is excited about meeting your new friend, have no doubt. But the CAPS LOCK ALSO MAKES THINGS SO MUCH EASIER TO SEE!

Let's just say Richard knew how to make his presence known. But is the town ready for Big Dick?

Man's best friend looks like she has a pretty great human friend, too. No, you're the one crying...

We don't recommend this at home, but damn if that doesn't kind of look like fun. (With non-alcoholic beverages while wearing seat belts and driving slow.)

Pink leggings and sweatshirt? Check. Skateboard? Check. The envy of the senior community? Check and checkmate.

Is grandpa sneaky like a snake? Either way, granny ain't having it.

It seems grandma might have some issues with cats that she needs to work out... I guess she's more of a dog person.

You're never too old to ride on the back of a shopping cart. Never.

After fifty-seven years, he's still got it. Who said romance is dead?

What's better than cats? Cats in 3-D. (And it's a pretty safe bet this isn't the grandma from up above who has questionable litter training motive.)

Selfie see, selfie do. It all comes back around...

He will go to that stupid art class, but he will not enjoy it! No, no will not!

That's probably not what he had in mind. But it's good to know grandma loves you, even if no other ladies do.

“Get your horse ready, Earl! Mama is ready to hit the streets." “What? You want a divorce? And you hid some treats?"

Who needs fancy suspenders when you have a belt loop and a bungee cord? Not this wise old man, that's for sure.

When your grandma loves Tim Tebow, you get grandma a life-sized Tim Tebow cutout for her birthday. No questions asked.

Pack Your Bags for a Guilt Trip

You must be really, really sick if you haven't called or written, right? If you weren't knocking on death's door you surely would have stopped by from time to time. Anyway, get well soon!

Poor Ralph. He just wants a U tube to record his granddaughter's dance video. Is that too much to ask, Dollar Tree?

On the one hand, you look fabulous! On the other hand, your friend? Not so much. Grandma Judy is just looking out...

It might be an old shirt, but you're certainly wearing it well. Look out, Key West!