30 Pictures That Will Give You Guaranteed Whiplash | 22 Words 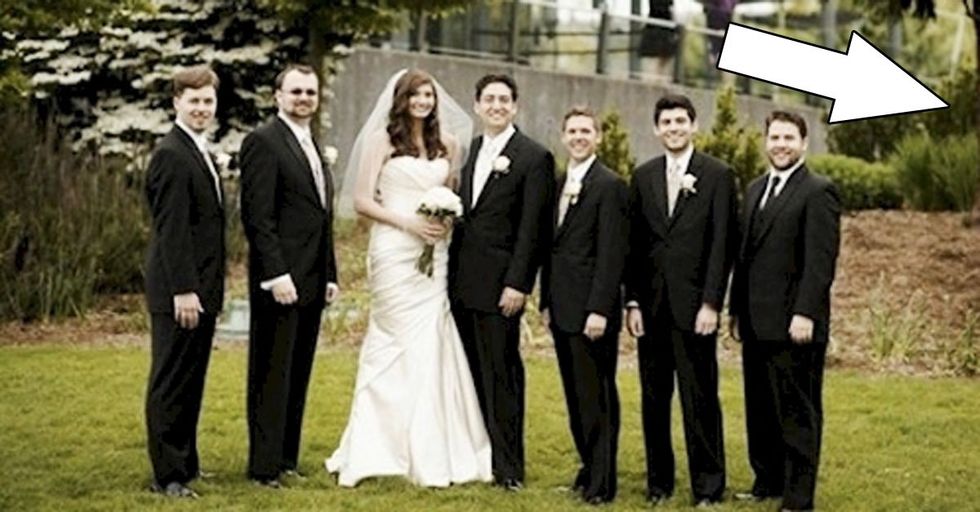 30 Pictures That Will Give You Guaranteed Whiplash

At first glance these photos look pretty typical, mundane even. Wedding, graduation photos, team shots, nothing to see here. But wait! Actually they are the M. Night Shyamalan movies of photos: they all contain a twist!

Something seems slightly out of place in this bridal shot

What every bride dreams of on her wedding day: a perfect dress, friends, family, and a strange man dressed as Waldo crouching in the background of all her wedding photos. Perfect for framing over the mantelpiece.

Take a closer look at the man in the bikini bottoms

Notice anything? Sometimes you take a photo at the exact perfect moment and end up giving someone a whole new look.

Look in the lower right corner. This cat is a furry little ninja who will 100% knock over this vase of flowers and walk away like nothing happened.

How many people do you see in this photo?

Did you see the girl lying down on the left? Look, sometimes its been a long, cold winter and and you haven't been out in the sun in awhile and also you are a permanent resident of Transylvania and all these tanned tourists are really cramping your style.

Nothing out of place here

Except the Labrador retriever, but he enrolled in Psych 101 fair and square. It's not his fault nobody asked if he was a dog. This one is obviously adorable, but the next photo is actually a pretty embarrassing mistake.

When you take a selfie, remember to check what's behind you

Or you might end up accidentally showing the entire internet your butt.

A pool full of bobcat cubs? Sign us up!

Oh wait, didn't see you behind the couch there, ma'am. Never mind. Wait actually, on second thought,  we'll risk it. Look at those little ear tufts!

This one is a triple take!

At first it looks like a cute couple enjoying a sports game. Wait, is the guy in the background grabbing his crotch? Wait, nope, that girl is grabbing his crtoch. I mean, to be fair, there's no more romantic place than the bleachers at a public sporting event.

This is just a normal photo a father celebrating the graduation of his toddler from The School for Children with One Giant Hand, actually. Ready for a really mind-bending one, next?

This girl in a crop top will make you look twice

That's one way to get rock hard abs.

This one takes some focus

To see the kid making a surprise appearance between the couple. Maybe they were having a really, really bad hair day.

At first glance, this just looks like a girl with a topknot

This one is pretty blatant, actually

The third Finding Nemo movie is going to be lit.

A last ditch attempt to remain a bachelor. TBH, it's pretty impressive he didn't put the letters on upside down or backwards. This took a lot of forethought that he apparently didn't put into popping the question.

When you're working from home but you have to do a video conference.

How may owls are in this photo?

When your owl husband won't stop photobombing all your owl glamour shots.

Wait a second, whose arm is that?!

At first, it just looks like she's wearing a normal outfit

But on second glance, she may want to rethink the cut of her blouse. It's a little NSFW.

Can you find overly enthusiastic Uncle Steve in this photo? He just loves Christmas SO MUCH!

This one needs to go in a frame

via: When You See It

The photographer actually had several shots to choose from but she just happened to really hate Aiden in particular.

Like, later when she realizes she posted a photo of her dog helping himself to a long drink from her toilet in the background.

A cute graduation day photo, with a twist

It's hard to tell if the girl in the middle knows those girls or if she just decided to go around making everyone's graduation photos slightly terrifying. We respect either situation.

It's so embarrassing when you and your floor accidentally wear the same outfit.

Extensions made of spiders! But actually can someone please help that girl.

"GUYS you said you'd wait for me to get out of the shower before you did the selfie!"

The perfect Halloween costume for introverts

When you don't feel like talking to anyone anymore, just stand very still and pretend to be a plant. It's genius!

When you can't get a babysitter but you're not going to let that ruin your girls' night in.

"So, where are the kids tonight?" "Don't worry about it, Karen."

This photo was taken at the perfect moment

...to catch the girl in the orange picking a wedgie.

Just a normal row of shirts

You have been visited by the Clothes Demon, for the rest of eternity all your shirts will shrink, your buttons will pop off unexpectedly, and your whites will be dyed pink. Bow before the Clothes Demon.

Look at the kitty!

No, not that one. The demon one hiding in the depths of the TV stand.