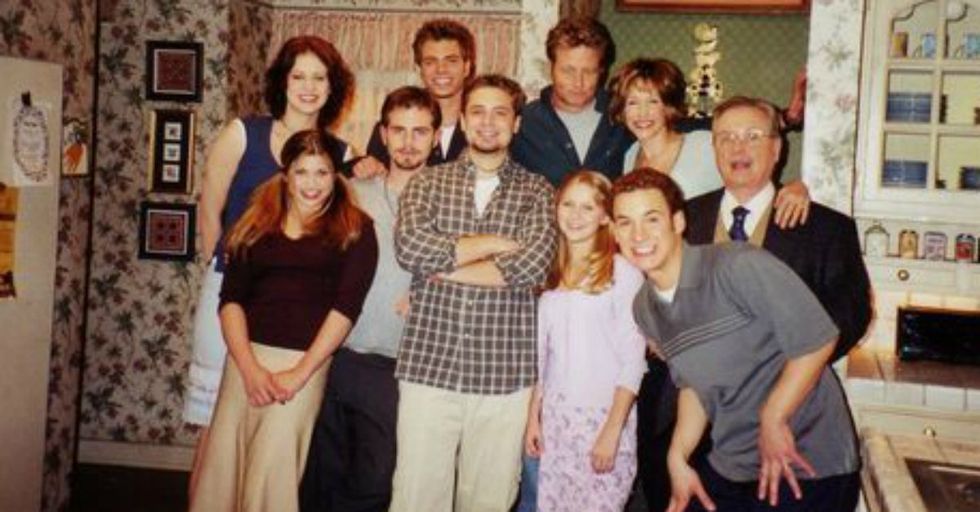 Boy Meets World is a timeless classic. If you grew up in the '90s, you spent your nights in front of the television, growing up right along with Cory, Shawn, Topanga, Eric, Morgan, Mr. Feeny and the rest of the BMW crew. They were part of your life. You knew everything about their lives...or did you?

Below, read about some pretty fantastic secrets, scandals and behind-the-scenes facts about Boy Meets World that you probably didn't know.

Originally, Cory was supposed to have two best friends. In fact, in the first three episodes of the show, Cory has another friend in addition to Shawn. But the characters just didn't stick. The cast even called the cafeteria chair on the other side of Cory the "death chair" because those actors never returned.

The actress Marla Sokoloff was originally cast as Topanga, but she was only supposed to be in a couple episodes. The producers decided it wasn't working and recast Danielle Fishel in the part. Could you imagine living in a world where Danielle Fishel wasn't Topanga? Yeah, neither can we.

The actress who played Dean Bolander, Mr. Feeny's romantic interest and eventual wife, is married to Feeny in real life! Actress Bonnie Bartlett and the legend himself, Willam Daniels, have been married for over 60 years. Talk about true love!

Rider Strong, who played Shawn, and Will Friedle, who played Eric, rarely appeared in scenes together over the course of the show, and there was a very specific reason for this. Apparently, they were such good friends that they could never keep it together enough to finish a scene. They'd burst out laughing and ruin the take almost every time. According to Friedle, “They never let Rider and I do scenes together because we would look at each other and start laughing, so I think over seven years, we had, like, five scenes together."

At one point during the show's run, Rider Strong approached the producers about quitting the show to go to college, but the show's creator, Michael Jacobs, convinced Strong that he could do both. And thank goodness for that. Cory Matthews isn't Cory Matthews without his Shawn Hunter.

Willie Garson played three different characters in different seasons of the show. He appears in the first season as Leonard Spinelli, the assistant manager of the supermarket run by Alan Matthews. Later, he appears as Mervyn, where he shows up at the Matthews' outdoor gear store, and then in season seven, he plays the minister who marries Cory and Topanga. He's truly a man of many talents.

Michael Jacobs wanted Cory and Topanga to marry before the show ended, but ABC thought the characters (who were 20 at the time) were way too young. So Jacobs pushed for an internet poll, and audiences laid down the law! They overwhelmingly wanted to see the couple wed on the show, so Cory and Topanga got married in the middle of the last season.

Danielle Fishel revealed the origin of her character's name in an interview with Maxim: “Michael Jacobs says he was driving down the highway when production called and said, ‘We need a name for this character!’ He happened to be driving past Topanga Canyon, so he said, ‘Topanga.’ He says that if they had called him two miles later, I would’ve been named Canoga, which is the next exit."

Shawn Hunter. The lips, the hair... It's all essential. So it might shock you to learn that Rider Strong absolutely hated the haircut that got all the girls swooning. He told Cosmopolitan, "I hated my hair. I came to the audition with that hairstyle, got the part, and the director Michael Jacobs never let me cut it from there on out. A bunch of girls at a sleepover told me to wear my hair like that — parted down the center — and I was 12, so I listened...I wanted to cut my hair so bad..."

Remember Cory and Topanga's totally awkward first kiss? Well, for Ben Savage, it was his actual first kiss. Good thing it's on tape!

Boy Meets World isn't exactly known as an edgy show, but three episodes have been banned from airing on the Disney Channel. "Prom-ises Prom-ises," "If You Can't Be With The One You Love..." and "The Truth About Honesty" will not air on Disney because they discuss teen drinking and premarital sex. Scandalous.

No Audition For Rachel

Maitland Ward, the actress who played Eric and Jack's roommate, Rachel, on the show, never actually auditioned for the part. She had auditioned for another Michael Jacobs show and he really liked her, so he called her up and gave her the part.

While Maitland Ward didn't have to audition at all, Trina McGee, who played Angela, had to go through five brutal rounds of auditions before they gave her the part. Hard work pays off, though, because Angela and Shawn's on-screen chemistry cannot be beat!

The Man, The Myth, The Feeny

Mr. Feeny was an invaluable mentor to the characters on Boy Meets World. As it turns out, Feeny's portrayer, William Daniels, had a similar Feeny-like relationship with the cast. While he wasn't actually their teacher, Ben Savage told Collider that they "revered the character and the man. When he'd come on set, we'd talk, we'd listen and we'd absorb...He always taught us things, and there was so much to absorb from him." Mr. Feeny is real, everybody. Our dream has come true.

The only two characters to appear in every single episode of Boy Meets World are Cory and Shawn. Ben Savage and Rider Strong  were the best of friends through all 158 episodes.

Most Boy Meets World fans believe that John Adams High School, which the show's characters attend, is a subtle nod to a role of William Daniels'. He played John Adams in the musical and film version of 1776.

In one episode of the show, Mr. Feeny brings up The Graduate and calls it a "great film." Well, he would think so. He was in it! This is another reference to Daniels' illustrious acting career — he played Benjamin Braddock's father (a.k.a. Dustin Hoffman's dad) in the film.

In the first two seasons, Lily Nicksay played Morgan, Cory and Eric Matthews' little sister. But when the character reappears in season three, she's played by Lindsay Ridgeway. It's never explained why she was replaced, but the writers slyly acknowledge the change in one episode when Cory says, "Morgan, long time no see," and she responds, "Yeah, that was the longest time-out I've ever had!"

OG Morgan All Grown Up

Lily Nicksay went on do some crazy awesome things after she was replaced as Morgan. She lived in Scotland for eight years, sailed around Europe and spent some time in Thailand. She's since returned to Los Angeles and started acting again, even appearing in the season finale of Girl Meets World!

Remember Shawn's sister? Neither do we, and neither does Shawn, apparently. In one episode, "Cory's Alternative Friends," Shawn calls his sister, Stacy, on the phone. In later episodes, Stacy is forgotten and Shawn doesn't have a sister at all. RIP Stacy. You were probably great.

Five different actors — that's right, five — play Topanga's parents throughout the course of the show. Her mother is first played by Annette O'Toole, but then she was replaced by Marcia Cross. Her father was played by Michael McKean, Mark Harelik and Peter Tork of The Monkees.

Before They Were Famous

Many future famous folks appeared on Boy Meets World. Remember when Adam Scott (above) played school bully, Griff Hawkins? Or when Linda Cardellini and Brittany Murphy appeared on the show? Maybe the coolest future celeb to appear on the show is Blake Sennett, who played Joey the Rat. Sennett would go on to be the lead guitarist for the band, Rilo Kiley.

If you're a diehard BMW fan, you probably realize that the show skips a few grades. In season two, the characters are in seventh grade, but in season four, they're referred to as 11th graders. Maybe skipping a few grades was a bad idea, because the show's math isn't very good...

Betsy Randle, who played Amy Matthews, joked that Will Friedle "took advantage of situations that required him to kiss on camera." He liked to kiss! And Eric being the resident playboy, Friedle got plenty of opportunities.

In the sixth season, Cory and Eric's younger brother, Joshua, is born. He's played by different babies up until the season finale when Daniel Jacobs, the son of show creator Michael Jacobs, took over the role. Apparently, the child actor they hired for that episode was too talkative during a scene, so Jacobs called his wife, and she brought little Daniel in to save the day.

When we first meet Topanga, she's a staunch vegetarian. But by the end of the show, she's eating pepperoni pizza! Look, Topanga changes in the show just like people change in real life. Plus, there's no way anyone can resist the temptation that is pepperoni pizza. It's just too good.

The final scene of the show is the only scene in which Danielle Fishel's tattoo is visible. She has Chinese letters on the back of her neck, and because she puts her hair in pigtails for the very first time ever in that episode, the tattoo is visible if you look closely.

When the show ended, Rider Strong went home with Shawn's legendary leather jacket. Unfortunately, someone later stole the jacket from his car in Brooklyn! They probably didn't even know they were stealing THE Shawn Hunter's leather jacket.

It might not be a surprise that the cast cried real tears during the filming of the show's final scene. In fact, it could only be filmed once because they couldn't handle another take. After that many years, they were family. Be honest — you cried during that scene too. Boy Meets World means so much to the people who made it and the people who watch it. It will, no doubt, be treasured it forever.