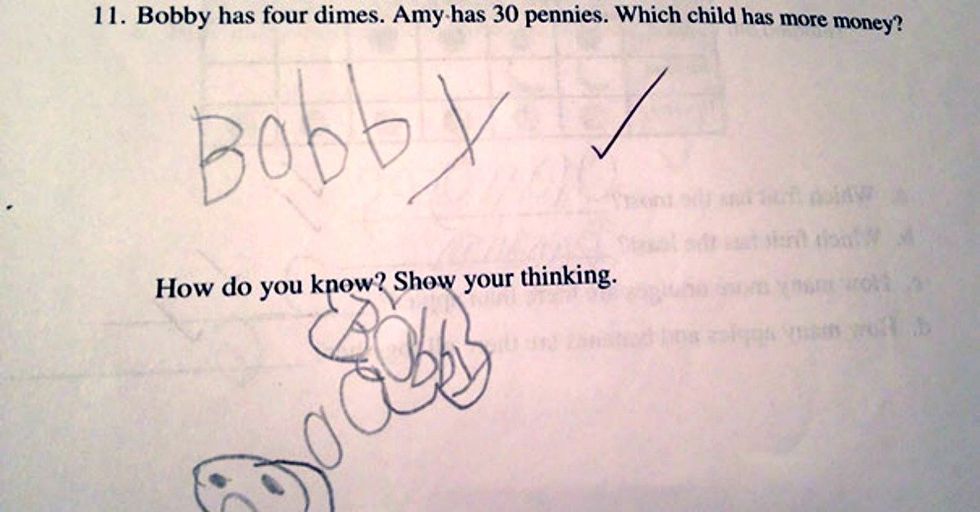 Kids are the silliest.

Have you ever tried to get a kid to do something? Or worse...tried to teach them something?

Sometimes they're quick to comply and learn, but most times? Most times they concoct seriously left-field, totally literal misinterpretations in response to any and all given instructions.

Can we really fault them, though? They barely understand that one word can have two meanings and have wildly imaginative little noggins.

Here are thirty-five times kids misinterpreted things in the most literal and hilarious ways..

Keep Your Eyes On the Ball

When Asked To Put Words In Alphabetical Order...

Look at that focus, though. That's some deep work right there.

She Wanted To Make a Toast...

And boy did they all have a jammin' time. Oh yeah. I went there.

When Given Too Many Grapes and Told To Only Eat Half, This Child...

I guess my main question is, was there any point at which this felt weird, or was it just always feeling totes normal?

When It's Bring Your Fish To School Day

He wasn't wrong. But it feels wrong, you know?

And they stood like that. Staring each other down. Until mom finally got off the freakin' phone and fed him for real, thank GOD.

Mom Said He Couldn't Go Outside

"It's Too Nice To Play Games Inside"

At Modern Art Museums, We Really Think About What The Artists' Are Trying To Say...

When You're Told To Draw Hands On All the Clocks

If one of your major points of reference in life is Beauty and the Beast... ...then this make perfect sense.

Dad Was Trying To Make His Computer Go Faster

I've never met a Tedison... But my whole heart feels like that rectangle really does look like one.

You Said I Have To Use Chopsticks...

Sparky's smart. He'll figure it out.

This Is the Work of a True Realist

Let's be honest with ourselves, guys. He nailed it.

The Teacher Told Them To Write Letters To Santa...

Hehe. I love this.

Mom Said Eat Half My Hotdog...

Not cute. But not wrong.

When the Answer's Right In Front of You

When Mom Says, "Put Your Shoes By the Front Door"

"Don't Take The Clothes Off The Rack and Try Them On"

Okay! I won't do both of those things.

The Deoderent Clearly States "Spray From 15cm Away..."

So precise. So measured.

This Five-Year-Old's Had Enough of Your Questions

So bold. So boss.

Potty Training At Its Best

Whelp. At least he gets the concept.

Well That Got Real Fast...

Just Put The Cookies On the Dining Room Table

Okay, master. Whatever you say...

When You're Told To, "Put Those In the Bathroom"

When You Just Speak Your Truth

Stop Telling Me What To Do, Math

He's gonna be a writer. Or a wild eccentric. You're right. Probably both.

It did. It really did.

Yeah, fool. Get that sh*t outta there!

"Just Put That Toilet Paper Under the Sink"

Did it. Nailed it.

I Followed the Directions...

When Mom Tells You To Clean the Table

You could get mad. But also you need the Facebook Likes, so... *opens camera app*