The 37 Most Worth-It Products Ever, According to Reddit | 22 Words 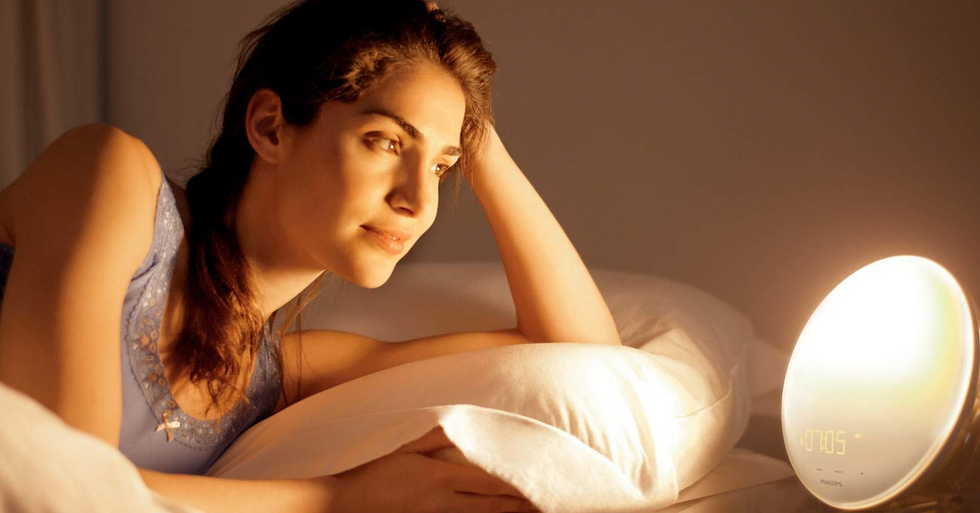 Reddit asked "What is the most "worth it" item you ever purchased?" and oh boy, did the Internet answer! Responses ranged from the sweet (a longtime furry friend) to snarky (a divorce) and everything in between. Since you can't get either of those things on Amazon yet, we focused on the life-changing products that can be at your door in two days or less.

It may come as no surprise that many of these highly-recommended items cater to creature comforts - they'll keep you warm and save you money on coffee and even give you a squeaky-clean butt. But there are definitely some wild cards you'd never expect to be on the list...read on to find out exactly why you need a severed hand prop.

We hope you find these products as awesome as we do. Just an FYI: We participate in affiliate programs and may get a share of the revenue from your purchase.

This Roomba Vacuum Is A Game Changer For The Lazy

"I bought an actual Roomba and immediately had buyers remorse - except that now I don’t. It’s the best thing I’ve ever “wasted" money on. I’m lazy as hell and I have long long hair. The Roomba sweeps my floors every other day and has lasted over 6 years now. I would have a floor layered with hair and dust without it." -raininginsf
Buy Now

"There is absolutely no going back after you have a 10 foot cord. After my first one finally crapped out, I had to use a 3 foot cord for the night until I could run to the store to get a new one, and I wanted to die because I kept almost ripping it out of the wall by accident." -Anything4MyPrincess
Buy Now

"My Leatherman Supertool 300. Had it about 5 years now, and I use it often at work. It's already paid for itself. But honestly, my proudest moment came when someone at work sadly realized they needed a can opener for their lunch, and there were none to be had. Lo and behold, guess what's in my pocket..." -moronicuniform
Buy Now

"Electric blanket. I can hardly tolerate the cold and you can make you bed toasty before you get under the covers. The warmth is like a nice hug to lull you to sleep." -rw9331

A Superman Bathrobe Will Keep You Warm At Night

"A Superman bathrobe with a cape attached. If I'm gonna be forever alone, might as well be Superman." -TheY2MProblem
Buy Now

This Sunrise Alarm Clock Is The Cure For Chronic Oversleepers

"My best friend has been late to work EVERY. SINGLE. DAY. for the past 6 years. The last time I was at his house, he was so excited because he got one of these sunrise alarm clocks, and he mounted it above the head of his bed. On Monday, for the first time in my friendship with this guy, he beat me to work. I don't know how he still has a job after being late for so long, but I'm proud of him. 5 stars." -Mc_High_Ver
Buy Now

"I also LOVE my KitchenAid stand mixer!!!!! The biggest game changer for me was getting the paddle with the flexible silicone fin edges that scrape the sides of the bowl clean for you as it mixes." -RhetoricalGirl
Buy Now

"All my friends and family gave me so much sh*t when I spent 500 bucks on a pair of Red Wings. I wear them damn near everyday and they still have tread on them. Lasted 6 years so far." -deadwire
Buy Now

"I bought an eight outlet power strip with surge protectors and 4 usb charger plug ins built into the power strip. I have everything on my entertainment stand all plugged in and a phone charger that reaches from there all the way to the couch." -patches402
Buy Now

"Years ago my dad bought a plastic severed hand as a Halloween prop. Every year we stick that hand in different places, hanging from the stove, the trunk of our car, under the front porch, basically anywhere we wanted. I even tossed it at him once or twice when he asked for a hand (just like Buzz did to Woody in Toy Story).

Hands down, one of the best purchases he's ever made." -ToaMexx

These Hair Trimmers Will Save You Thousands

As a guy who wears closely trimmed hair, they've probably saved me thousands on haircuts over the years.

Best ROI of any product I've ever purchased." -ToaMexx

Apparently Breathe Right Strips Give You A Super Sniffer

"I tried a Breathe Right Strip once when I was congested and went for a drive with it on. This sounds stupid as hell but I swear to God I smelled things I never smelled before. I drove by a field and could smell the dirt / earth. It was awesome." -deadrobins
Buy Now

"4 inch memory foam mattress topper. Got my first one for the dorms and have had one since because I am still too broke to invest in a decent bed." -HappyOpal
Buy Now

"I cooked a frozen solid, bone-in whole pork shoulder in about 2 hours [in an Instant Pot]. That shit would take days in a crockpot." -DrunkElves
Buy Now

A Dashcam Captures Some Wild Shenanigans

"For $100 or less, a dashcam can avoid thousands of dollars of potential insurance issues; plus, it can capture some really interesting video. (I captured a moose running across an urban highway in my small city just days after installing mine)." -DrunkElves
Buy Now

"Bluetooth headphones/earphones! I can walk around the house and do chores without getting all caught up in the wires." -eightdaysaweek_
Buy Now

Blackout Blinds To Make Your Room A Bat Cave

"Blackout blinds. Room is nice and cool in the summer and the darkness has lead to the best sleep I've had in my life as well." -drayd
Buy Now

A Fancy Humidifier For The Royal Treatment

"A humidifier for my bedroom. I sleep like a princess now." -coffeenkink
Buy Now

"The sound of everything being muted when you first turn Bose QuietComfort Headphones on is probably in my top 10 sounds." -Cpt_squishy
Buy Now

This WaterPik Takes The Work Out Of Flossing

"The feeling of easily dislodging bits of food from between my teeth is pretty great. My wife loves it so much we even got a travel WaterPik." -psylent
Buy Now

A Fitbit Keeps You On Track

"Definitely my Fitbit. My mom would always say "you're in college you walk constantly just eat what you want" and I didn't understand why I was putting on weight. Turns out I was walking about 2k steps daily while on a college diet. Totally changed my perspective on how active I really was." -booboo_keys
Buy Now

This Stuffed Hedgehog Makes Everything All Right

"When I was going through a really nasty breakup, I bought myself a stuffed animal to cuddle at night. I know it’s kind of mundane and stupid, but it really did help me find some strength in my heartbreak." -sadfaces
Buy Now

"Extra phone chargers. Saves so much time and stress knowing I’ll have one in my kitchen, car and bedroom without having to worry about my phone." -beard608
Buy Now

A Bidet For That Ultimate Clean Feeling

15 minute installation and one of the cleanest [butts] in the PNW." -NaturalisticPhallacy

This Aeropress Will Save You Mad Money

I was terrible at making coffee, would spend upwards of $10/day on Americanos and drip coffee (Starbucks and hipster places). Now I make better coffee at home and I don’t have to go anywhere.

5 years of ~200/mo savings and still going strong. Not bad for a little plastic tube!" -khug

"We get our meat from a friend who raises it and vacuum seal everything. We never have to throw any freezer burnt meat away. Best $70 we could have spent." -chungen91
Buy Now

"My Brita jug. Use it every day multiple times a day. The biggest advantage for me is not that the water is cleaner, but that its colder because I can keep it in the fridge. Tap water is never cold enough." -trthaw2
Buy Now

A Ninendo Switch Could Save Your Life

"My Nintendo Switch. I was having a really hard time that winter when it first came out, and having the Legend of Zelda to look forward to and escape into honestly saved my life in so many ways. Never underestimate the power of simple fun to make a real difference in your own life and mental health." -HannahLillian
Buy Now

This Rechargeable Massager Will Light Up Your Life

"My fiancé and I got the Mona II, and it definitely gets to see the sun enough for some serious Vitamin D.

"Microwaveable travel mug. I keep an assortment of tea bags and a vial of honey on me at all times. Every place of business I've ever been in has a water fountain and a microwave. I have never paid for coffee ever since." -reginaphilange15

A Heated Cat Bed Is Purrfect For Your Elderly Feline Friend

I’ve never seen him love something so much. He spends probably twelve hours a day in it. Also when he gets agitated over something weird you put him in it and he almost immediately calms down." -lalaen

This Professional Towel Warmer Is Coziness To The Nth Degree

"A towel warmer. Not the kind with the bars that you drape a towel over. The towel spa you put your towel in before and while you shower so when you get out of the shower you have a piping hot water towel to wrap around you. Mmmmm. Warmy goodness." -gabberella24
Buy Now

A Vitamix Blender Is Totally #WorthIt

"My Vitamix blender. Expensive...but worth every penny." -gabberella24
Buy Now

"A garlic press. <$10. Before, I had to peel and mince garlic, get my fingers all sticky... now the garlic press does it in 3 seconds. It even simultaneously peels it. 10/10 it's basically black magic." -dingusreviews
Buy Now

A Weighted Blanket So You Sleep Like A Baby

"For $50 I bought a Serta cool gel memory foam pillow. It's been kicking around for at least 6 years now and it's still as comfy as day 1. A good pillow is worth the investment." -MyNameIsSkittles
Buy Now