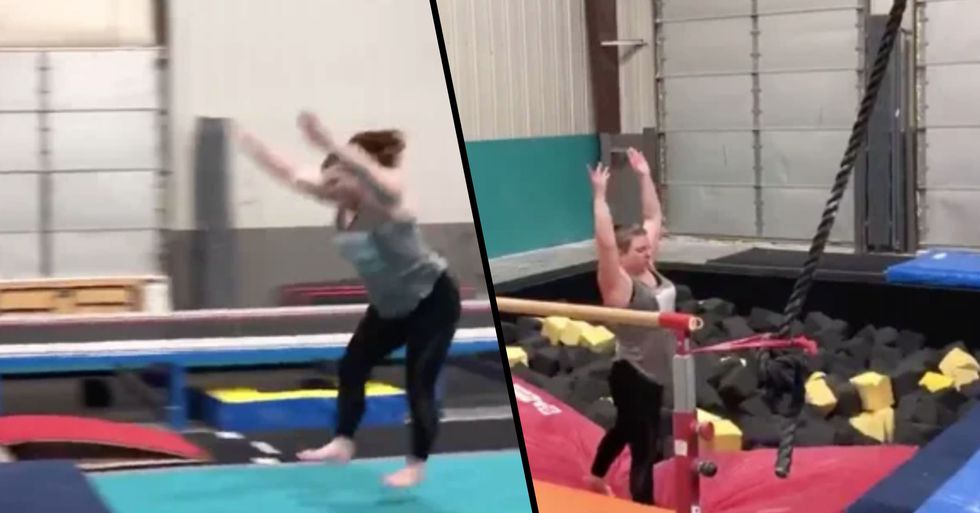 There is always a risk that comes with getting involved in sports... From bruises to serious injuries, and in some cases, even death.

All gymnasts can relate to the fact that some stunts are just too dangerous, but one mom has gone viral after she finally attempted a stunt many years later.

Gymnastics is truly an incredible sport.

The way that gymnasts can throw themselves through the air and land so gracefully is honestly mesmerizing.

Who has heard of Simone Biles?

Our American champion is currently being considered as one of the greatest gymnasts of all time and it isn't hard to see why.

Alongside the world champions...

There are many gymnasts out there who take part in the sport for fun, especially a lot of children.

But as it is with any sport, gymnastics comes with some major risks.

Putting your entire body on the line is a difficult thing to do, especially when there's room for things to go wrong in a matter of seconds.

And not to state the obvious...

But hurling your body through the air at immense heights and fast speeds isn't always a great idea.

That's why gymnasts train for years before they start competing.

Being able to do complicated routines, safely, is an important part of the sport. We all know from watching competitors in action, that it's a difficult sport that requires a lot of dedication.

However, no matter how long you train for, things don't always go to plan.

Last year, a senior gymnast at Auburn University broke both her legs in a gruesome accident. While performing her floor routine, Samantha Cerio left audiences shocked as she landed awkwardly on her legs, before falling to the ground.

She was carted off my medical staff to seek help, but things weren't looking good...

Despite receiving treatment, Cerio announced that she'd have to retire from the sport after eighteen years of competing.

In a heartfelt post, she let her fans know about her decision:

"Friday night was my final night as a gymnast. After 18 years I am hanging up my grips and leaving the chalk behind. I couldn’t be prouder of the person that gymnastics has made me become." "It’s taught me hard work, humility, integrity, and dedication, just to name a few. It’s given me challenges and roadblocks that I would have never imagined that have tested who I am as a person. It may not have ended the way I had planned, but nothing ever goes as planned."

Samantha's accident is just a prime example of what can happen in a split few seconds...

And this is more than enough to put off a gymnast for life.

Nicole, who is now thirty-seven and a mom of 2, used to do gymnastics when she was a teenager.

She is now an English teacher...

But Nicole has a past rich in gymnastics. Speaking to BuzzFeed News, she said, "I was a pretty mediocre competitive gymnast from about ages 10-15. I loved the sport but I started training late by gymnastics standards and I’m not really built like a gymnast."

Even though she gradually stopped competing in the sport...

Nicole has always loved gymnastics and she has followed it ever since.

I don't usually post things about my kid without at least warning her first, but I'm just so proud of her every day. https://t.co/1wPGNRMcEd
— Nicole Clemens (@Nicole Clemens)1565302208.0

"I put my daughter in a recreational gymnastics class to just keep her busy. She took off in the sport and is now a level 9 out of 10. But that means my life has been consumed by gymnastics in new ways," she said.

Because there's no competitive side, Nicole is simply having fun...

"I got into the class with another mom friend initially a few years ago. We were both parents of gymnasts and former gymnasts ourselves," Nicole explained. "I've stuck with it for over a year now because it's just fun. There's no pressure, no anxiety, just reliving the glory days I never really had and learning to fly. That's the best part. The simultaneous in-control and out-of-control moment where I get to show gravity who is the boss."

Nicole executed a stunt recently that she was too afraid to attempt all of them years ago...

She explained, “It was one of the skills that kept me from moving up to the next level."

And it was uploaded to Twitter with the caption, "In the spirit of being freaking proud of myself and also knowing I'm about to be fat-shamed on the internet, I present to you me, a 38-year-old mom and teacher, doing a thing I was afraid to do when I was a 14-year-old gymnast."

She didn't expect the video to get any attention,

Nicole said, "Of all the random stuff I've tweeted over the years, this is not the thing I would have bet on. But I think the world is a hard and scary place and people are afraid to be vulnerable by putting themselves out there like this. But when you do, people want to support you, because, really, I’ve already kind of roasted myself anyway, so what did I have to lose? They want to cheer for regular people."

Her bravery resulted in floods of support...

@Nicolemens I am an internet stranger and frankly, you are #goals and a proper inspiration. I hope the kids you teach see this!
— Giulietta Driver (@Giulietta Driver)1582028779.0

And strangers from all around the world praised the mom of embracing her passions in life, regardless of what others may say.

"People do cool stuff all the time and don't even realize how cool it is. We should share more of that stuff," Nicole said.

Keep scrolling to watch Simone Biles perform a flip that no other gymnast has ever landed before...