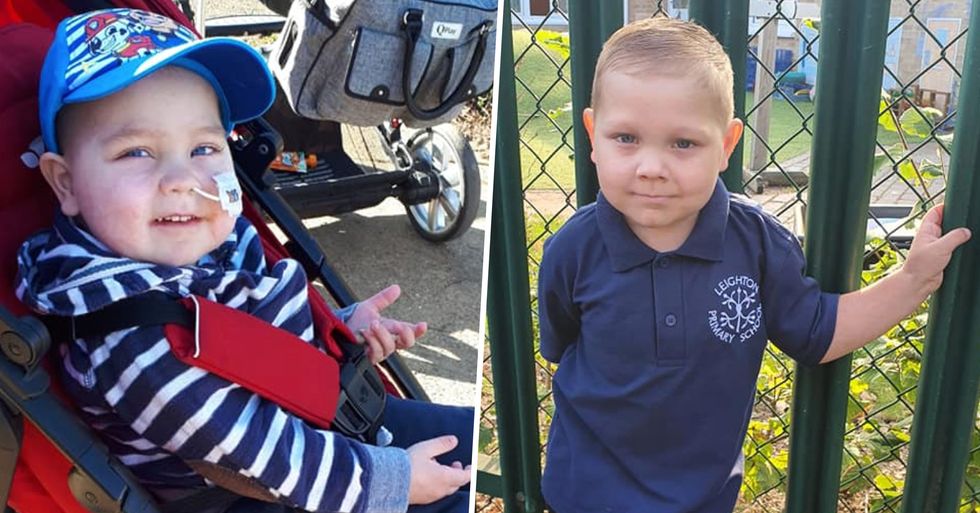 A 4-year-old boy who has twice beaten leukemia and survived a transplant operation has just had his first day at school!

This is a true miracle...

Josh Stockhill has been through far more than many people will experience in a lifetime...

But after battling leukemia twice and surving a brain marrow transplant...

Little Josh has just had his first day at school!

Now, you will all know that, out of all the illnesses in the world, cancer is by far one of the most devastating.

So, of course, whenever someone beats the disease...

A huge celebration is in order.

And this brings us back to the story of Josh Stockhill.

4-year-old Josh, who is from the United Kingdom, has already endured so much in his short life.

His mom, Kirsty, recently spoke out about his turbulent life.

Josh, who has 3 older brothers and 1 younger brother, was first diagnosed before he was even old enough to start crawling. "We started noticing him coming out in bruising, which we thought was a bit strange as he wasn't even moving about at that point. We took him to the doctor, who sent us to Peterborough City Hospital for a blood test," Kirsty explained.

Kirsty and Josh's dad, Craig, had no idea what was coming...

"They told us they suspected leukemia, and they sent us to Addenbrookes Hospital at 8 pm that same evening, where we were told he had infantile acute lymphoblastic leukemia. We were devastated. We were absolutely floored by it. We never, ever thought it would be that."

Josh began chemotherapy treatment - which was supposed to last an initial 6 months, followed by a further eighteen months of less intensive treatment at home.

But during just the first month of chemo, Josh developed sepsis and ended up in intensive care. Kirsty recalled, "We were told that there was a 50/50 chance he would make it through the night. We almost lost him at nine months old."

Then, in May 2018, Kirsty and Craig were given the devastating news that his leukemia had returned and he needed a brain marrow transplant to survive.

Even though Josh's big brothers weren't a match for his brain marrow transplant, thankfully, Addenbrooke's Hospital in Cambridge found a ten out of ten match for a donation for Josh - coming from a patient in Spain.

Since the life-threatening transplant, Josh has started to regain his strength and cheeky character.

Kirsty said, "We mark every milestone, and with each one he is getting better and better. He will be on medication for life, and under consultation for life, because of how severe his leukemia was. We don't know what the future holds for him."

Josh continued to fight through his recovery...

And on Wednesday this week, he started his first day of school!

This was an incredibly emotional moment for the family.

"I got so emotional when he tried the uniform on. We have seen so many children who have not made it through our journey - we are so thankful Josh has this chance," Kirsty explained. "He went in on Tuesday to see his new classroom and meet his teacher, and he's so excited to start properly."

Kirsty is now speaking out during Childhood Cancer Awareness Month...

And is urging people to donate blood when they can as that is what ultimately saved little Josh's life. "It was a cord blood donation from Spain that saved him. Some hospitals keep it, some don't, but it can be a real lifesaver. It is so, so important - if you ever get the chance to donate, please do."

Congratulations to Josh on this huge milestone!

Keep on scrolling to read about the dying bride whose final wish was to get married at Seaworld...