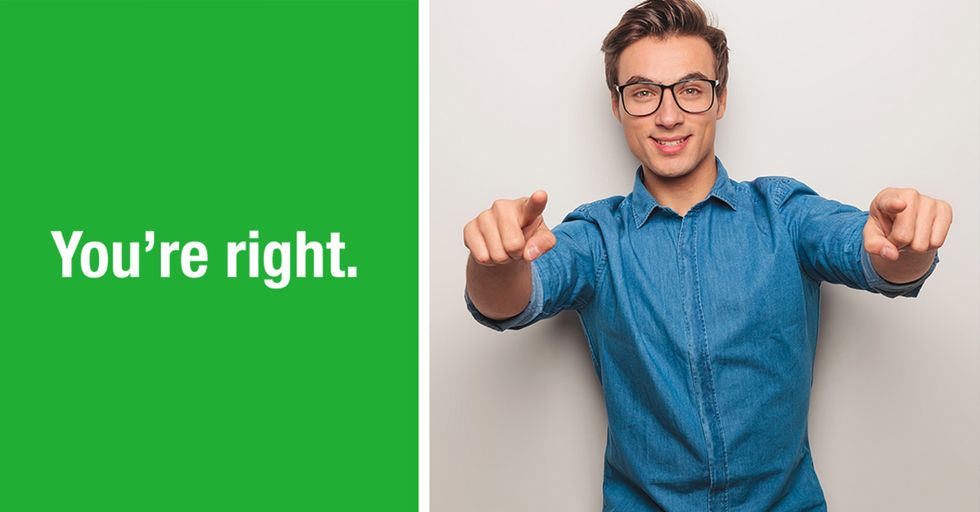 40 Things Women Want to Hear, But Never Do

Do women have unrealistic expectations when it comes to communication in a relationship?

I'm sure the answer to that depends on who you ask, but maybe the fact that a man's response would most likely consist of a shrug, whereas my girlfriends and I could discuss the subject for about three and a half hours, should tell you something.

You've probably heard this before, but generally women like to vent and be heard in conversations, while men just want to figure out how to "fix" whatever women are venting about (hey, don't argue with me — it's science)! That, along with about a million other differences between the sexes, can lead to a woman feeling like her partner's contribution to their conversations is...a little lacking.

So what does she want to hear? Here's a hint: it isn't always those classic three little words (although saying "I love you" is always nice). Women are every bit as practical as men are, so most of the time what I want to hear from my husband is a lot less romantic than some whispered sweet nothings — but would be just as appreciated. Here are forty things women would love to hear...but, probably never will.

For example, nothing beats the news that there's suddenly less laundry and more closet space!

Not to mention the reduced odds that I'd have to see that old AC/DC t-shirt he's had since high school.

Any indication that he's been listening to past convos gives me the warm fuzzies.

Bonus points if he knows about the "break room controversy" involving Brenda and the coffee machine. (But either way, BRENDA knows what the controversy is, don't you BRENDA?)

Flattery will get you nowhere, honey.

Oh no, wait, I meant everywhere, flattery will get you everywhere. Especially in the morning...assuming he can make compliments sound remotely believable at 5 AM.

Even better if that morning comes after a night of uninterrupted sleep.

Maybe he could throw this in for good measure:

You know, since I'm going to be wearing them anyway.

Though the same rules might not necessarily apply to what we want to hear about his OOTD.

This one would just be all kinds of yes.

When he's finished, maybe we can go to a flea market to pick up some mason jars and old wooden pallets! Don't worry, I have the wine corks covered...

Speaking of Pinterest project supplies, here's hoping he says this next:

All women are looking for here is a sincere apology.

And a promise that you'll never, ever evereverever do it again.

A simple little thank you goes a long way, too.

I don't know which part of this would be most exciting...

It feels good to know your partner has been paying attention to your life and cares about your feelings.

It also feels good when your partner agrees with you about how completely horrible Patty's comment was.

This would be a popular thing for ladies to hear, too:

Not because we need permission to spend our money however we damn well please! But because it would be pretty sweet of him to pretend he doesn't suspect we've already spent it.

Speaking of sweet, are there any sweeter words than these?

On the plus side, dads, nothing gets a mom in the mood like everyone staying the hell away from her for a while. Not that it would do my husband any good because I'd be asleep by the time he was finished with bedtime, but it's the thought that counts, right?

I guess maybe he'd have to resort to this.

But I can't even last through bedtime, I can't be expected to stay awake through an entire movie! Besides, I'd have very important Ryan Gosling-related dreams to get to.

Hearing about his celebrity crushes, though? That might be a mood killer.

Ah, that's more like it. Even though the next part of the conversation would probably be a feminist rant about how he has no right to judge Pam Anderson. What can we say? Women are complicated creatures.

Now, these are the kind of evening plans I'm talking about!

This certainly would be a nice gesture.

But frankly, most women aren't so sure they want their mother to stay for the entire summer, either. Unless it means three months of free childcare, in which case let's get that guest room ready!

If not, maybe it would be better to take your show on the road!

Or maybe just go with this instead.

Well, I suppose this would be nice to hear.

Though the joke would be on him, because there's no such thing as chocolate cream pie in my house that I didn't already eat.

After that, I think a light dinner is in order...

Though on second thought, if he's manning the grill instead of me cooking on the stove, then steak sounds perfect.

I wouldn't mind if he suggested something new and exciting for dinner conversation...

...or for our weekend plans.

If I thought he wouldn't grumble the whole time, I might hold out hope he'd say something like this.

But this would be a definite no-lose situation.

Really, I think what women want is for their partners to do is acknowledge what we want...

...preferably before they've been nagged about it 682 times.

Bonus if they want to spend time with us and we can knock out some of those nag-inducing (I mean FUN) household tasks!

Oh wait, we need friends...and a main squeeze who understands that.

Okay fine, I guess I can see why men sometimes get confused about what women want—hey, I warned you we were complicated! But we still have simple needs.

Sometimes what we want to hear should be pretty dang obvious.

Like when large, important purchases are being made and we have practical considerations like car seats to keep in mind...

But it's okay if you miss the mark sometimes, fellas.

Frankly, I'd rather go to the Superbowl.

We just want to feel connected with you, whether it's by sharing a common interest...

(Especially our need for ice cream.)

...knowing we're on the same page about important issues...

...or just being pampered.

We get it, guys. Women can be hard to read and even harder to talk to. Hopefully this list helps.

But if all else fails, you can always fall back on the two most appealing, sexiest words a woman truly longs to hear.

I mean, we already knew we were right. But it's nice when they admit it.