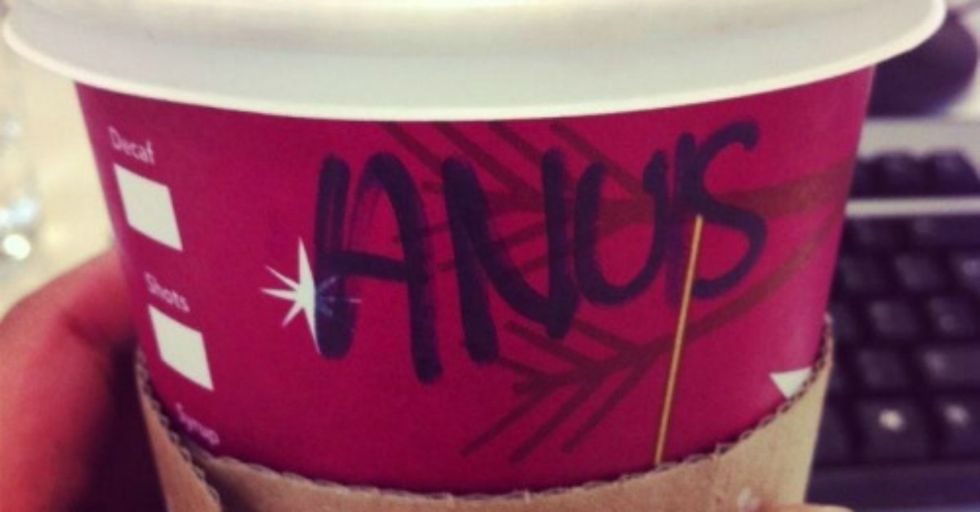 This is an all too common occurrence in Starbucks:

Only person waiting for a drink: "You mean Marvin?"

Barista: "Ah yeah, OK. They must have spelled it wrong."

Luckily for us, there's Starbucks Spelling, a whole Tumblr devoted to photos of Starbucks cups where they got the person's name oh so wrong. And it's oh so hilarious.

This wouldn't be so bad if the guy's name was Eric or even Erik or Derek. But it's not. It's Darren.

Unless this person pronounces Isaac like "Ick-ick," this is a horrible misspelling. Good thing the "Barista Promise" doesn't include spelling people's names right.

Margaux can be a tough name to spell. It could be Margo or Margot, even. But one thing's for sure: It's never Marabedefgh.

When Juanita said her name, this is what the barista heard: "Nsgndsajlgfakjlica!" Close enough?

It's a little-known fact that every Justin actually wishes he was a Jasitan. It's much sassier.

This was supposed to be Trudy, but it looks like Gale. Gale and Trudy sounds like a pretty promising daytime talk show, though, so all is forgiven.

Poor Corynn. People never spell her name right. It's always Corrine, or in this case, Leoasasoacnmsdnaoaiin.

Ha ha. Very funny. Except Kat had no idea this referred to her, and the barista was stuck meowing at people for eleven minutes.

Too bad Linda's already been Linda for 53 years. Lennathe has a nice ring to it.

Twice. They tried twice. They picked actual names that were nowhere close to Daryl. I can't tell if that's better or worse than just writing gobbledygook.

Well, they didn't get Patricia right. At all. But they totally botched her name, so that part's correct.

And from this day forward, Jen decided to change her name to Lem. She would be known as Lem until her dying day.

The barista was so confident for the first half of Lucy's name. It was still wrong, but at least it looked like English.

This isn't actually a misspelling of Brooke's name. This is her financial state after ordering that six-dollar frappuccino.

DON'T DRINK IT. We have to get this semen sample back tot he lab, stat.

Jude is in no way giving a thumbs down to Jews. It's just...so close to her name...and yet, so so far.

Oh, this barista knew perfectly well that this man's name is Liam. But he was trying to tell Liam something important, namely, that he's in the Matrix.

This barista did the smart thing and gave up on writing the name all together. Remarkably, this little guy looks like a Francisco. Don't you think?

Poor Phoebe. She's nothing to be scared of. We should be terrified of these baristas who are appallingly bad at spelling names, however.

Maureen did try to order a "large" instead of a "venti," but this is a little harsh. She's a brain surgeon, for Pete's sake.

Now this is just rude. But it's also what this coffee made Chad do about 30 minutes later.

Kristy just thought she was getting an iced coffee. She didn't know it came with an entry into the Hunger Games. So many regrets. You think there's a Starbucks in the arena? Otherwise, Kristy's just going to die out there without caffeine.

Annie was already having a rough day. She didn't need to be put down by her barista. You're not just any Annie, Annie. You're a very special Annie.

This brings up so many questions. Is Dale Mr. Douaoe? If not, who is that mystery man? Is Mr. Douaoe his real name? Are we actually in the Hunger Games? Sorry, still distracted by that Primrose Everdeen cup.

Not many people know this, but the full, uncensored lines from Airplane are actually as follows: "Surely, you can't be serious." "I am serious. And don't call me Shirley. Call me 'Cheerly!' I like it better."

This was the barista's way of telling Andie she's going to be an aunt. Sure, it was a little weird that a stranger from the coffee shop broke the news, but at least it was memorable.

Shane and Shubh sound like two best friends. Shane's an otter and Shubh is a turtle. They go on adventures where learn about each other's species and all different kinds of animals. Coming this fall on Nick, Jr.

This was a not-so-subtle offer for best friendship from the barista. What can she say? She liked Betsy's style.

There are three options here:

Yvonne and Caitlin are two coworkers slash friends. Evan and Kitten are their bank-robbing alter egos.

"Hi, my name is Robin. I'm with 22 Words, and I have a few questions for the barista who wrote out this cup. "One: Have you ever met a person named Candles? "Two: Did you really think this person's name was Candles? "Three: Is Candles a good name for a dog? It's kind of growing on me."

Maybe the barista didn't catch Mel's name and instead wrote a description of him? Even if that's the case, it's not a very specific description.

This is painful. This barista tried so hard and still couldn't get it right. At least she didn't rest on her laurels. Boom. Joke. Thank you.

This was so far from Emma's name that she didn't claim the drink when the barista shouted, "Nemo! Nemo! Nemo!" They spent the rest of the day trying to find Nemo (not nearly as thrilling as the movie).

Ann-Louise. Ann. Louise. ANN. LOUISE. This barista needs to take a seat and butt out of the name game for a while.