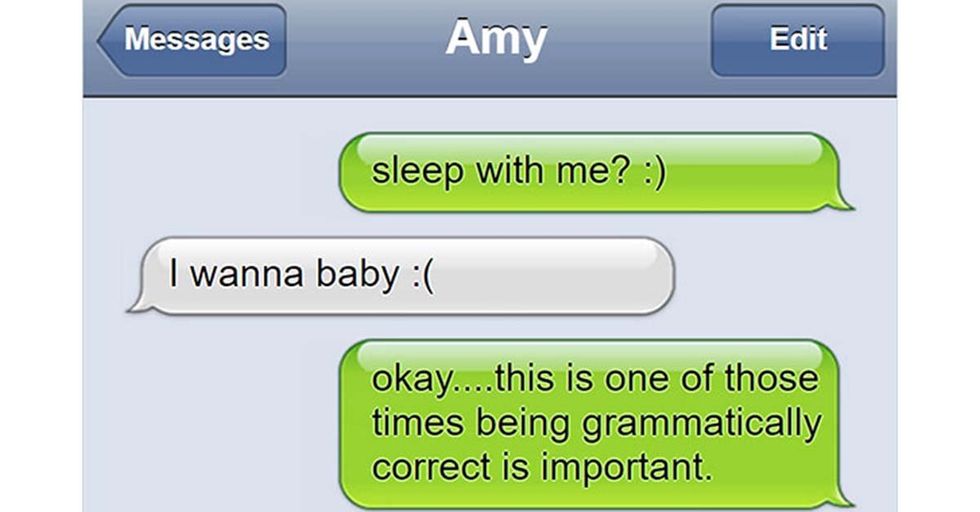 40 Times People Were Absolutely Put to Shame for Terrible Grammar

You would think with texting, social media, and email all becoming more popular that people would work a little harder to make sure their grammar and English get their point across. But unfortunately that isn't the case.

Here are 40 times the much needed Grammar Police stepped in to save the day.

That just doesn't seem to be happening. Sometimes, people are just too lazy to spell things the right way.

Other times people, bless them, are trying their best but end up WAY off the mark. Either way, you can have your faith in the English language restored by the grammar police, running around on social media, letting users know that what they just wrote makes no sense at all. Or means something they DEFINITELY didn't intend. Take a look at some hilarious instances of grammar gone wild.

They say that even a blind squirrel finds a nut once in a while, but not this one. So close, yet so far.

That sounds like a pretty terrible day to me but to each their own. Oh, he meant THAN... One letter changes everything folks!

You're a giant plank of wood.

Oh man, it'd be great to see where the conversation went after that. I can't imagine a very positive reaction to "I hope you don't breed"...

Not when you spell it like that, there isn't.

Normally there is though. Sorry honey, I think you meant "there is no 'I' in team." Close but no cucumber. This next one has us rolling..

Well, maybe this wasn't the right time to correct someone.

Or it was the absolute perfect time, it depends on your perspective I guess. If she laughed at that, she's probably a keeper.

I wish I could go around correcting people's grammar for money whether they asked me to or not. That sounds like the life, right there.

Act and write like your teacher is always watching you.

Oof. This might be the only thing harsher than that teacher's burn. Nothing like poking at some open wounds!

When someone grammar checks your entire family, it might be time to re-evaluate your life. Or at least who your Facebook friends are. Check out the next page for more hilarious grammar fails...

"Wiv" is not an acceptable substitute.

Whoever is behind this wrong number sure didn't help things for the intended recipient, but she schooled the sender regardless. We're surprised the sender didn't call her "dead meet"...

That's the cost of doing business.

Sometimes it might not be worth it to correct someone. Especially if they're capable enough to turn it around on you.

Um. Commas people, commas. They make a bigger difference than you realize.

Not into older men, eh?

The comma strikes back. Or rather, the lack of comma. The difference between "Let's eat, grandma!" and "Let's eat grandma!" is staggering.

Some shampoo will get that smell right out.

Gross... and we also hope his colon isn't everywhere. That sounds like a pretty serious medical issue. We're still not over this next one...

We assume (hope?) that she meant it was her and her parent's garden, but that phrasing really makes you wonder... No additives at least?

Watching your grandpa do that DOES sound unpleasant.

Oh, Robby. Where do we begin here? We'll just gloss past the old man sex and focus on that second part. Coma, comma... Not the same thing there, bud. Though a coma might also help.

Maybe she meant she was going to sign up for an actual collage class? As in, a class where people literally make collages? Maybe? No?

Can one unfriend themselves?

And it's probably safe to say that Tama got himself unfriended for that, but man that joke was worth it. We appreciate your sacrifice, Tama.

Can you really put a price on your body like that?

And if you can, you can certainly do better than $150, I would think. Don't sell yourself short like that! This next one really proves that punctuation is key...

You know you can just put the punctuation mark there. Needlessly confusing.

You don't have to spell out every punctuation mark. Or maybe use some of them. There are several things wrong with this.

I don't think I want to go see that, thanks though. And maybe next time be a little more subtle about it and don't post your murderous affairs on Facebook...

No, somehow I don't think they realize that. The commenter also spelled realize wrong, but this post isn't about the comment. We'll let that slide.

When a post is this bad, it's best to just walk away...

It must suck to get owned on your own Facebook post. But be smarter and that won't happen I guess.

I hear tourism is booming down in Labia. It'd be in America's best interest to leave them alone, I think.

Who are your parents again? And they did what with Mr. Levitt?

I stick with pig bacon.

"2 people like this" That catches my attention more than anything else. At least he has supporters?

Amy, you can't scare him like that. Unless that is what you meant, but that seems like a strange time to mention it.

If you're gonna speak out on grammar nazis, you might want to spell "grammar" properly.

Right... "Autocorrect." He should've played it off like he misspelled it on purpose for the joke. At least he owned up to it, sort of?

Is this person having a stroke?

Also, don't tell your dad how to dress. He doesn't care. Dad's don't care how they look anymore, their will to live has already been sucked out by their children.

What a trainwreck that was. It just kept going and going. That last part is fine though, she got "says" right at least!

Maybe macrame is more your speed?

But it's true, you don't wanna be a bumb. I think..? Unless that's short for bumblebee, in which case I'd probably rather be a bumblebee than a human.

He cobbled together one hell of an oath!

Hippocrates and Socrates were BFFs. You can look it up too, everyone knows.

NOPE NOPE NOPE. Yet another example of why commas are your best friend. This next one is hilarious...

"A women" almost sounds like a group of something, like how a bunch of crows is called "a murder of crows." But it isnt...

Hopefully, no one is bored doing that, but we all have our strengths and weaknesses in life I guess.

If it takes longer to decode than the time that was saved with the abbreviations, then the sender is the jerk.

Doesn't matter how it got there...

English is the worst language ever. One or two missing letters and your whole sentence is just totally ruined.

I hope we've all learned a valuable lesson today. Specifically one about commas and why we should always use them.