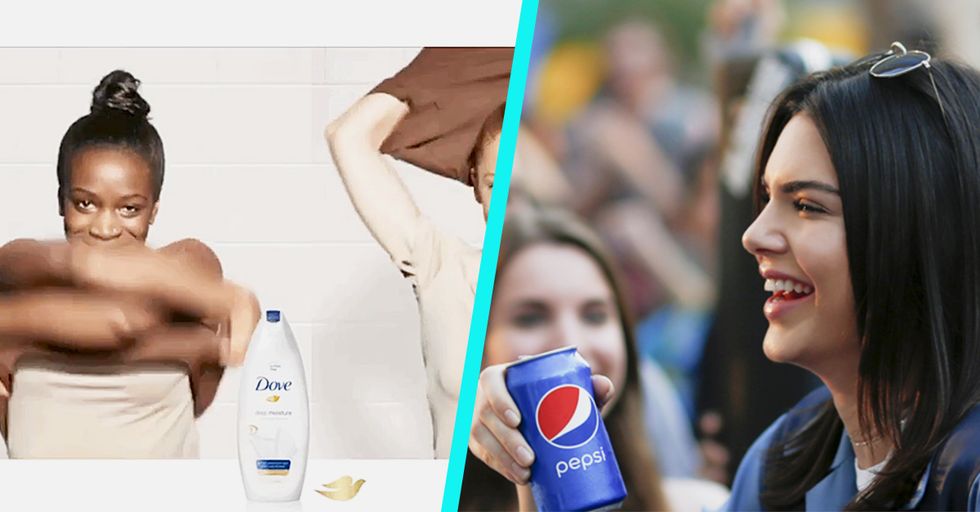 When advertising is done right, it gives you all the feels and inspires you to do something, anything, that you otherwise wouldn't have done. The influence it incites could be as simple as you choosing a cheeseburger at lunch or it could plant a seed that will ultimately lead you toward making a major change in your life.

A cheesy Foldger's coffee commercial makes you call your mom. A commercial for a rehabilitation center leads an alcoholic to make a phone call. A Kay's Valentine's Day Commercial makes you realize your boyfriend is a dick and you decide to leave him. An insurance commercial turned humanitarian musical sticks in your mind and when you see your elderly neighbor struggling with her groceries later that day, you run over to help. Call them small things, but advertising can be powerful.

When advertising completely misses the mark it can also inspire you to do something that you otherwise wouldn't have done. Like, punch your television. Or never patronize a brand or company again. It can remind you that we live in a flawed society that still has work to do. Whether it's due to lack of awareness, ignorance, or straight up racism, advertising can both reveal and perpetuate the deeply-rooted flaws in our society.

Without saying it out loud, these advertisements manage to say it all, and show us exactly how far we have to go.

Pepsi attempts to solve the history of America's problems but just pisses everyone off instead.

Pepsi's commercial starring Kardashian sister and supermodel, Kendall Jenner, aimed to promote peace during the height of the Black Lives Matter movement, but instead, the company grossly demeaned and trivialized the complex and deep-rooted issues that the movement seeks to shed light on.

The Pepsi ad wasn't just tone-deaf. It was deaf, dumb, and blind.

Pepsi's ad suggested to many viewers that decades of racism and police brutality could be cured by a pretty girl handing a cop a beverage. The meant-to-be feel-good ad didn't just fail to capture the depth of current cultural dynamics; it perpetuated the problem. Putting a bow on it don't make it pretty, Pepsi. To the contrary, it undermines the blood, sweat, and tears of those fighting for real solutions to our real problems.

There was an uncomfortable moment of silence from Kendall Jenner amidst the controversy. While Americans were passionately debating Pepsi's epic downplaying of our seriously flawed culture on social media, Kendall was MIA. Not only did Kendall fail to take a stance on the heated issue, she didn't publicly acknowledge the controversy at all. That's not awkward.

Come on, Pepsi. You've been around for awhile. You should know by now how to handle a P.R. firestorm. Even, I know. Remove the ad, apologize immediately, and begin damage control by redrawing consumer's attention to your product with an indisputably noncontroversial red herring project. Grandmas are always good. Go give some Pepsis to grandmas. Film it. You're welcome. But no, Pepsi initially refused to accept their losses and alternatively opted to go down in flames rather than simply apologize.

Pepsi finally pulls its head out of the sand and apologizes.

After originally defending the ad, calling it a "peace march" (that's great, Pepsi, and also totally beside the point), Pepsi released a statement the following day, stating:

Pepsi was trying to project a global message of unity, peace, and understanding. Clearly we missed the mark and we apologize. We did not intend to make light of any serious issue. We are pulling the content and halting any further rollout. We also apologize for putting Kendall Jenner in this position.

Jenner finally speaks up too, but does she really get it?

When it FINALLY came time for Jenner to confront the controversy, the hyper-PR-focused dynasty didn't hesitate to choose the premiere episode of their show, "Keeping Up with the Kardashians," as the perfect platform. In an episode of their show, Jenner cries in a solo interview, saying, "I felt so f**king stupid." Jenner continued to explain that the idea that she "would offend other people or hurt other people was definitely not the intent. And that's what got [her] the most." In the episode, Kendall also admits to Kim, "[I have] no idea how I'm going to bounce back from it." Well, Kendall, that's kind of the point. It's not about you. It's not about Pepsi. It's not about ALL lives mattering. It's about acknowledging a real problem and offering a real solution, not a can of soda.

H&M sparks controversy with ad of a young black boy in "cutest monkey in the jungle" sweatshirt.

While Pepsi's epic failure ad threw a filter on society's selfie and hashtagged it #nofilter #iwokeuplikethis, H&M's oblivious ad reveals a whole 'notha level of ignorance in our country.

Both sides of the table speak up on H&M racism controversy.

Some were quick to defend the ad, arguing that if you see something racially disparaging in the innocent image, you're actually the racist and your perspective is the problem.

But others were just a quick to fire back, arguing two points in response. First of all, if you don't see racial undertones, you're not looking. And secondly, by closing your eyes to the realities of racism in our country, you perpetuate it.

Rapper Talib Kweli commented on the controversy in an interview with Variety:

Things like that happen because we don't understand the history of racism in the world and that's what leads people, in high positions, to be tone deaf. There's probably a lot of ignorant, mediocre motherf---ers at H&M with high positions. But because of the status quo of how racism works, they get put in these positions and so these people are not inherently malicious. They’re just racially ignorant about the history of racism in the world. The idea of black people being compared to monkeys and stuff, they're young white people they don't have to deal with that in their life at all.

The media uproar continues for weeks, prompting celebrities to speak out and affiliates to jump ship.

Despite collaborating in the past with H&M, when it came to future projects with the company, The Weeknd was out.
Diddy, Snoop, and Lebron James weren't having it either, and called H&M out on social media for the thoughtless oversight. Lebron shared his thoughts on Instagram, publicly telling the company, "u got us all wrong! And we ain't going for it! Straight up! "

H&M responds to the backlash by pulling ad and apologizing for the misstep.

After the continued controversy, H&M pulled the ad and issued an apology, stating:

“We sincerely apologize for offending people with this image of a printed hooded top. The image has been removed from all online channels and the product will not be for sale in the United States. We believe in diversity and inclusion in all that we do and will be reviewing all our internal policies accordingly to avoid any future issues.

Despite H&M's damage control efforts, the outrage goes global as protests erupt in South Africa over the company's massive blunder.

Backlash over the insensitive ad spread beyond social media and celebrity commentary, eventually leading to protests in South Africa. The protests escalated to riots as activists trashed stores in Johannesburg, South Africa. The South African Police Service issued an update regarding the ongoing incidents:

Several incidents of protests at H&M stores around the province have been reported. At the East Rand Mall the protesters managed to enter the shop & stole several items. #SAPS members had to intervene and dispersed the group of protesters by firing rubber bullets. SW

In response to the public outrage over their ad, H&M appoints a "global leader" to address "diversity and inclusiveness" within the brand and their messaging. While the company repeatedly apologized, they fell a bit short when it came to taking full accountability. The company stated, “We stress that our wonderful store staff had nothing to do with our poorly judged product and image." Nothing to do with it? Hmm. This company really knows how to fuel the fire.

There are just no words. While Pepsi trivialized racism and H&M turned a blind eye to it, Dove seems to be just flat out promoting it. The reaction to Dove's controversial ad was interesting, as people seemed to go straight past anger and outrage into awe and utter disbelief.

On what planet is this Ad not racist?

To think of the process this company went through to complete this ad is astounding. The pitching, storyboards, casting, wardrobe, and filming all apparently took place without any red flags being raised within the company.
The extra sad part is, Dove is a company that prides itself on empowering women through its advertising. Not so much Dove, not so much.

While Nivea claimed to be promoting women's deodorant in the ad, many felt the slogan was better suited for white supremacists. The public's response to the ad was fast and furious.

People began to point out that Nivea has a history of "oversights" when it comes to racial nuances in its advertising. Only 6 years prior to their "White is Purity" campaign, Nivea was in hot water for an ad that featured a black man and stated, "re-civilize yourself."

Yet Nivea does not seem to learn from their advertising mistakes, or perhaps, they weren't mistakes at all.

At the end of the day, Nivea knows that they have a market for their skin lightening product. Their target audience is a faction of women, in Africa, and everywhere, who have been systematically raised to believe that the color of their skin is flawed, and if only it were lighter, they would be better, prettier, more successful, or more accepted.

The company responded to the public's outcry over their skin lightening cream, stating:

We recognise the concerns raised by some consumers regarding a Nivea product communication in Ghana and take them very seriously. Our intention is never to offend our consumers. As a global company, Beiersdorf offers a wide range of products that are aimed to address the diverse skin care needs of our consumers around the world. We acknowledge every consumer’s right to choose products according to their personal preferences, and we are guided by that to provide them with high-quality skin care product choices.

In other words, profits prevail.

It's one thing to be dismissive, ignorant, or just plain stupid in advertising. But it's entirely another to consciously perpetuate and profit from racist stereotypes and the insecurities they breed in women everywhere, every day.

Major companies must constantly consider the current cultural climate of our country when promoting their products.

Some might say I'm looking too closely at these ads. That perhaps they're in poor taste but they're not intentionally causing harm. Yet, we know that from childhood, what we learn is what we see. Good intentions are no longer an acceptable excuse for these types of advertising oversights. It's advertising's repetition, subtlety, and suggestion that shapes our perceptions of ourselves and others. It's time major companies like Pepsi, H&M, Dove, and Nivea begin to proactively practice cultural awareness and channel the power they hold over its path in an ethically responsible and morally motivated manner.