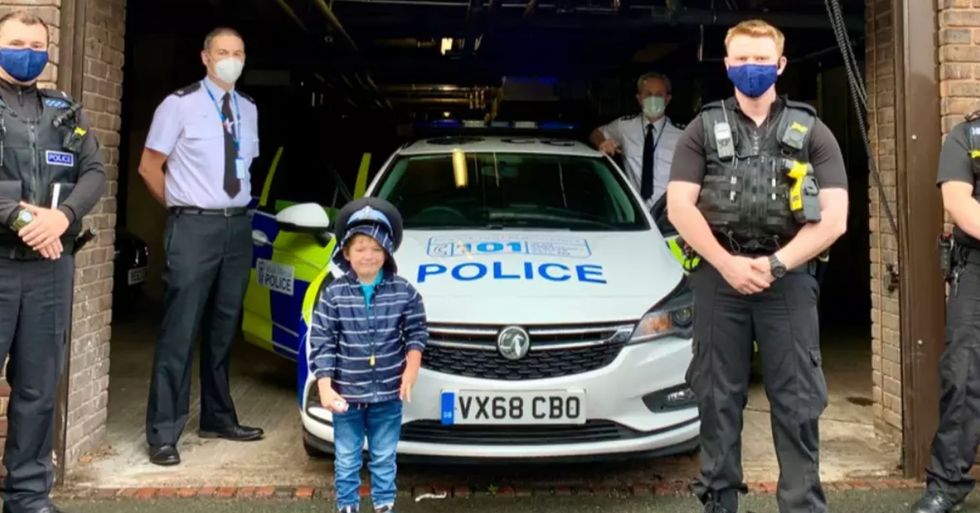 A heroic 5-year-old boy saved his mom's life after she collapsed by ringing the number on the side of his toy ambulance.

What a brave little man!

Being a parent is one of life's many joys...

But the responsibility is overwhelming.

Us parents need to ensure that our children are safe at all times...

And if they fall unwell, it is our responsibility to make sure they receive the appropriate medical care.

But what about if we're the ones who suddenly fall unwell?

What are our children supposed to do?

Not all children know what to do in an emergency...

And seeing a parent suddenly fall critically unwell is confusing and traumatizing for them, leading them to panic and not know how to deal with the situation properly.

But one little boy in the U.K dealt with his mom's sudden illness incredibly well...

And his actions ended up saving her life.

5-year-old Josh lives in Shropshire in the United Kingdom...

And he lives at home with his mom and his younger brother... making him the man of the house!

His mom is diabetic...

And last month, the worst possible thing happened when she slipped into a diabetic coma.

This must have been a horrible sight for poor Josh and his brother...

But rather than panicking, little Josh decided to spring into action to help his mom.

The little boy noticed a phone number on the side of his toy ambulance.

Josh dialed 112 and was connected to a police communications operator who was able to help him and his mom.

It wasn't long before officers arrived at Josh's home and found him and his younger brother, along with their mom - who was still lying unconscious on the floor.

Paramedics were then thankfully able to treat the unconscious mom...

And this is all thanks to the heroic actions of little Josh!

He said, "This was an incredible thing for Josh to do, his quick thinking saw him ring the number on his toy ambulance as he was worried about his mom."

Josh was very cooperative with the police officers...

"He was very brave and stayed on the line while we were able to get to the family's home and make sure his mum got medical assistance."

And as a reward for his selfless behavior...

Josh was able to spend the full day with the police officers at the West Mercia Police Station!

His heroic story has since gone viral...

And people have been sending their praises in for the little boy.

For more heroic stories, keep on scrolling to learn about the eleven-year-old who jumped off a pier to save a drowning toddler...