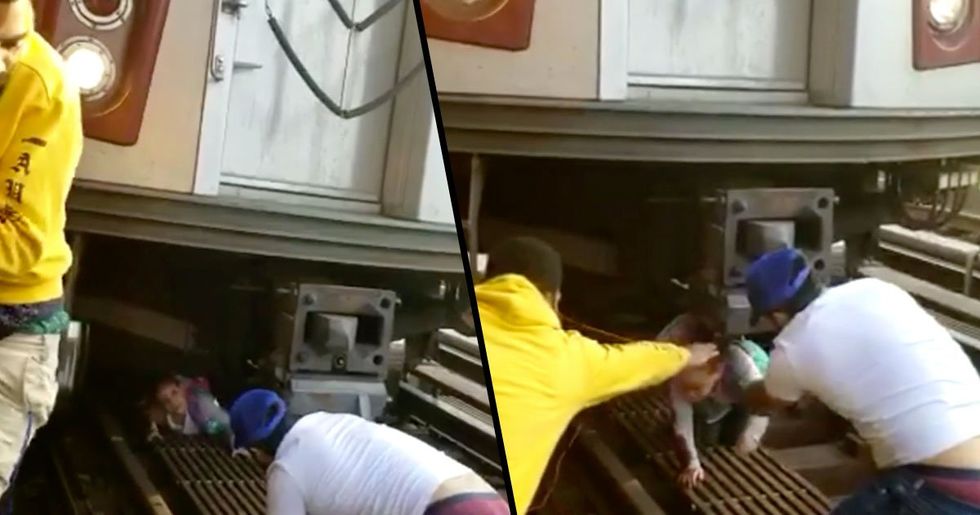 Tragedy hit at Kingsbridge Road station in the Bronx a little before 8am on Monday. As morning commuters stood to wait for their train, a forty-five-year-old male stepped off the platform.

The man, who was later confirmed to be Fernando Balbuena-Flores, wasn't alone.

Horrified witnesses watched as he climbed onto the tracks holding his 5-year-old daughter in his arms. What happened next shook everyone.

Continue scrolling to read all about the incident and the aftermath.

The 8 am commuters watched as Fernando Balbuena-Flores stepped onto the tracks with his daughter in his arms. When the southbound No. 4 train sped into the station, he was struck and died on the scene.

The horrified onlookers were not sure if the little girl was okay.

When the train halted to a stop, two heroic onlookers dived onto the tracks. The two men, who were later named as Jairo Torres and Antonyo Love, crawled under the train to see if the little girl was injured.

Antonyo Love wasn't even on the platform, but, after hearing screaming, he ran to the scene. He saw that there was one man (Torres) already on the tracks trying to help. Speaking to The New York Times, Antonyo Love, explained that "when he jumped onto the tracks, he saw Mr. Balbuena-Flores’s body beneath the train’s wheels. The girl was crying and there was blood on her head."

He recalled that "the only thing she was saying was ‘Papa, my papa.'" After being encouraged by the two brave men, the girl eventually crawled towards them and they lifted her to safety.

Some commuters resolved to comfort the child.

Naturally, everyone on the scene was shaken up. The fact that Balbuena-Flores' body still lay beneath them, mangled up in the wheels of the train, was a horrifying experience that none of them are sure to forget. The commuters struggled to tear the little girl away.

Antonyo Love was disappointed in some onlookers.

The heroic man risked his own safety by running to rescue the little girl. Speaking to reporters at the hospital afterwards, he spoke about how disappointed he was by some of his fellow commuters. He said: "Like, regular New Yorkers, pulling out their phones. Really? Let’s get down there and help."

To add insult to injury...

Bruised and shaken from crawling under the train to rescue the little girl, Love couldn't believe the gall of one light-fingered onlooker.

"Please do not leave your bags unattended."

Surely, this rule, which is constantly drilled into us on public transport and in public places, shouldn't have been necessary during these circumstances... Sadly, one light-fingered Lenny didn't think that the fact that a guy had only put his bag down to save a little girl made it any less of an opportunity to swipe. Love stated: "Why would somebody do that? I’m saving their lives and someone took my bag."

Thankfully, some people know how to pay heroes respect.

Ruben Diaz Jr., the Borough President of the Bronx, decided to honor the heroes.

"An inspiration to our entire borough."

Speaking at a press conference to honor Jairo Torres and Antonyo Love, Diaz Jr. thanked them for their bravery. The Bronx President explained that the men "risked their own safety to save a little girl from a tragic incident at the Kingsbridge Road subway station. These men are living examples of true courage and an inspiration to our entire borough." Torres played down the accolades, explaining to CBS Newyork: "I never think about anything. I just care about saving the life of the baby."

The little girl was taken to the hospital and treated for her injuries.

She was taken to Jacobi Medical Center in the Bronx and was reunited with her mother there. The child's mom, Niurka Caraballo, told the press: "The girl is in perfect condition."

"Everything is O.K., except that now I’m without my husband."

With reporters gathering outside of the family home in the Bronx, the mother came out and released a heart-wrenching statement. Speaking in Spanish, Caraballo stated: "Thank God and the angels who watched over her. Everything is O.K., except that now I’m without my husband."

Depression is a serious illness.

After the horrific incident on Monday, it has been revealed that the late Fernando Balbuena-Flores was suffering from severe depression and had recently come off his medication.

Taking on the responsibilities of fatherhood whilst battling depression can be crippling.

Balbuena-Flores clearly felt that he had no other option than to jump in front of that train. Sadly for those that suffer from the illness, it can often seem as though there is no light at the end of the tunnel. Being responsible for a young family while suffering from depression can feel like the weight of the world is on your shoulders.

For anyone suffering from depression, particularly fathers suffering from the illness, read Twitter user, Jessica Holmes', above tweet. Holmes and her father have both battled depression but are still here, grateful to be making it through.

No one knows why Balbuena-Flores took his daughter with him onto the tracks.

The father was clearly not in his right mind. Perhaps he could not bring himself to let go of his beloved daughter. Balbuena-Flores put his own body in front of the train, shielding her from the hit. Obviously, it was dangerous to bring her on to the tracks, but, now, we should just thank God that the little girl was alright.

Depression has no face.

As Paul McGreggor points out, there can be no judgment against those that commit suicide. Everyone is different and no one is an exception.

Robin Williams' daughter has spoken out about her late father's suicide.

Known by some as the silent killer, male depression can hit at any time. But statistically speaking, the average age that depression will strike in a man is thirty-two-years-old. Saying that, the highest spike in depressive episodes for men in America is between the ages of eighteen to twenty-five-years-old. Circumstances can also play a part in causing the onset of depression.

The stigma around male depression ought to be a thing of the past.

We are in 2019 now, it should be totally acceptable for men to talk about their feelings. It is vital that men can open up and talk about what's going on inside their heads. Sadly, in this case, it seems as though Balbuena-Flores was reaching out for help. I think that the fault lies at the hand of our corrupt medical system. I wouldn't be surprised if the father was struggling to pay for his over-prized depression medication and so stopped taking it. The reality of cutting out medication because of the absurd cost is a real problem for millions of Americans. Continue scrolling to learn about the diabetic man who died after he could no longer pay for his insulin...