50 Cent Rents out Toys R Us, Lets Son Have Anything for Christmas | 22 Words 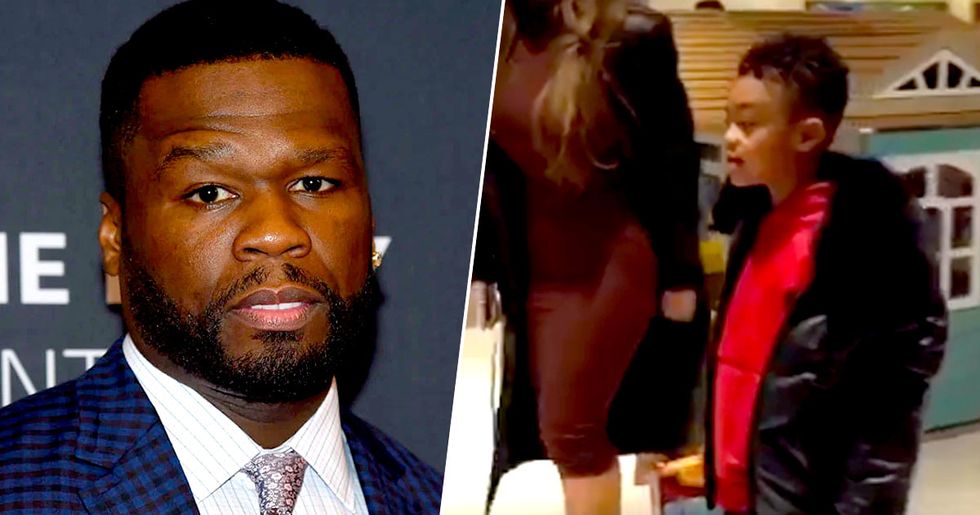 50 Cent Rents out Toys R Us, Lets Son Have Anything for Christmas

Curtis James Jackson III, aka 50 Cent, is one of the biggest names in rap history. He's also the sort of guy you don't wanna be owing money to (if you scroll on, that'll make sense).

However when it comes to fatherhood, 50 Cent is a pretty good dad, as this story will prove.

Recently he was spotted renting out Toys R Us, and allowing his son to pick out any present at all for Christmas.

It's sure gonna be a good Christmas down at fiddy's place.

50 Cent is certainly an interesting character.

And, most of the time, we love him for it.

We were big fans of 50's stance against Gucci's horribly misjudged release of a sweater that looked a lot like a racist caricature.

Gucci did issue an apology, but many decided to boycott the designer brand and 50 Cent took this to the extreme. He took to Instagram to burn his Gucci shirt, captioning his post, "I gotta get rid of all the Gucci I have at home. I’m not supporting their brand anymore."

But some of 50's antics have been a little more controversial.

Like when he said that he wouldn't mind if his own son, Marquise Jackson, got hit by a bus after he posed for a picture with 50's rival, Kenneth “Supreme" McGriff. Yikes.

But 50 has been in some really hot water in the past.

In 2015, 50 Cent lost a lawsuit that ordered him to pay $6m to a woman whose sex tape he posted online without permission.

After filing for bankruptcy, 50 posted this photo to Instagram alongside a video in which he said: "My crib is almost finished in Africa."

Judge Ann Nevins ordered him to pay back around $23m.

A hefty amount of money.

And thanks to the $13.65m that he received in a settlement of a legal malpractice lawsuit against other attorneys, 50 paid off his debt two years later.

So 50 knows a thing or two about paying up.

Which seems to be why he's so adamant that he gets his money back if he's lent it to anyone.

Emmett is perhaps most famously known, though, for being Vanderpump Rules star, Lala Kent’s, fiancé.

All of this actually started with Lala.

Back in April this year, 50 posted a clip of Kent from Vanderpump Rules in which she explains how she met Emmett. “I let him hit it the first time and we were inseparable," she claimed. “He would just send me, like, really expensive gifts. The first night we banged, I got a car the next day. He was like, ‘Do you want a Range Rover?’"

And 50's reaction was savage.

He captioned the video: “10 seconds left in the 4 quarter hoe’s are Winning. Do you want A range rover, yes, bitch yassss. Then just run out and suck a dick. LOL smh."

Emmett begged 50 to end the attack on Lala via a series of texts.

After mistakingly calling him "Fofty" (lmao), Emmett pleaded with 50 to stop attacking his wife, claiming that he was heading to the emergency room because he was experiencing chest pains, presumably as a consequence of the stress that the whole thing was putting him under.

And, of course, Fiddy posted the texts to Instagram.

"?look at this fool taking selfies, you better get me my money fool", 50 captioned the post.

"Did you tell her you owed me a million dollar over 6 years. Keep playing with me and get ya f*cking head cracked in front of everybody", read one text to Emmett.

"@randallemmettfilms sent me 250k today but I want all my money Monday," Fiddy posted when he shared the texts online.

It looked like Fiddy was enjoying himself amid this feud.

Twitter-user, Julie McCoy, pointed out that 50 had posted a screenshot of Emmett's Wikipedia page, which temporarily read: "'He owes 50 cent (aka Fofty) a million by Monday or else. He's faked a heart attack to get out of it." The Wiki entry and 50's Insta posts have now been deleted, though. Shame.

And it wasn't long before Fofty memes hit the internet and had people dying over them.

"FOFTY!! I howled at the Pooh meme", one Twitter-user replied.

Well, did Fofty get his money after all that?

Yes! 50 Cent posted a tweet to confirm that he had indeed gotten his money back from Emmett. This is the only post of 50's that he's kept up since the feud started.

We don't know about you, but we think that that story's enough to make anyone avoid owing anything to 50 Cent.

And it seems like someone else thought so, too.

He had settled another debt.

50 revealed that at a meet and greet, a fan had given him twenty dollars.

The fan claimed that he stole one of 50 Cent's CDs while he was at school, and so the twenty dollars rightfully belonged to 50.

The reason that he decided to settle his "debt" with 50 was hilarious.

"The only person who knew about it was my cousin, but this bitch on some bullshit so I know she going to go left on me. I don't need you putting me all over your Instagram," 50 revealed that his fan had told him.

And the internet loved the story just as much as 50 did.

ale_0207: "Hahahah hes ttoooo fuckin petty got us all scared out here hahaha"

We doubt that anyone will take anything from 50 now.

Some are even offering to wire him money for the music that they illegally downloaded back in the day. This man has some serious power (no pun intended).

Nonetheless, we have a huge amount of respect for the fan who gave 50 his money "back".

We just hope that it doesn't lead to a hunt for other people who have done something similar...

We certainly wouldn't want to be a victim of this guy.

Not that we owe you anything, Mr. Cent...

The best thing to come out of all this?

Even Fofty merch has become a thing.

But although Fofty may sound quite cute...

He's a force to be reckoned with.

But it's not all serious.

Now 50 Cent is in the news for a much more lighthearted reason... He's been making sure his son has a verrrry happy Christmas.

He rented out Toys R Us.

According to TMZ, 50 Cent spoiled his son rotten, by renting out an entire Toys R Us store for just himself and his kid. It's thought that doing so would cost $100,000 by itself...

He let his son get anything.

Yep, rumor has it that after spending 100,000 on renting the place out, 50 Cent then allowed his seven-year-old son, Sire, to pick out any present he wanted at all. That's gonna be some Christmas alright.

Fiddy even had Sire's name incorporated into the store's branding so that the name read Sire's Toys R Us. Now that is extra.

Even Geoffrey The Giraffe was there.

Geoffrey The Giraffe, who was rumored to be in retirement, made an exclusive appearance for 50 Cent's kid. Gee, I wonder what he'll get his son next year...