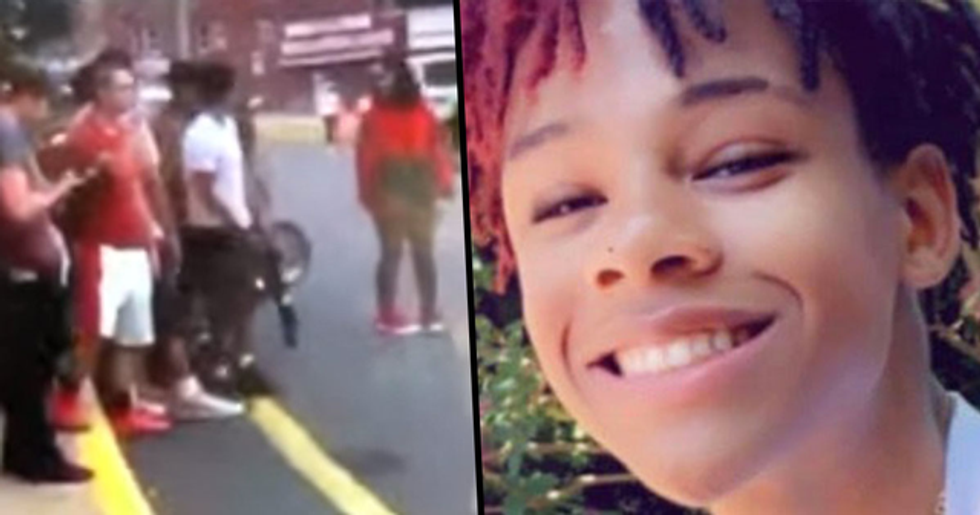 More than fifty Long Island teenagers stood by and watched as a teenage boy lay bleeding out after a fight outside a strip mall earlier this week. Khaseen Morris was just sixteen when he was fatally stabbed during a fight - and not a single bystander stepped in to help.

Morris died in hospital shortly after the incident, and police are flabberghasted over the lack of response by his peers. There is one potential upside, though - the fact that so many filmed the stabbing means that they shouldn't have too much trouble identifying the perpetrator.

Bystander apathy has long been a social concern.

The fact that otherwise morally good and law-abiding citizens can sit back and not do anything when witnessing something horrific is pretty frightening.

One prime example is the murder of Kitty Genovese.

In 1964, the waitress was walking alone in Kew Gardens, Queens, late at night. It was reported that over forty witnesses saw and did nothing (although this was later disputed).

And, with all of us so obsessed with our phones, it seems like things could be set to get even worse.

And this story is another horrifying example.

As a group of teenagers stood by and watched as their sixteen-year-old peer bled out after being stabbed in a brawl in Long Island.

The victim was Khaseen Morris.

He was involved in a fight, which turned fatal, and later died of his injuries in Nassau County hospital.

The fight took place outside a strip mall in Oceanside, New York

The incredibly public nature of the attack is what has shocked the police - and the public.

But the most shocking factor?

"They videoed his death instead of helping him," Detective Lt. Stephen Fitzpatrick of the Nassau County Police Department said in a press conference.

Fitzpatrick was shaken by the bystander apathy.

"This can't go on. Your friends are dying while you stand there and video it. That's egregious."

He spoke in a full press conference, broadcasted online.

"There's got to be about 50, 60, 70 kids here," he said. "We have a handful of kids that have come forward and have identified subjects involved in this. There is definitely more."

But he did point out how much evidence the group filming may offer.

He claimed that, by finding all of the footage, the police will be able to get a clear picture of what's happened. "After I put handcuffs on you is not going to be the time to come forward," Fitzpatrick warned.

Police are hopeful that the huge amount of evidence will make their investigation easier.

There are many witnesses, plus the videos of the fight make for an easier method of narrowing down persons of interest.

The fact that the teens filmed the incident is horrifying.

But it could also prove to be helpful in bringing to justice the criminals responsible for Morris's death.

Morris's sister, Kedeemah, has spoken out.

She told news outlets that the fight in which Morris lost his life was over a girl, who had asked her brother to walk her home.

She also tried to show the world the bigger picture of her brother.

Kedeemah described Khaseen Morris as "sweet" and "funny," talking about his love of skateboarding, drawing, and anime.

"He said, 'I'm friends with everyone,'" she claimed.

"My brother, he shrugged stuff like that off," Kedeemah went on.

"He told the boy he didn't want his girlfriend, it was nothing like that, he just walked her home. The boy said he didn't care."

Many have been horrified by the situation.

The vast majority of us cannot imagine standing by and allowing such an awful thing to happen - let alone filming it.

Some have called for action.

Many are questioning whether any legal action can be taken against these bystanders.

Some suspect an ulterior motive.

@prageru The Selfish instead of Selfless Selfie generation. They all want to become instant Internet Stars overnigh… https://t.co/SWrh9zzomv
— Delali (@Delali)1568840032.0

Some question whether the teens had a pernicious reason for their filming - going viral online.

Perhaps the fact that we live in such a pervasively violent culture means that teens are pretty much desensitized to it - meaning they don't comprehend the permanent and tragic consequences of it.

Here's some footage of the attack.

But we have to warn you - some of the content of the video makes for pretty disturbing viewing. We can only hope that Morris's death is not in vain and serves as a reminder to everyone that we need to help one another. RIP, Khaseen.