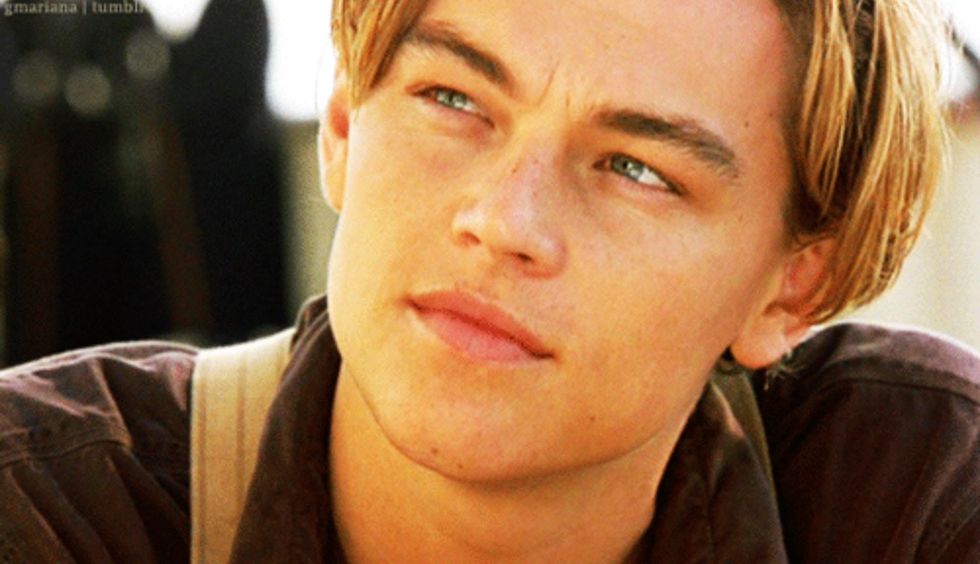 At one point or another, we've all delved into that dark part of the internet. You know, the one with all the completely weird and totally insane fan theories about our favorite movies? Yeah, that one.

And usually there's nothing to them. But this one about everyone's favorite 90's "epic romantic disaster" movie Titanic...well...it's about to blow...your...mind.

According to the theory, Jack Dawson is actually a time traveler.

Okay, stay with us. It sounds crazy, we know, but keep reading.

There are at least 6 inconsistencies in the film that point to this interpretation. And then, to top it all off, the reason why he's a time traveler really ties a bow on the crazy theory...

1. Jack gambles for a ticket to board the Titanic.

Jack has to hustle to get on the Titanic by gambling for a ticket.

Well, because he has no currency from that time period.

Okay, yes, it's a little suspicious and there could be other reasons, but it's not totally out of the realm of possibility, right? Taken with the following facts, time travel definitely begins to seem like the most likely explanation...

Here's where things start to get a little weird:

2. Jack claims to have gone ice fishing at Lake Wissota.

Perfectly reasonable...except that Lake Wissota, a man-made lake in Wisconsin, was built in 1917. That's five years AFTER the Titanic sank.

Are you getting the chills yet?

4. Jack's ~super dreamy~ haircut was completely out of place for the early 1900s.

Ahhh, that glorious, floppy 90's hair...remember how it made you swoon? Yeah, it was completely out of fashion in the early 1900s.

In fact, men's hairstyles in that era were close-cropped at the sides, with some length on top, but neatly slicked back — as demonstrated by the Edwardian actor George Arliss...

Jack's hairstyle didn't come into fashion for another 20 years or so, in the late 1930s.

And speaking of fashion...

5. Jack's backpack was also totally out of place for the Edwardian era.

When Jack and Fabrizio are seen running to board the Titanic, Jack is carrying a rucksack much like above...which is standard issue Swedish Army gear, circa 1939.

Oops. Looks like Jack neglected to pick up a bag when he arrived in 1912...

6. Jack should've picked up some different cigarettes, too...

Because the filtered cigarettes that he's seen smoking throughout the movie (and that he also gives to Rose) didn't come out until the mid-1940s.

Now that the case has been made for Jack being a man traveling through time, one big question remains...

Why did Jack Dawson travel all the way back to the Edwardian era, just to fumble his way through 1912?

To save Rose, of course. Though it gets much more interesting than just that...

You see, if Jack hadn't been on the Titanic, Rose would have committed suicide by jumping off the side of the ship. Jack came back to 1912 — altering time forever — to keep that from happening.

So what can Jack, a poor time traveler do to keep Rose safe? Never leave her side.

Of course, this brings up the hard fact that if he'd let her die, the boat probably wouldn't have sunk.

Think about it: if a wealthy woman in 1st class had disappeared, the Titanic would have stopped to look for her. With that delay, the Titanic may never have hit the iceberg.

But couldn't Jack have saved the whole boat?

Why would Jack go out of his way to save one woman, instead of trying to prevent the Titanic from sinking?

We may never get an answer to this final question. But one thing is for sure, it's a good thing Jack saved Rose. And to see this, all one needs to do is fast forward from 1912 to, say, 1984...

Note the comment below by the genius on Facebook who proposed this theory in the first place...