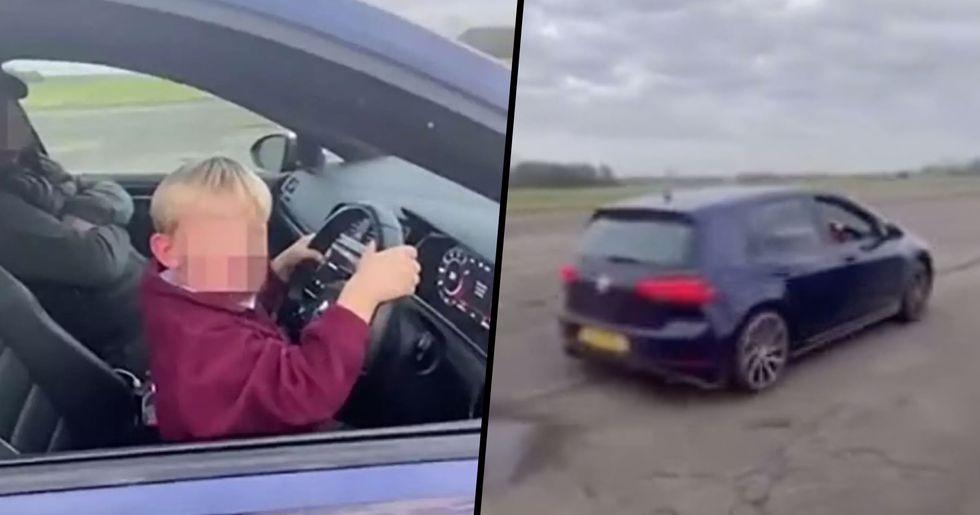 In an indisputably bad parenting moment, a father has recklessly let his 6-year-old behind the wheel.

The footage, which first emerged on Instagram, has enraged people all over the world. It shows a boy hurtling down a road at lightning speeds.

As of yet, the identity of the father, who recorded the video remains a mystery.  However, sitting in the passenger seat is another mystery man whose face, along with the little boy's, is blurred.

Continue scrolling to see the shocking footage, and find out more about this horrific parenting decision.

Kids getting behind the wheel might make for a cute photo. But in practice, a kid literally driving a car isn't a good idea.

Rules of the road.

It's true that everyone parents differently. What might seem perfectly acceptable to one parent can be considered absolutely terrible parenting by another.

However, this particular incident will most likely garner a pretty unanimous response...

Surely we can all agree that this is definitely a case of bad parenting.

Kids should be riding bumper cars.

Not getting behind the wheel of Volkswagen Golfs... I mean, a 6-year-old can barely reach the brake pads!

We got out all of our car driving urges playing video games. As a parent whatever you think about the likes of Grand Theft Auto, I think you'll agree it's safer than your child actually attempting to drive your car.

The rich kids had these...

Or the kids whose mom and dads got divorced. The electric car was certainly the envy of the school playground.

The poor kids had these...

Or at least the shopping malls we skulked around in had these.

This isn't the first kid driver to go viral.

Although in the case of young YouTuber, Jack, who uploaded a video of him "stealing his mom's car" back in 2017, the whole thing was a hoax. Using a fake steering wheel on the passenger seat Jack and his friends fooled audiences. To this day, his prank video has garnered over 230,000 views.

The absurdity of it.

I think the popularity of videos of dogs and children getting behind the wheel is because it seems so absurd.

As shocking as the footage of the 6-year-old actually driving the Volkswagen Golf is, this news story from CBS about another young boy getting behind the wheel is actually really cute.

The passenger appears more than comfortable with their dog taking the lead in driving this electric scooter down the street.

Who is Mr. Chill?

The passenger in the footage may well be blurred but from his crossed arms and general disposition, it seems as though he is perfectly comfortable with the little boy driving.

Its true adults can be bad drivers...

But that does not justify a young child getting behind the wheel.

If there's anything we can say in defense of the parent who, not only allowed, but also videoed his little boy driving, is at least they chose a desolate area. If they had been on a busy street the parent might have got busted by the cops!

Pretend driving is just as fun...

And when a child drives a mini-electric car, it's not illegal and the threat of injury is removed. So a win-win, right?

What once seemed like a far off future dream is now a reality. Vespa have already launched a self-driving mode on their lastest vehicles.

The future is here.

With self-driving cars, the argument of age-restrictions on driving could ultimately go out of the window.

Does it matter who's behind the wheel if the car is actually driving itself?

Some people disapprove of kids at the wheel.

Dangers still exist and self-driving technology is still very new and untested. It is reckless to put a child behind one of these things.

So, how about a 6-year-old driving a regular car?