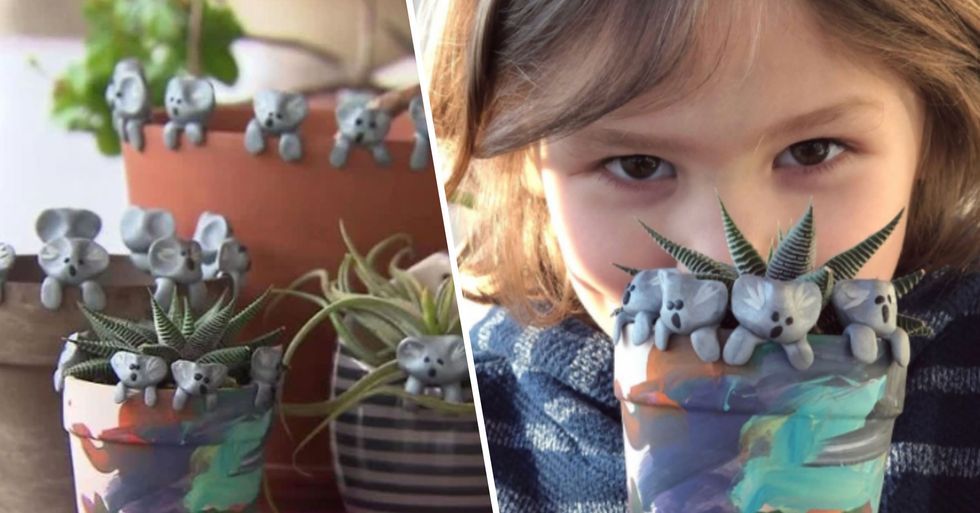 A tremendous amount of money has so far been raised to help the struggling country, and a large chunk of that has come from a 6-year-old boy in Massachusetts, who has been selling his homemade clay koalas... Keep scrolling for the full story.

Australia is currently being torn apart by one of the worst bush fire crises seen in decades.

Australian civilians have also been doing what they can...

Countless stories and photographs of the locals' bravery have been emerging, which shows courageous people who have run into the flames to rescue innocent animals.

The country has truly come together in its time of crisis.

via: Matrix for Daily Mail Australia

And people outside of Australia have been helping out as best as they can.

Regular people from all over the globe have been doing their bit...

And a tremendous amount of money has been raised from donations and efforts from people all over the world.

And a significant chunk of this money comes from one little boy from Hingham, Massachusetts.

6-year-old Owen Colley has been upset to hear about the Australian bushfires, his mom, Caitlyn told CNN, and the youngster was even more devastated to hear about all the animals inured in the flames.

Owen wanted to help in any way he could...

But together, the family came up with an idea.

Miniature clay koalas were the answer. "We asked him if he wanted to help and ... together we came up with this. We could make some clay koalas and give them in response to donations from friends and family."

And his parents set up a way for people to donate to Wildlife Rescue South Coast, a wildlife rescue group in New South Wales, for every koala they purchased. So far, Owen has made around 55 koalas... But the donations have surpassed that.

Their fundraising goal was originally set at $1000...

But now, it has reached a number that none of the family ever expected.

Incredibly, over $135,000 has now been raised. And, as expected, the Colley's are completely blown away. "We are blown away. We thank you for your patience as we finalize the logistics surrounding supplies, shipping, and production." They wrote on their GoFundMe page, "As you can imagine, we have been busy recruiting family and friends for koala-making parties. We love all of the offers of support flooding in, but unfortunately do not have the bandwidth to reply to everyone at this time."

What an amazing family.

Donations that earn an Owen-created koala have come in from just about every U.S. state, and they are working hard at shipping out his creations as quickly as they can. "Anyone can make a difference and when we come together we can make an even bigger difference," Caitlyn said. "I just love the idea that maybe other kids can take this to their communities and sell little clay koalas locally and raise money for this great cause." Owen now aspires to help more organizations and animals across Australia - For photographs that sum up the crisis, keep scrolling...