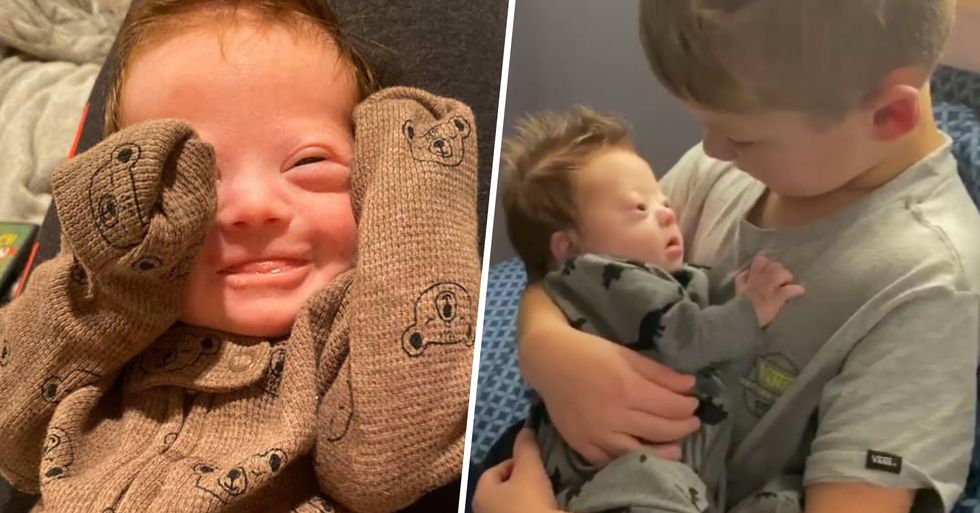 There's nothing quite as cute as siblings looking out for one another, especially when a new baby is introduced into the family.

But this one little boy took things to another level when it came to bonding with his new baby brother.

There's nothing quite as wholesome then welcoming a baby sibling into the family.

Well, most people will agree with that anyway!

Having a younger sibling brings on a lot of responsibility...

Because being a big brother or sister isn't an easy job.

But for many families...

Welcoming another baby can prove to be a very testing and difficult experience.

And she and her husband, who live in Arkansas, recently welcomed a baby boy into the world in November 2019.

His name is Tripp...

And he has been diagnosed with having Down's Syndrome.

Nicole and her husband learned of the diagnosis before Tripp was born...

"When we first learned about our son Tripp’s Down's syndrome diagnosis while I was pregnant, we told our oldest boys Jayce and Rayce about it," she wrote in a Facebook post, explaining how they, as a family, dealt with the news.

She wasn't sure how her children would react...

But the boys should a great deal of respect and interest, and after doing some online research, they had created their own ribbon that was titled, "Ride for Tripp."

The boys clearly proved themselves to be brilliant big brothers...

And this didn't change upon Tripp's arrival into the world.

They have thrown themselves into their roles as big brothers...

And it is especially Rayce who is eager to take care of his baby brother.

Nicole recently uploaded a video of Rayce with his little brother...

It is truly an adorable sight...

"This is how Rayce bonds with Tripp. He sings to him all the time. He swears this song is about him and his brother," Nicole wrote in her Facebook post of the video.

Rayce doesn't see his brother's condition as an issue at all.

"Love doesn’t count chromosomes," Powell ended her post. "Or as Rayce says, 'Aren’t we all different?'"

She didn't expect it to go viral worldwide.

It has now had a staggering 1 million views...

And it has received a lot of love, with people leaving comments such as, "What an amazing big brother," and "This is the sweetest thing I've ever seen!"

It's safe to say that this happy little family will make the best big brothers and sisters! Keep scrolling to see the cutest baby girl with Down's Syndrome smile for her new adoptive mom...