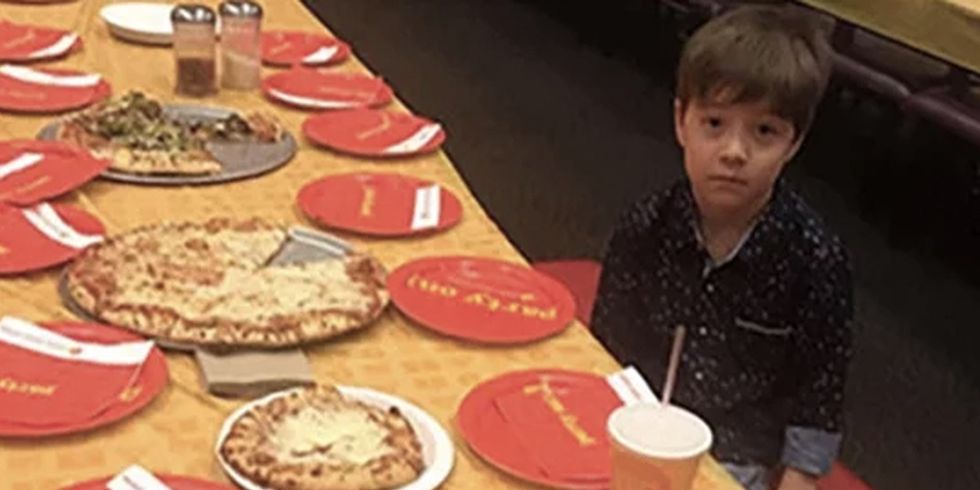 A six-year-old boy experienced seriously sad disappointment after he was allegedly let down by his friends.

They failed to turn up to his birthday party for fun and pizza, and he was absolutely devastated.

What happened next will warm your heart.

He's from Tucson, in Arizona. He invited 32 of his school friends to a party for pizza. None of them turned up.

Look how sad he is.

His mum posted the photo to social media to try and get some of the internet community to wish her son a happy birthday.

The news was picked up by local media

And from there, sports teams began to offer Teddy the opportunity to come and see their games for his birthday.

A local soccer team even joined in

The team invited Teddy to bring some pizza and enjoy the beautiful game with the team's other 7000 fans to celebrate his 6th b-day.

And that's not all

It wasn't just local teams and sports pages who came to Teddy's rescue...

The internet came together in solidarity

Most people recognised the loneliness Teddy must have been feeling, and resulted in an outpouring of love on social media.

People even sympathised for Teddy's mum

Some internet users were as sympathetic to Teddy's mum as to Teddy himself, as seeing her son in such a horrible situation must have been difficult.

Teddy made loads of new friends

Teddy made a fair few more than 32 friends that day, and a few of them actually gave out some pretty wise advice.

And some offered him the chance of a lifetime

Local businesses were falling over themselves to give Teddy the birthday he deserved.

But mostly, it was the solidarity which won the day

Teddy saw these messages, and his mum said he didn't stop smiling.

Even A-list celebrities got involved

DK Khaled offered to give Teddy a present, though at the time of writing it's not entirely clear what that is.

Teddy's mum had no idea it would be quite so bad

His mum, Sil, had already been warned by some of the parents that their kids couldn’t make it, but she had no idea there would be absolutely no guests at all.

Sil had even made goodie bags for the kids

Sil had made up 32 goodie bags for Teddy’s classmates; each containing a party invite. She even spoke to some parents the day before who said their kids would definitely be in attendance.

He wrote: If you get a chance please wish Teddy a Happy Birthday. His mom sent me this after his friends weren’t able to make it to his birthday party.

And as though Teddy didn't have enough great birthday messages, here's a good boy willing to eat pizza with him anytime. Result!

Some people weren't quite as convinced

As is always the case, a lot of people were calling fake on this entire story.

Some even claimed to be at the party later on

Some people even claimed to have evidence that the photo was staged and taken before the party began, though no actual evidence has surfaced.

People on the internet are always cynical

So it's no surprise then that there was a small portion of social media were calling Sil's motives into question.

Some of these responses were themselves going relatively viral

It became a hot topic of conversation in the replies to posts about the subject. But again no evidence of fraud has been seen.

They challenged the basic logic of carrying on organising the party if no rsvps had been received.

But none of that matters

Because Teddy had enough friends out there that he got to have a pizza-making masterclass at the pizzeria.

And his mum was so grateful

Sil showed Teddy all of the messages of love, something for which they are both undoubtedly very appreciative.

Teddy's friendship with his mum is the most important thing in this story.

And it seems they rock on together

Little Teddy loves to dress up as Axl Rose from Guns n Roses, and he absolutely rocks that look!

And his mum is his bandmate!

Teddy's mum is the Slash to his Axl, and that's the true moral of the story.

So keep rocking out, kid.

And soon you'll have a group of friends who realise how cool you really are.

And when you win the next fancy dress competition...

You'll have a full band with you to go on up there and accept that award in full rock and roll style.

But until then, just keep rocking on

And to be honest, just eat all those pizzas yourself.