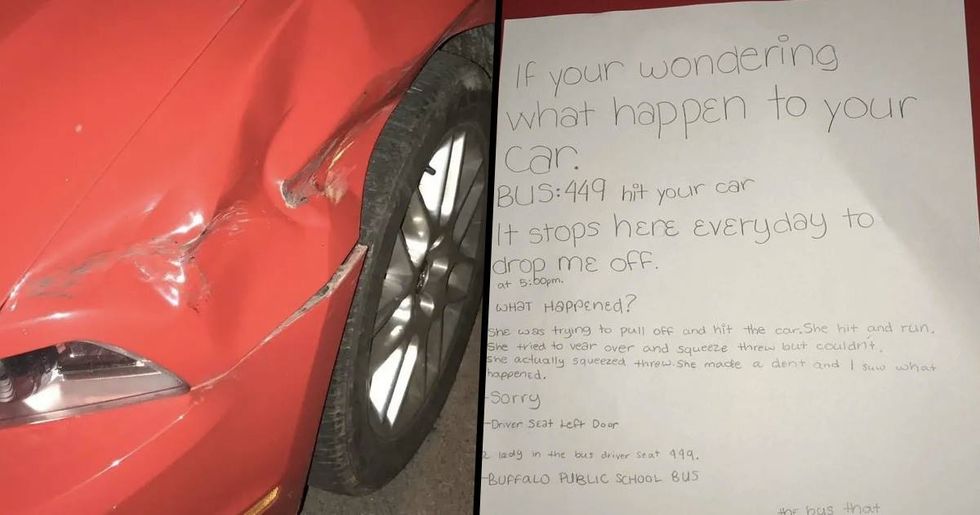 It's not every day a little kid helps you catch the person who did a hit and run on your car, but sometimes people are just in the right place at the right time - even if they are only 11-years-old.

And that's exactly what happened when a 6th grader left a detailed note for a man, explaining how his school bus had hit his car before driving off from the scene.

So if you've ever returned from a long day at the office and notice your car has been scratched or even dented, whilst you've been at work, and your boss still hasn't installed CCTV in the carpark. You might not have to reach for your wallet, there may be a school kid that saw it all and wrote down every single detail.

And in this case, they even drew a picture of the bus. Note: it isn't to scale.

We've all accidentally driven into a street lamp or our garage, okay not all of us -some of us. But have you ever driven into another car?

Because that's exactly what happened to this guy.

Andrew Sipowicz, a 21-year-old baseball player, found his Ford Mustang had been damaged on Monday night.

And he wasn't happy.

Sipowicz, who attends Canisius College, was heading back to his home in Buffalo, New York when he saw his car had been crashed into.

"Shoutout to the anonymous 6th grader for saving me a couple thousand (bus not drawn to scale)" Sipowicz tweeted.

And this was the note.

It's pretty hilarious, but it's also cute. They even wrote what time it happened, and took the time to draw some screaming kids inside the bus.

No surprise it went viral.

Sipowicz tweet has received over 1.2 million times and currently has 258 thousand retweets: the internet can't get enough of the note.

Cause it's actually adorable.

It's not like a 6th grader helps you out like that very often, so when it does happen, of course the internet is going to explode.

And they learnt a valuable lesson.

No Thanksgiving homework is a pretty good reward for helping somebody out, and we all know what Sipowicz is thankful for this year.

They're even getting rewarded for it!

One of the teachers, at the 6th graders' school, recognised the handwriting and help Sipowicz find the girl who wrote the note.

Kevin Garcia, the vice principal of Buffalo Houghton Academy, said the school will celebrate the girl's "outstanding leadership" with a citizenship award when he spoke to CNN.

But nothing beats people's reaction.

What exactly was going off on that bus? Why are all the children screaming? We can't tell whether we're amused or concerned.

Others praised her drawing skills.

"Dammnnn this mf picasso," is perhaps the best tweet we've laid our eyes on in 2018. Seriously.

Cause she captured the moment perfectly.

Where they all looking out of the window to see what their bus driver and crashed into? Who knows.

Because the attention to detail is next level.

Basically, Twitter is full of people zooming into the screaming kids in the bus, but the girl's attention to detail is certainly something.

And of course, this joke was made.

Imagine thinking you've gotten away with something like hitting someone's car, then finding out a 6th grader had written everything down.

Which people also tweeted about.

This kid seriously didn't miss anything out. We're surprised she didn't name and shame the bus driver.

She's just won her first case, maybe the 6th grader could turn this into a full-time job. I'm sure people would offer better pay that 'no Thanksgiving homework'.

Maybe this was happening.

You never know. Maybe what looked like kids screaming, could have actually been them hitting the high notes.

Or it was the Illuminati.

We're laughing at this 'conspiracy theory': we just hope they're not actually being serious.

Either way, it's nice to see.

Because things like this rarely happen, but when they do, they help to restore your faith in humanity.

Of course, there's always one who wants to ruin it.

We all know adults with worse grammar than this 6th grader - we just hope to God he's joking.

But the internet shut him down pretty quick.

Which is exactly why we love Twitter so much. There's always someone to deliver some home truths.

First Student, who owns the buses and employs the drivers for Buffalo Public School said in a statement  to BuzzFeed News they will "cover the full cost of the repair."

"We commend her for her actions."

In the statement, First Student said: "we would be remiss if we didn’t mention that we are very impressed by this exceptional sixth grader."

First Student's have initiated the process to terminate the driver, who hasn't been named, that is responsible for the crash.

And for good reason.

First Student said: "the actions of our former driver are completely contrary to First Student’s training and what we stand for as a company."

Sipowicz has initiated the insurance process.

In First Student's statement to Buzzfeed News, the company said it had met with Sipowicz to initiate the "insurance process."

So she really did save him thousands of pounds.

Just imagine if the 6th grader didn't witness the crash. Sipowicz would have been clueless as to what happened.

Which is why you should always tell the truth.

Maybe our life lesson from the little girl's note is to always try and tell the truth. Even if you have just hit someone's car.

Because notes help everyone.

People started to share their experiences of finding notes attached to their damaged cars - looks like Sipowicz isn't on his own!