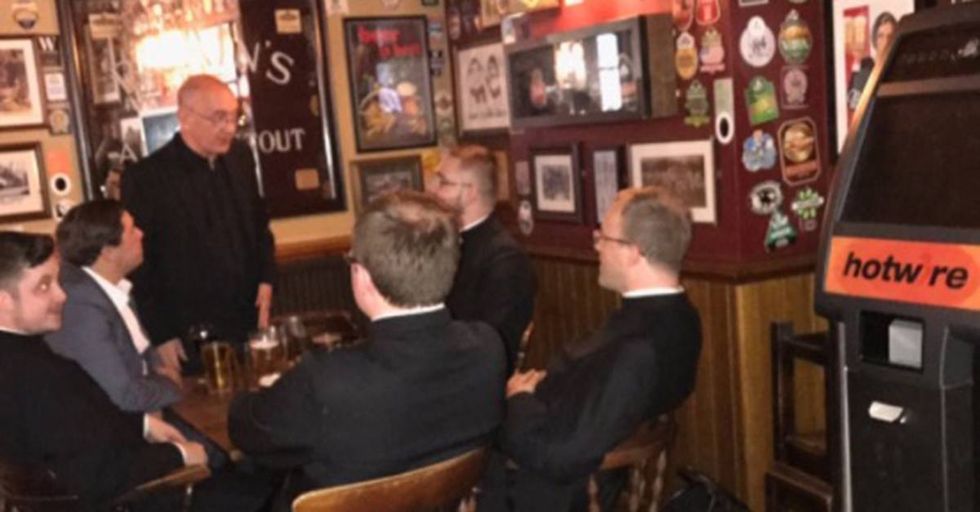 '7 Priests Walk Into a Bar and'...You Haven't Heard THIS One Before!

When seven Catholic student priests make their way through the world in full dress, you can't be too surprised if a few people are...a little incredulous.

The group of priests, just like students of so many stripes, wanted to wet their whistles.

So they ducked into the City Arms pub in Cardiff, Wales to grab a pint or two.

However, when they showed up at the front door, they were denied entry!

The reason will have you in stitches!

The pub is home to a lot of bachelor and bachelorette parties, so the doorman was skeptical.

He thought the priests were just a bunch of dudes in costumes, so he turned them away, thinking they would get rowdy with the low-key, mid-day clientele. Whoops!

Being patient men of God, the student priests explained that they were, actually, priests.

As men of God, I'm sure they were also quite convincing, because they go through the door no problem after that.

The hilarious story is BIG news over in Britain, and the priests have been interviewed and returned to the pub several times since the incident.

I mean, this is the sort of viral news story we can all agree on, right?

Check out Rev. James drinking a...Reverend James. Something tells me they'll be back!