$7,100 Hot Dog Couch Is Currently Being Sold at Your Favorite Department Store | 22 Words 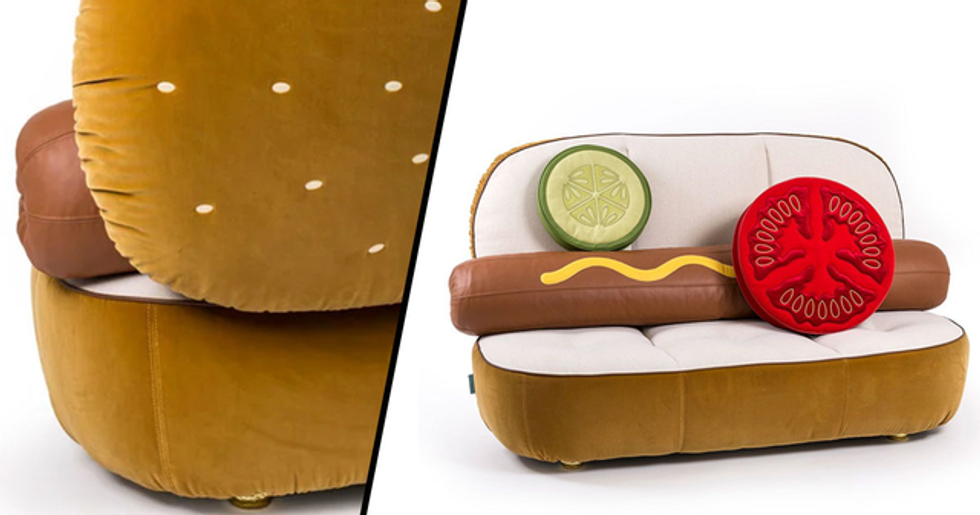 $7,100 Hot Dog Couch Is Currently Being Sold at Your Favorite Department Store

The internet is no stranger to out-there furniture - but the latest items to go viral are truly something else. Twitter has discovered some incredibly expensive upholstered items inspired by (believe it or not) the cheapest meat sandwiches around. The $7,100 hot dog couch, plus matching $4950 burger armchair, have taken the internet by storm - for all the wrong reasons. People can't believe the price tag of these supremely odd (and some would say ugly) items. For more shocking additions to the interior range, plus the best of the internet's reactions, get scrolling.

As a community, the internet loves a collective WTF moment.

There's something about the power of something weird that brings us all into agreement - which is nice in such a divisive world.

Even better when it's a collective "nope."

And one item this week has everyone on Twitter collectively shaking their heads in disgust.

A couch shaped like a hot dog. It's pretty ugly, for sure - but the real shock comes when you realize its $7,100 price tag.

Perhaps the internet can tempt you with an attractive burger armchair - a bargain by comparison, at just $4,950.

These offensive items were brought to Twitter's attention.

And, as you'd probably expect, the platform offered a ton of hilarious responses to the discovery.

Many had this immediate response.

In a world wherein there's a surplus of ugly furniture, it seems the hot dog couch reigns supreme.

@KimBhasin I have to assume this is some sort of money laundering scheme.
— Lukas Simonis (@Lukas Simonis)1568310994.0

It does seem pretty unbelievable that anyone would willingly part with so much money for such little reward.

There were other big questions, too.

Not only is the couch conceptually ugly - it seems to be factually inaccurate, too.

Although not everyone feels the same way.

Maybe there is some sort of majesty to this furniture. Like, if you look really, really hard.

While others are taking it as an inspirational message.

Hey, if a company can sell something this ugly for this much money, it makes your own pipe dreams seem way more reasonable.

Find the furniture a little out of your price range?

Don't worry, there are other items in the range that are easier on the wallet.

What if you just want to add a hint of the hot dog to your home?

You can also buy the condiment pillows for a more subtle effect.

Other items also came to light.

I am finally watching #Succession so it seems timely that I came across this and am trying to imagine who would pur… https://t.co/ryDpeBXc1C
— Elaine Low (@Elaine Low)1567901945.0

We're not sure who the market for the hot dog couch is - but we bet that they would also buy this purse which looks like a wad of cash.

Although some pointed out this fact.

Sure, the couch is a funny way to spend over seven thousand dollars. But it's not what we'd call a responsible way.

But hey - it doesn't seem as though Neiman Marcus is laughing.

Shares of Neiman Marcus owner Ares Management are up 71% this year, so who's laughing now? #hotdogcouch https://t.co/yJT1Ztvgf2
— MarketWatch (@MarketWatch)1568339321.0

So maybe we're the foolish ones, after all. Interested in more weird ways to blow a bunch of cash? Scroll on for the giant animatronic Pennywise statue that will haunt your nightmares.