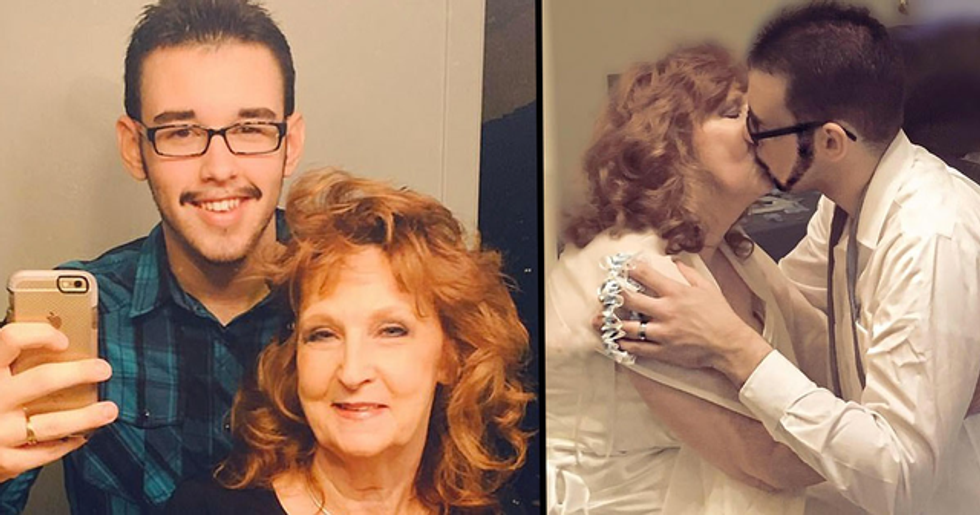 72-Year-Old Marries Teen She Met At Her Son's Funeral

When it comes to romance, large age gaps are becoming more and more prevalent. But this one may shock even the most jaded of news consumers. An age gap is one thing - but an age gap of 53 years is something else.

But it's a reality for couple Almeda and Gary Hardwick. The pair married after a whirlwind, two week romance in 2016, and are by all appearances very happy together. The thing that makes the story even weirder? The two met at Almeda's son's funeral.

The pair came to the attention of the internet after a profile in the New York Times, detailing their romance and marriage. They even have an active YouTube channel documenting their daily lives! And, as you may expect, Twitter has ... some thoughts on the pairing.

When you think "age gap" there's a certain image which immediately springs to mind.

In popular culture, the stereotype is always and older man paired romantically with a younger woman.

This trope is so common it's almost a parody.

One famous instance of this is the Jackass: Bad Grandpa sketch.

Romantic age gaps have been the subject of plenty of movies.

1993's The Crush told the story of a relationship between a 14-year-old played by Alicia Silverstone and a much older man, played by Cary Elwes.

And who could forget American Beauty?

In this 1999 classic, Kevin Spacey develops a dangerous infatuation with his daughter's best friend, played by Mena Suvari.

In the hilarious The Bachelor parody, one contestant, Virginia (played by Helen Slayton-Hughes) is far older than her prospective partner, Mark Orlando (played by Ken Marino).

It seems as a culture we're oddly fascinated by age gaps.

This advert by London estate agent Marsh & Parsons was removed from the Underground after facing significant public backlash for being sexist.

So it's no surprise that this story has been making waves.

The tale of the romance and marriage between Almeda and Gary Hardwick was first published in the New York Post, and has piqued the interest of the internet.

Almeda and Gary Hardwick are not your average couple.

With an age gap of 53 year, they certainly don't fit into your typical love story narrative.

They met at the funeral of Almeda's son, Robert. The connection was immediate, in spite of their difference in age.

Almeda has described their romance as a "whirlwind."

She's said, “We are always complimenting and kissing. We’re enjoying our relationship. When you meet that perfect one, that’s when you know you don’t want to lose that feeling."

Gary arranged the ceremony for under $200 and in under six days. Almeda borrowed her dress from Gary's cousin, and the wedding took place in the gardens in front of Gary's Aunt Lisa's apartment.

The pair had been introduced by Lisa.

Lisa had invited Gary to Robert's funeral, and Almeda noticed him almost instantly. She says, "I’d noticed this young man with a lovely smile during the service and thought, ‘Wow, this is the one." The feeling was mutual, with Gary saying, “She had the most gorgeous, sparkling blue eyes."

Gary's Aunt Lisa invited the pair to a group meal at Chuck-E Cheese, where Almeda recalls "We were both too nervous to eat and at one point he fell over his chair."

Both had come out of serious relationships.

Almeda had been married to 43 years to her first husband, Donald. Donald died of complications related to diabetes in 2013. In spite of this, she thinks of Gary as her soulmate, saying "“I was married for 43 years and there wasn’t a lot of kissy, huggy stuff going on … no romance."

Gary, too, was getting over a previous relationship.

Prior to Almeda, Gary had been in a relationship with a 77-year-old woman. “We were always fighting," he has described. “I fell into depression and was looking for a way out."

Gary even has tattoos of his new flame.

Alongside this statement piece on his arm, Gary also has the couple's names tattooed on his chest, surrounded by love hearts.

The two are capitalising on their newfound internet fame.

They currently share a YouTube channel, where they have over 70,000 subscribers and dozens of videos, including pranks, challenges and vlogs.

Recently, Almeda has started a new series on the channel.

The show, entitled Girl Talk, premiered on January 13th. In the first episode,  which currently has over 14,000 views, Almeda talks about her past relationships and how she and Gary met.

The couple even sell merch.

The pair sell over 50 different branded items in their Red Bubble store, including t-shirts, sweatshirts, wall prints and mugs. Here's the link, in case you ... want to buy something?

The couple do seem very happy together.

Almeda says, “The one thing I’ve learned is that when you truly love somebody, it doesn’t matter what anyone else thinks." Gary agrees, saying, "Almeda is so young at heart that age never bothers us, we never really think about it. I just know that God answered my prayers that day she walked into my life."

The pair's unlikely love story has captured the media's attention.

The appeared on UK daytime talk show Loose Women in April 2018, to talk about their romance (and sex life).

Some news outlets had a different perspective.

We do have to agree that Almeda looks amazing for her 72 years.

Twitter responses to their TV appearance were surprisingly positive.

One Twitter user put it quite succinctly. And to be honest, we can't help but agree.

Gary and Almeda replied to some of the positive responses.

From their official joint Twitter account, the pair thanked the positive commenters for being kind and non-judgemental.

Although, this being Twitter, not everyone was so positive.

One user pointed out how different the responses would be if the pair's gender roles were reversed.

Others has a more ... visceral reaction.

While this may be many people's initial response, it's important to remember that the two aren't hurting anybody by being in a relationship.

Of course, some users couldn't resist pointing this out.

It's definitely worth noting that the couple's nearest and dearest don't have issues with their relationship. In fact, the pair have the blessing of their families, including Gary’s mom, Tammy, 48, and his grandmother Carolyn, 71.

If these two make each other happy, then fair enough.

Even if their relationship seems a little weird to some, the fact that they're happy and in love surely can't be seen as a bad thing.

And their relationship seems to be functioning very nicely. Almeda describes it in her Girl Talk video, saying "In our relationship, we do little things each day to help each other out whether he cooks me supper or mops for me. We always thank each other. It’s the little things like that, cooking a meal, washing dishes."

Our thoughts? Live and let live.

They've each sound somebody who makes them truly happy, and so we have to say, fair play to them.