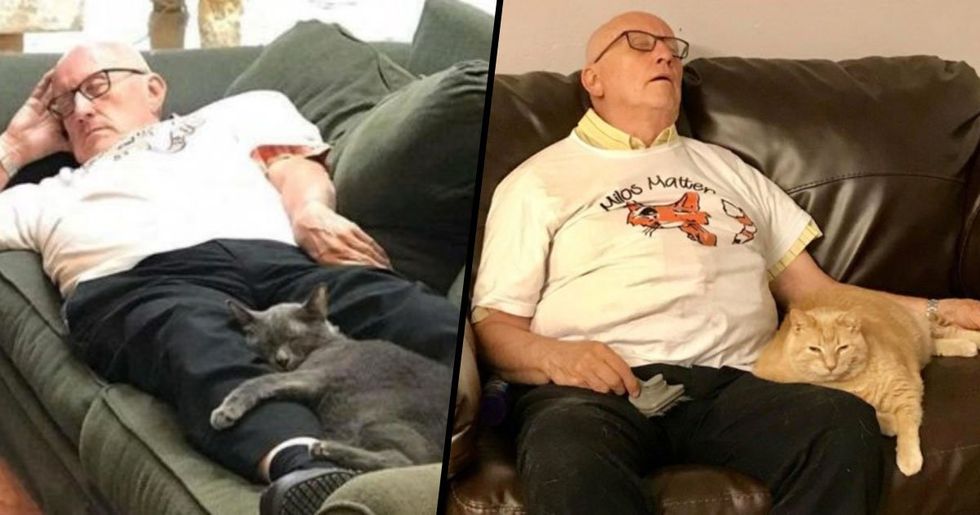 Imagine if part of your volunteer work was snoozing? Well, that's exactly the case for one cat-loving seventy-five-year-old, named Terry Lauerman, who attends his local cat sanctuary every day and naps with the cats.

The Safe Haven Pet Sanctuary takes in disabled cats that would otherwise be at risk of euthanasia in other facilities and gives them, well, a safe haven. But the shelter's unique volunteer has been making waves with his snoozy charitable act.

Keep scrolling to learn about the unlikely story of how Terry became a volunteer and to see the adorable snaps of him in action for yourself.

Based in Green Bay, Wisconsin, the shelter rescues cats with physical or psychological disabilities.

The cats would be at risk of euthansia in other facilities.

The shelter is the first nonprofit, no-kill, cat sanctuary and adoption center that specializes in saving kitties with special needs.

...both of which are also at risk of being put down in other shelters.

Vistors can come and socialize with the shelter's vast array of fluffy goodness.

Cat-lovers can come in, grab a drink, and bask in all the cat-related glory.

The cats even join in with exercise classes...

Exercising with kitties? We couldn't think of anything better.

The shelter is funded by donations.

And it's thanks to the dedicated volunteers that the cats are able to have a happy environment to reside in.

But there's one volunteer, in particular, that's become quite the famous face in the shelter.

Warning: dangerous levels of cuteness are coming up.

The seventy-five-year-old, known as "Grandpa Terry" volunteers at the sanctaury every day.

6 months ago, he turned up to the shelter with a cat brush in tow.

According to the shelter's founder, Elizabeth Feldhausen, Terry "just walked in and started brushing," despite never formally asking to become a volunteer.

After he continued to stroll in to groom the cats, he was offered a position as a volunteer.

"So eventually we told him he was an official volunteer and had him fill out our volunteer form," Feldhausen explained.

Apparently, he really enjoys his unpaid gig and says that sprucing up the kitties is a "great experience" for both them and him.

But there's one part of his cat-grooming routine that's become more and more of a regular occurrence...

The seventy-five-year-old frequently dozes off alongside the cats. “[He sleeps for] about an hour, then he’ll wake up and switch cats."

His habit of napping has clearly tugged at the heartstrings of the staff...

"We are so lucky to have a human like Terry. Terry just came along one day and introduced himself. He said he'd like to brush cats. Eventually, it became every day," the staff wrote on the sanctuary's Facebook page. "He brushes all of the cats, and can tell you about all of their likes and dislikes."

The staff describes Terry as a "wonderful volunteer."

"He also accidentally falls asleep most days. We don't mind - Cats need this! Terry is a wonderful volunteer."

The post how now garnered thousands of shares. After hearing the news of his newfound cat-fame, Terry is hoping it will encourage more people to donate: "Now if all of those people would just donate $5 to help the kitties, that would make such a big difference!" You can donate to the Safe Haven Pet Sanctuary here Want more cat-related content? Keep scrolling to learn more about a new breed of kitties with curly coats.