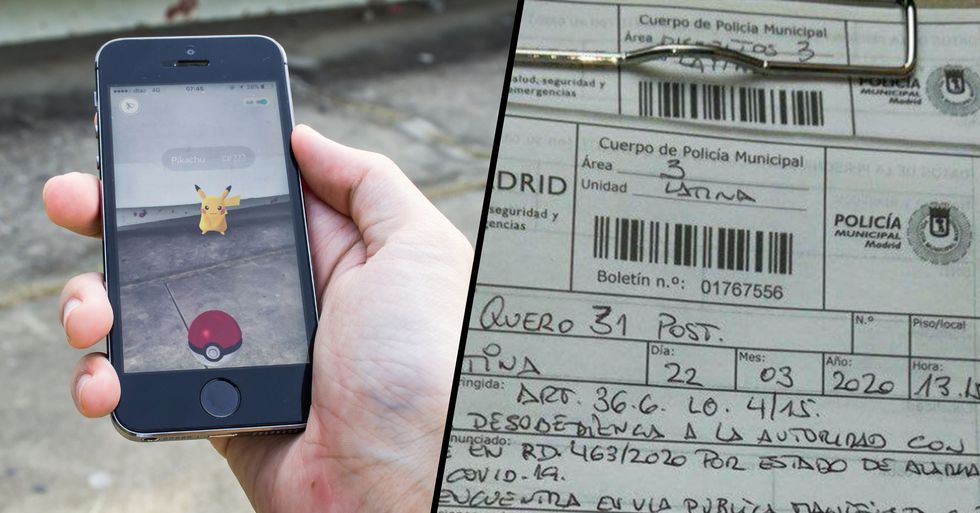 Right now, many parts of the world are experiencing lockdowns during the coronavirus pandemic crisis.

Governments have been implementing strict conditions during these lockdowns and civilians can face fines if they are spotted out in the open too much.

And this has landed one 77-year-old with a hefty fine.

Many parts of the world are currently experiencing lockdowns...

And as scary as this may seem, it is absolutely vital during the COVID-19 pandemic.

We are all well aware of the coronavirus crisis that is sweeping across the planet right now...

ARY has started disinfection and sanitization of its offices as part of our effort to keep the ARY Family safe. Thi… https://t.co/tORJiVKKvb
— Salman Iqbal ARY (@Salman Iqbal ARY)1585127844.0

And it's safe to say that it has brought the entire world to a standstill.

And what the most concerning thing is...

Is that it doesn't seem to be slowing down.

A lot of people have now died globally.

18,957 to be precise. A further 425,902 people have also been tested positive for the virus and are currently infected.

Because of the rapid spread of the virus...

Shout out to the health care organizations being careful here in WA, with docs visiting patients first in their veh… https://t.co/HakTioDy7s
— Trent Dale (@Trent Dale)1585100129.0

What exactly does it mean to be in a "lockdown?"

When a government declares a nation-wide lockdown, it requires civilians to remain in their homes at all times and they can only leave to either shop for essentials, do 1 hour of exercise, or to travel to work if they absolutely cannot from home.

Even though the thought of staying at home and relaxing for the foreseeable future isn't all that bad...

The reality of being in a lockdown isn't all it seems.

Many countries are now in lockdown...

Including China, Italy, Spain, Germany, the United Kingdom, New Zealand, parts of the United States, and many more.

And the prospect of sitting indoors with no company and nothing much to do is extremely hard for many.

Many are missing the things that they once took for granted...

Such as taking the dog out for a walk, or having a stroll in the local park.

And the worst thing is...

Governments around the world have given permission for authorities to fine people and use legal action against those who don't stick to these lockdown conditions.

And some people simply cannot stay cooped up in their homes for days on end.

Especially when it comes to playing Pokemon Go...

Now, who remembers Pokemon Go? The hype has very much died down since the GPS game was released in 2016, but it is still very popular amongst gamers and Pokemon fans.

But it seems that some people just simply couldn't resist searching for those Pokemons...

Gotta catch them all, right?

One of these people was a 77-year-old man from Madrid.

The elderly man was recently arrested because he was eagerly hunting for pokemon down the deserted streets of his neighborhood.

The bizarre news was shared on Twitter by the Policía Municipal de Madrid.

They wrote, "Hunting #Pokemon, dinosaurs or any other magical creature is PROHIBITED during the Alarm State. Don't make excuses and #StayatHome #SocialResponsibility #COVID19."

This goes to demonstrate how seriously governments are taking this crisis...

And it turns out that this optimistic pokemon hunter isn't the only one to be arrested for breaching the conditions of the lockdown, with the Policía Municipal de Madrid having issued 4,850 complaints and detained 30 people since Spain declared a State of Emergency on the 14th of March until Sunday, according to TeleMadird.

It really isn't worth it...

Fines issued for breaching the restrictions put in place to prevent the spread of Covid-19 can range from €600 to €30,000 ($648- $32,400). Very serious incidents can also result in custodial sentences - 3 months for disobedience and 4 years for an attack on authority.

We're sure that this man well and truly learned his lesson...

Don't Pokemon outside, guys! Keep scrolling to learn about the clinical trials that are about to begin in New York...