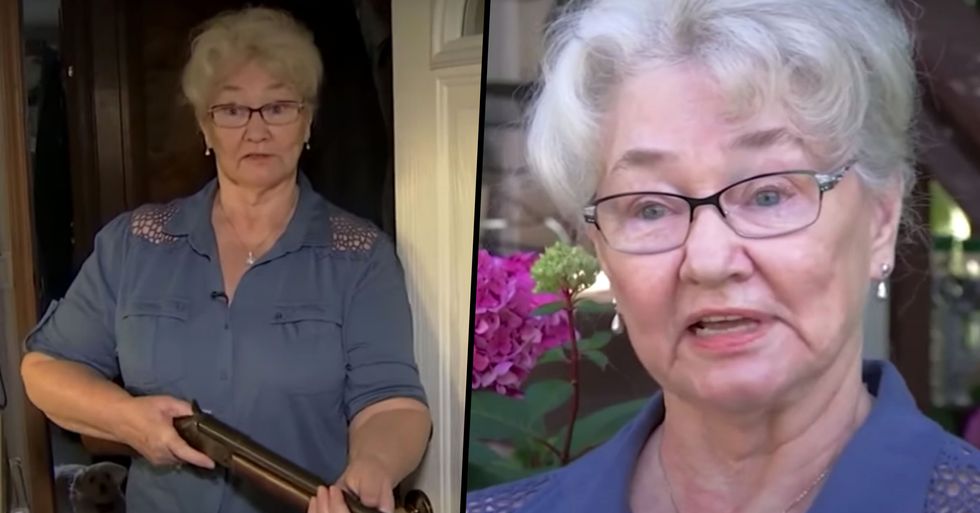 A seventy-eight-year-old grandmother held up a burglar with her shotgun when he tried to steal from her house.

This is perhaps the most badass thing you'll read all month...

Many people perceive the elderly as vulnerable, easy targets...

But one grandmother has recently proven that this isn't at all true.

The seventy-eight-year-old decided to take no nonsense when an intruder broke into her home...

And she wasn't afraid to use her trusty shotgun to fend them off.

Now, we're all at risk of our homes being broken into...

And for the majority of us, it's one of our worst nightmares!

The thought of someone snooping around our home and going through our belongings is unbearable...

And in more extreme circumstances, burglars can pose a huge threat.

Encountering a burglar in your own home can become dangerous...

And people who live in areas that are prone to break-ins make sure they're prepared for such an event.

But a Washington state grandmother has taken being prepared to a whole new level.

Seventy-eight-year-old Sandy, who lives in Spanaway, recently encountered a burglar in her home face to face.

Now, one would expect a woman of her age to be unable to defend herself...

But Sandy proved very well that she wasn't a woman to mess with.

Speaking to KIRO-TV, she explained how she knew something was wrong when her dog, BooBoo, started "barking nonstop."

"I opened my door and standing right two feet from me, was a man. We looked at each other for a few minutes and he turned and started to leave, and I said, 'Oh no you don't. You stay right there'," she explained.

"I reached over and got my shotgun and I cocked it and I told him to stay right there because he was going to turn and walk away."

Yep, you read that correctly...

The grandmother pulled a shotgun on her intruder.

The grandma had regained full control of the situation.

"I told him to go out, sit on the steps. I followed him out, and when he got to the bottom of the step I told him to sit down. I just stood there with the shotgun waiting for the police to come," Sandy went on to say.

She wasn't going to let the suspect getaway.

Her neighbors have been plagued with intruders recently and quite frankly, Sandy had had enough.

Sandy kept her cool throughout the entire ordeal, however.

"I was totally calm, really, and truly. I thought this is amazing! I said, 'You know, I've got grandchildren your age'."

Sandy added that she was alarmed with the suspect's answers when she asked him why he had broken in.

"He said, 'Well you know, I was really hoping to get laid.' That perked my ears up. That made me think, 'Oh my God,'" the elderly woman explained.

And after they arrested the suspect, they said it's thanks to her bold actions they caught him.

But Sandy said she's just grateful no one was hurt.

"After he was so meek and mild and sat down as I told him to do. Empowering! I felt like at least I was in charge. I wasn't afraid," she said.

Since Sandy's story was covered on the news, it has gone viral...

And people are seriously impressed with her quick-thinking actions.

Especially a woman of Sandy's age!

And not forgetting BooBoo the dog...

If it wasn't for her little dog, things could have ended up a lot worse for Sandy!

Take this as a lesson, kids...

Do not break into people's homes! For more, keep on scrolling to read about the man who was hired for a "fantasy break-in" and how he broke into the wrong house...