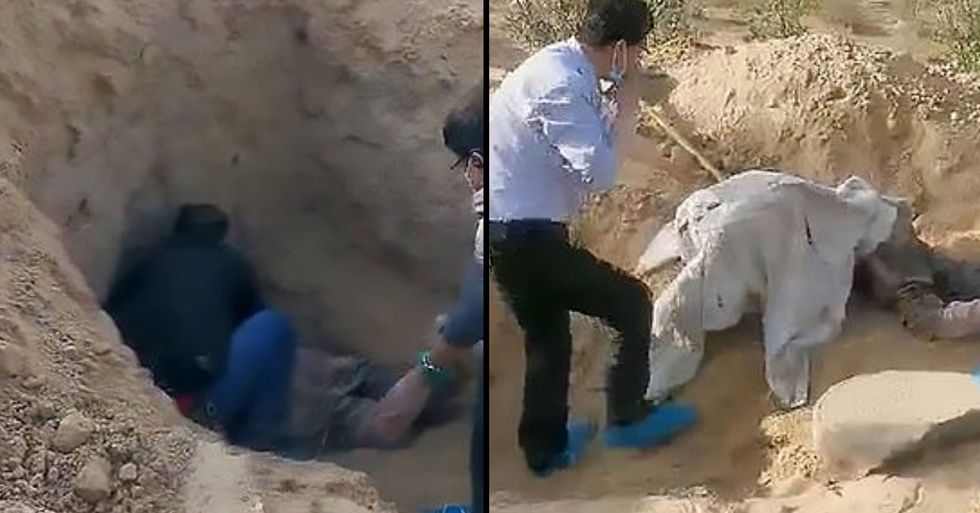 The shocking news has come in that a seventy-nine-year-old paralyzed mother was buried alive by her very own son.

Keep scrolling to learn about her miraculous rescue after spending 3 days underground...

A graveyard is certainly up there as one of the most dreaded.

Those with slightly darker minds may have worried, or simply wondered, about what it would be like to wake up in a graveyard or a morgue.

But, for one unfortunate woman, this nightmare recently became a reality.

A seventy-nine-year-old mother in China woke up after being buried alive in a graveyard by her very own son. Keep scrolling to get the full story...

It sounds completely horrifying, doesn't it?

How on earth can you mistake a living, breathing human for a corpse? Well, here's the explanation...

Ma Mou, who is fifty-eight, is the son of this unfortunate lady...

And the elderly woman who resided in north-western China's Shaanxi province, whose name is currently unknown, has been paralyzed for several years now.

Ma's wife noticed that earlier this week, her mother-in-law was missing...

So she alerted the authorities on Tuesday after noticing her husband had taken his mother out on Saturday but didn't return with her.

The son had an alibi, but people weren't convinced.

Ma reportedly said he had sent his mother away to stay with relatives, but his wife soon became suspicious.

Jingbian Police launched an investigation into her disappearance and the 58-year-old suspect was summoned to the police station...

And it didn't take long for the man to confess to burying his mother in a deserted tomb, south of Jingbian County.

She was still alive when her son buried her.

When officers arrived at the site they could hear faint cries for help - she was miraculously still alive after 3 days of being buried.

Shocking footage emerged from when the officers made their grisly discovery...

They found the burial pit and they managed to dig the unfortunate woman out.

She was rushed to hospital immediately...

And incredibly, she remains in a stable condition.

Ma has been detained on suspicion of attempted murder and remains in custody...

Which, by the looks of things, is exactly what needs to be done.

People all around the world have been left mortified by the ordeal...

And many have questioned how on earth someone could do this to their own mother?!

This man clearly didn't care for his mother...

We hope the unfortunate lady makes a quick recovery soon.

For more bizarre stories, keep scrolling to read about the man who found something extremely disturbing in his mom's freezer...