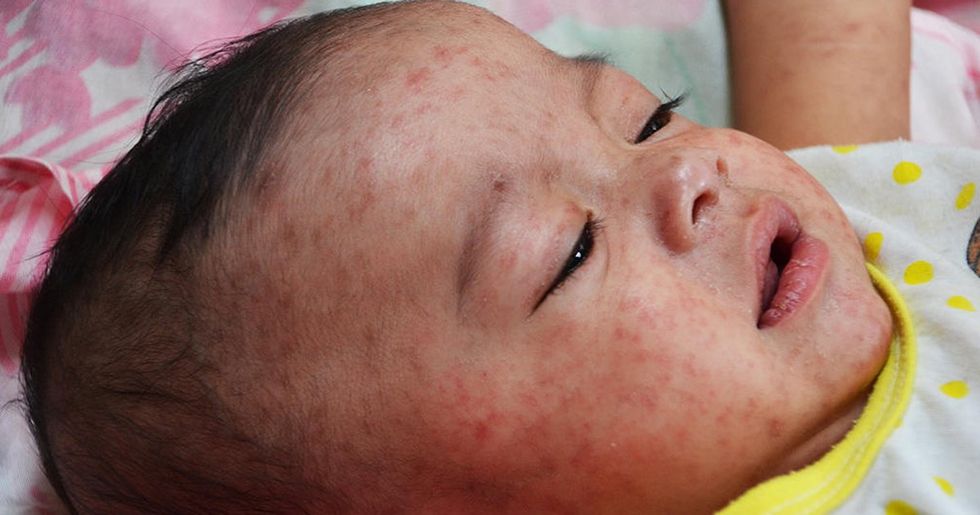 8-Month-Old Baby Gets Measles Because of Anti-Vaxxers

With the recent outbreak of the measles in the news, surprisingly, it is not slowing down the anti-vax movement. But, it really needs to. Like, this nonsense needs to stop! Because anti-vaxxers are putting many innocent children at risk.

Innocent children such as those under the age of 1 who cannot yet get the MMR vaccine.

Innocent children like those with compromised immune systems due to childhood cancer and other serious health conditions.

And let's not discount the elderly, who too, are at risk for the selfishness of those who go against what doctors, scientists, and the CDC advise the public to do – for the safety of everyone. Vaccines have been proven to be safe, and yet, some just aren't listening.

This baby, Shira Goldschmidt, contracted the measles virus at just 8-months-old and her mother is pleading with the public to listen and to see how serious this virus can be.

Fainy Sukenik is a mother to 4 children. She believes in vaccines.

But her youngest, Shira, has not received all her vaccines yet because of her age.

And unfortunately, Shira contracted the measles at just 8-months of age.

And her mother is furious that her baby got this virus. Knowing full well it's because others choose not to vaccinate.

And health professionals agree with this mother.

Infectious disease experts say the cause is clear: anti-vaxxers. And so the question becomes, how many more children have to suffer because of others' selfish acts?

Little Shira suffered complications from the virus and had to be hospitalized.

The family lives in Israel, but the virus is spreading like wildfire here in the states because of people who refuse to vaccinate their children.

If you want a firsthand look to see why this virus can be fatal, this photo shows Shira when she had the virus.

And tell me? If you knew of a way to prevent your child from getting this horrible virus, wouldn't you do it? Even after studies upon studies have shown the MMR vaccine to be safe and not only that, it once eradicated the measles.

Babies do not receive their first dose of the MMR vaccine until the age of 1.

And yes that means even parents who intend to vaccinate their children are still at risk. Just as Shira was.

The reason the measles is spreading is quite clear: anti-vaxxers.

When a child who is not vaccinated leaves their community, they are a threat to everyone who does not have immunity to the virus.

"I wrote to the anti-vaxxers, you are hurting our kids because of your choice."

Experts agree with this mother.

In fact, Dr. Peter Hotez, a vaccine scientist at Baylor University, said "It's absolutely inevitable" for the same scenario to happen here in the states.

And we are already seeing this happen here. To date, there have been 555 cases of measles reported in the US.

According to CNN, "2019 now has the second-highest number of measles cases in the United States in 25 years" -- and the year isn't over yet. This is an epidemic, folks.

And just like this mother, I beg anti-vaxxers to wisenheimer up and look at the facts!

Shira's symptoms started with a high fever and runny nose. Their pediatrician told them it was just a virus and she'd be better soon. But baby Shira wasn't. Because days later she developed red spots and her parents knew it was something more.

In an emotional Facebook post, Shira's mom said that the spots appeared everywhere on her daughter's body.

"Inside her mouth, between her fingers, in between her toes," her mother said. "I'm an experienced mother, and never ever have I seen something like this. I was really scared."

She went on to say that anti-vaxxers should, "stay in enclosed areas or hold a big banner noting that you are anti-vaccine."

And I wholeheartedly agree. How else are we to know that their children could spread this horrific virus to our children?

The mom asked the question, "Are you ashamed that you don't vaccinate?"

"No, you're not ashamed. So you should wear a sign and let me choose whether my kids will play with your kids," she said in an interview with CNN. Full Mama bear mode and who can blame her? I know I don't.

Guess you can say she was lucky that she didn't get pneumonia, as some children do with the measles.

Apparently, several years after someone contracts the measles, they can develop a disabling and deadly brain disorder.

The fatal disease of the central nervous system is called Subacute sclerosing panencephalitis (SSPE). The CDC says, "SSPE generally develops 7 to 10 years after a person has measles, even though the person seems to have fully recovered from the illness."

With the knowledge of this scary fact, this mother is not going to rest easy.

What mother would? Especially since she is aware that this brain disorder may be higher for a person who gets measles before they are 2-years-old.

But for now, they are celebrating Shira and relieved she overcame this deadly virus.

Her mother said, she is happy and has started walking. And that her Facebook post received over 4,000 comments. Of course some bad comments with the good.

And believe it or not, some called her a bad mother.

Makes you wonder the nerve of someone to harass a mother whose child had to endure such complications. But that just goes to show you that some people are truly asinine.

Asinine to theorize that Shira possibly had a "genetic defect."

But the nay-sayers cannot sway this mother's opinion. "If they want to pick a fight with me, I am not afraid," she said.

She went on, "I've seen in my own home what it means for a baby to have measles, and the responsibility is on us to make sure this epidemic goes away and this doesn't happen to another baby."

Indeed she is correct. The responsibility weighs on all of our shoulders. Yours, mine, our neighbors. It is this responsibility or lack thereof that affects innocent children.

The outbreak that is currently in the US isn't as large as the one in Israel where Shira is from.

But little does that matter. The measles is super contagious. For example, a baby can get the virus simply by entering a room where someone with the measles had been 2 hours prior.

And let's not forget that this virus can be deadly. "1 out of every 20 children with measles gets pneumonia, the most common cause of death from measles in young children," says the CDC.

Pregnant women are also at risk, as the measles can make them give birth prematurely.

Medical experts and doctors are weighing in on these recent outbreaks in the US.

"It's just terribly sad that children in the US are having to suffer measles. This should not happen," said Dr. William Schaffner – medical director of the National Foundation for Infectious Diseases and an adviser to the CDC on vaccines.

He continued to say that we "previously eliminated this disease. And not just here in the states, but the entire Western Hemisphere."

How sad is that? We have gone back in time and definitely not in a good way. Certainly not in a way that betters our public safety.

And not because there is proof that vaccines, namely the MMR, is not safe.

Because there is no proof. There are theories. And we know as a society, there will always be conspiracy theories.

And as the anti-vaxxers gain momentum, we should be scared.

Scared that everyone is a potential threat. Because many do not share their opinions on vaccinations and just don't vaccinate and that is a problem.

Maybe Shira's mom is on to something.

Make anti-vaxxers have a banner or something to show they are against vaccines. In New York, officials are actually charging those who have not been vaccinated against the measles or show immunity to the virus, $1,000 in neighborhoods affected by the outbreak.

And cry about it all you want. But something has to be done to stop this threat to others.

I am pro-vaccine and while I know that science is not perfect, this story speaks volumes as to why the MMR vaccine was created in the first place.

While we may not like the government mandating vaccines, you can see why officials are leaning towards that.

For the greater good. For the safety of our families. A once eradicated virus is making it's return. That is not OK. Wouldn't you agree? Vaccination is the smart choice, the right choice.