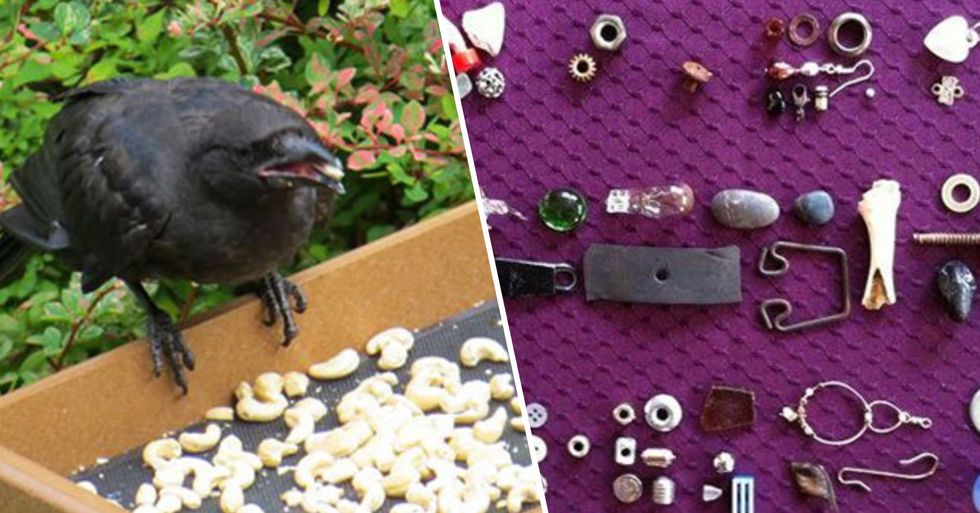 Animals have peculiar ways of showing affection, whether their wild animals or house pets, they understand and are grateful when we show them kindness.

Birds, in particular, have been found to be very intelligent creatures, more like feathered apes than bird brains. They have been known to bring objects of gratitude to people who help them.

And that's exactly what happened for one little girl who had a special affinity for her flying friends...this video is unbelievable.

We really don't deserve them.

Some say they'd be better off without us.

But that isn't the case for these adorable creatures, that have shown appreciation in the best way to their human saviors...

This little squirrel has been visiting the family that saved him for 8 years.

When Brantley Harrison and her family found a squirrel that had been wounded by an owl, they cared for her and treated 'Bella' for 5 months.

After that, it was time to say goodbye...

They released Bella back into the wild, however, that wasn't the last time the family got to see their furry friend, Bella didn't forget their kindness and continues to visit the family every day, even after so long.

This swan is hugging its rescuer...

These birds are famous for being aggressive and hostile if you tried to do this to just any swan, I guarantee you'd regret it.

But Richard Weeze wasn’t too scared when he noticed this bird got its head stuck in a fence.

To say thank you for saving him, this wounded swan hugged Weeze, and put its neck around his. What a moment!

Birds are well known for showing appreciation to those that help them.

In the most peculiar ways...

Especially crows, which might come as a surprise to some...

But there have been many cases of crows bringing offerings of thanks to helpful humans...

Sometimes they can even be exactly what you're looking for...

Which is was happened to Amethyst Selma-Selene, from the UK, you won't believe what happened...

Selene had lost an item of jewelry, that was returned just weeks later by magpies, members of the crow family.

"I bought this beautiful Victorian pentacle from America and I had it just one week before I lost it. Three weeks later, on a Sunday morning, I was off to my little shop when three magpies started to swoop down at me chattering loudly."

This is the necklace that Selene thought she'd lost forever...

"Then they swooped down on to the road near the edge of the pavement. This went on for about three minutes until I stepped out on to the road to try and avoid the magpies' behavior. It was then I noticed something shining on the road. And there was my Victorian pentacle on the road. They were showing me where it was, and I was amazed to find it again."

It sounds too good to be true...

But surprisingly many others have experienced the same thing...

Recently one girl has shared her own story, after receiving gifts from her neighborhood crows.

Lots of people love the birds in their garden, but it's rare for that affection to be reciprocated.

One young girl in Seattle has experienced this unusual behavior for herself...

8-year-old Gabi Mann has a collection of small, special gifts that, every once in a while, get delivered to her home.

She saves all the treasures that come from her special group of friends.

The local crow population being the ones that bring her trinkets to say thanks for feeding them, which she has been doing since she was just 4 years old.

She has collected quite a few of these gifts over the years...

Some of which include; buttons, LEGO pieces, scraps of metal, and even a heart-shaped bead.

She keeps them all in a plastic container, where she labels some of her favorite trinkets.

Once, Gabi even got a piece of metal with the word “best" on it.

We're unsure whether they kept the "friend" part, but part of me feels they might have.

They even went as far as returning a camera lens cap that Gabi’s mom had lost!

They are pretty incredible.

Some things they find must be pretty valuable.

If anyone's running out of their stimulus check right about now, why not get yourself a handy murder of crows to dig out some lost treasure. For more animal news, keep scrolling to find out why one man was arrested for feeding zoo animals...